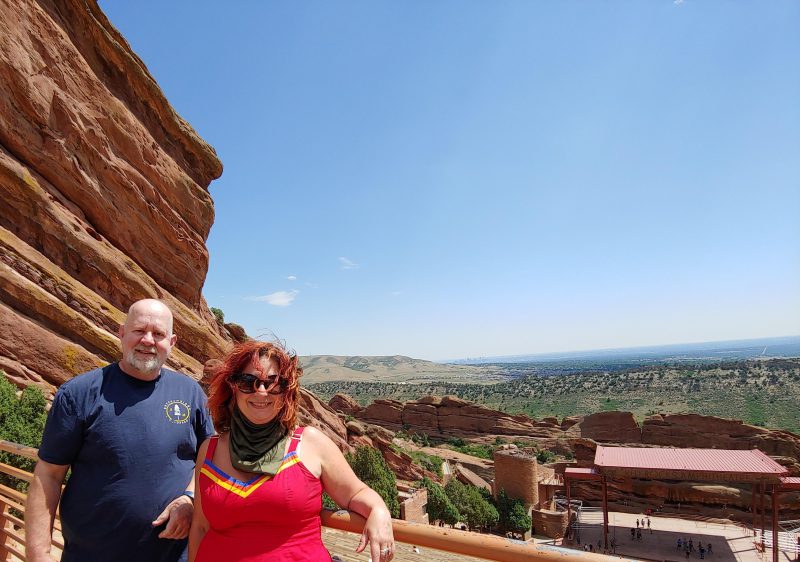 Our circle of the Rocky Mountains complete, today was our day to return to Denver – so on the way from Golden we stopped to see what might have been at the Red Rocks Park and Amphitheater, offered some prayers to St. Cabrini the first American Saint, and gave our respects to Buffalo Bill Cody at Lookout Point. 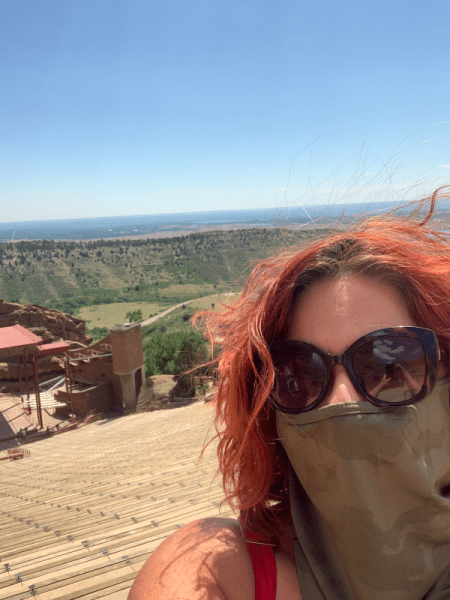 Our requisite nonrefundable night complete in our hotel in Golden, we were up with the sun and ready to roll. Our first stop, unbeknownst to Jeremy, was the St. Cabrini Shrine – she was on the way to see Buffalo Bill, so why not? St. Cabrini is the first American Citizen to be canonized as a Saint. She is the patron saint of immigrants as her mission was devoted to helping the children of Italian immigrants (where she was born the youngest of 13 children) in the United States. The Shrine in Golden, Colorado is at the location of a mountain spring she found, and the original location of a summer camp for orphaned girls. The story of St. Cabrini is a woman dedicated to helping children, and truly the life of a missionary. She was also spunky, connected, and resourceful – which got her in direct connection with the Pope (who encouraged her mission in the United States instead of China), and likely put her miracles on the map which resulted in quick canonization. 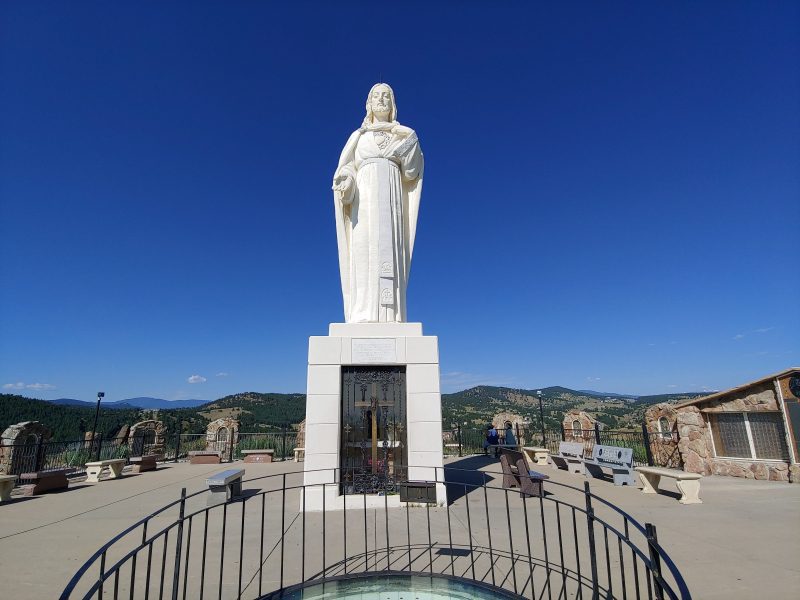 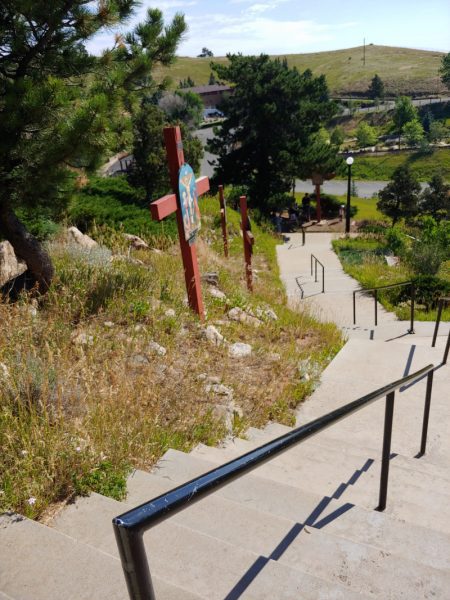 At her shrine in Golden there is a long set of stairs, marking her footpath up the mountain – along the stairs are the stations of the cross, and at the top is a statue of Jesus. We mistakenly believed it was a statue of her or Mary. Jeremy volunteered to climb up the stair for photos of the giant statue. 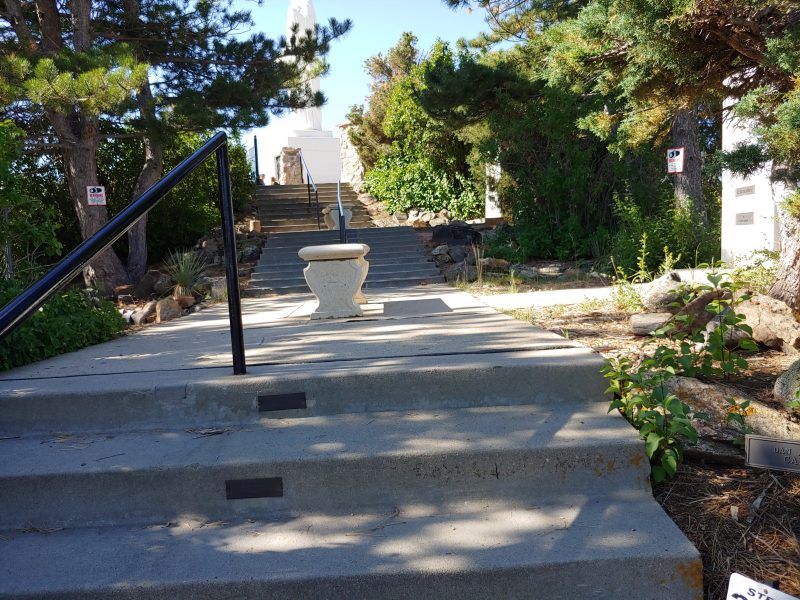 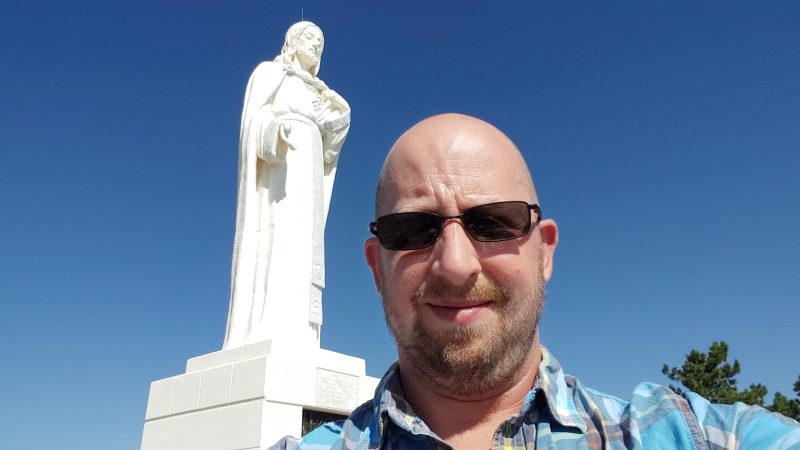 Meanwhile, I went to explore the gift shop where I ended up non-ironically purchasing St. Michael products, holy water, and lavender and rose scented products made from the miracle spring.  Meanwhile, Jeremy got severely winded walking up all of the stairs to the shrine, and found a number of people at the top, non-ironically worshiping at the shrine. In fact, a family from Texas was there, like they do, every year as a family. 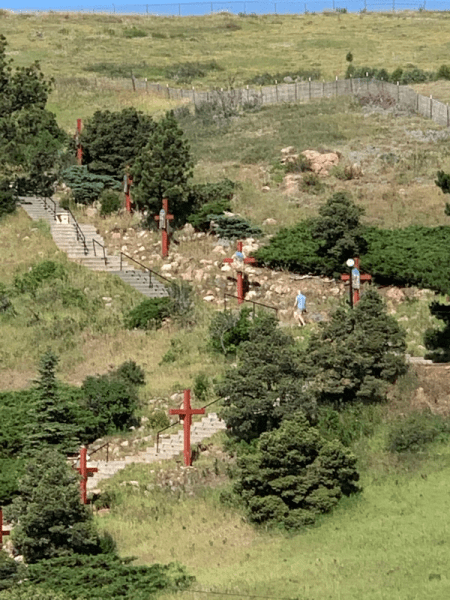 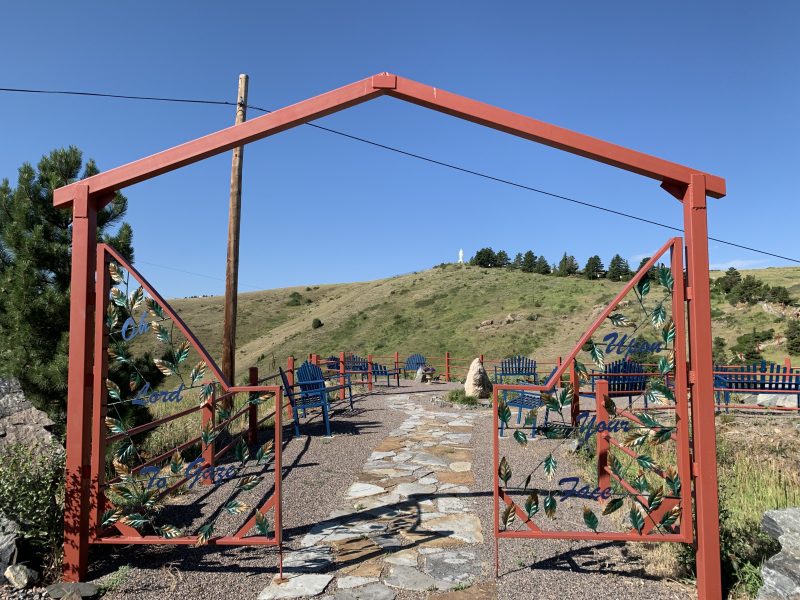 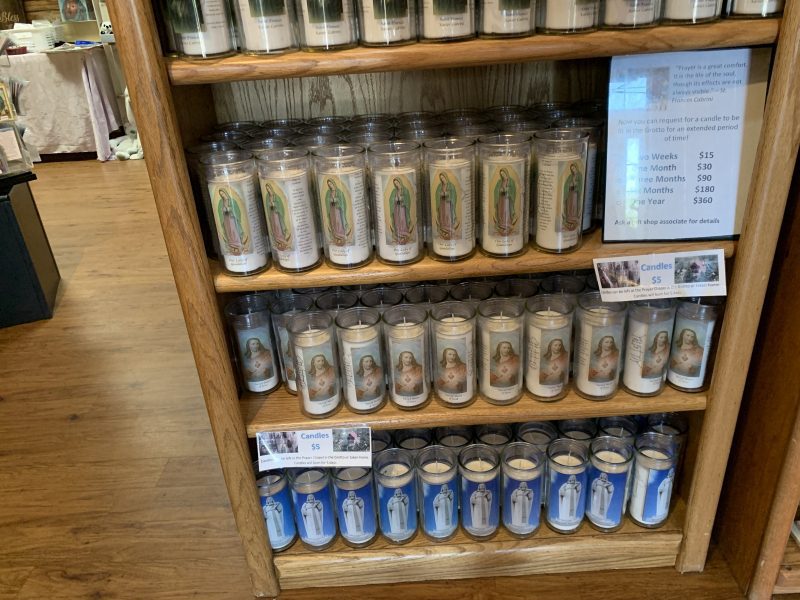 It is a very nice, very Catholic, and very large shrine including a chapel and a convent. If you are Catholic or spiritual and passing through Golden, Colorado I highly recommend it. We, as respectfully as possible, gathered our postcards and holy water and made our way back down and up the mountain to visit Buffalo Bill Cody’s Grave at the top of Lookout Peak. 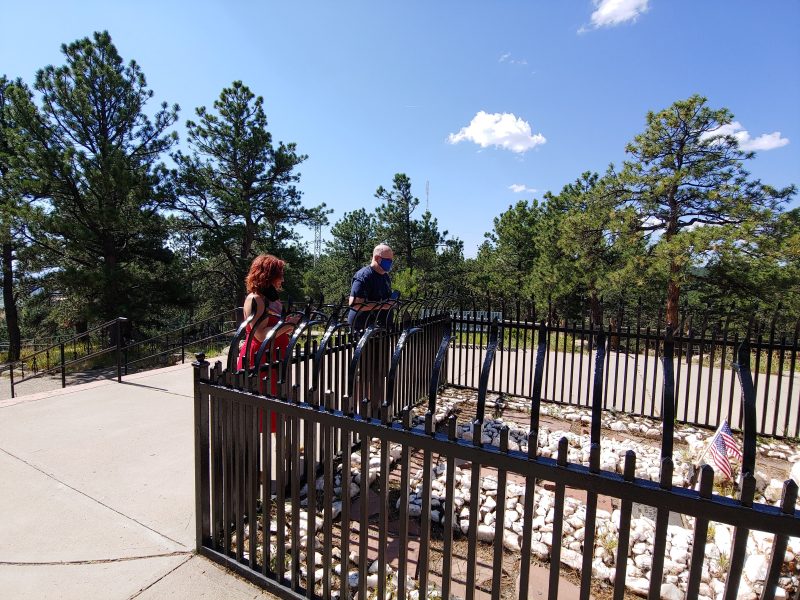 I didn’t know who St.Cabrini was until a googled her, but Buffalo Bill has been a figure in my imagination and psyche since I was a young person watching Westerns and the TV show Young Riders  (about the Pony Express) featuring an attractive but untalented Baldwin brother as Cody i.e. Buffalo Bill. 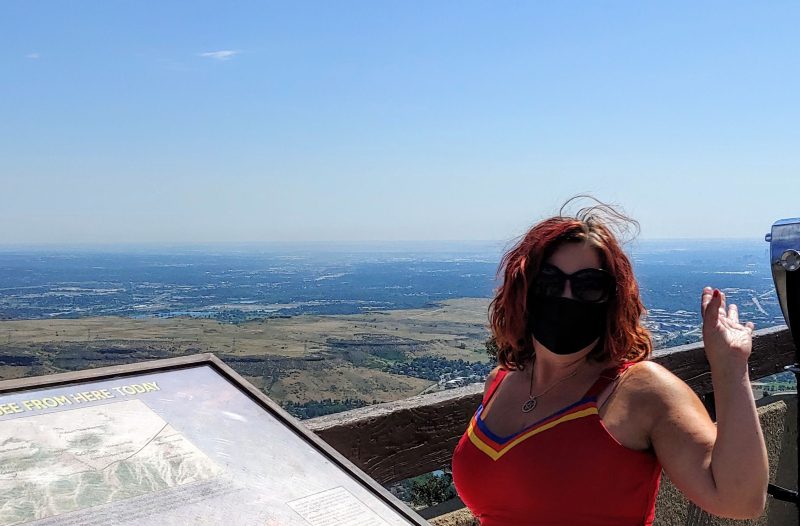 Historical Buffalo Bill was a Union Soldier during the civil war, a civilian scout during the “Indian Wars,” and a frontier entrepreneur with his famous Wild West show featuring Annie Oakley and other characters profiting off the image of the American Old West. 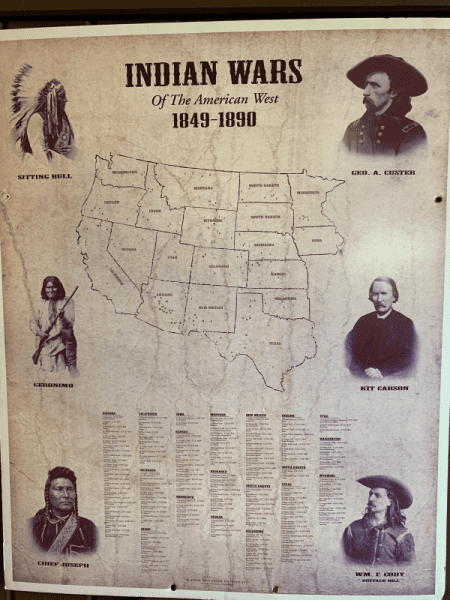 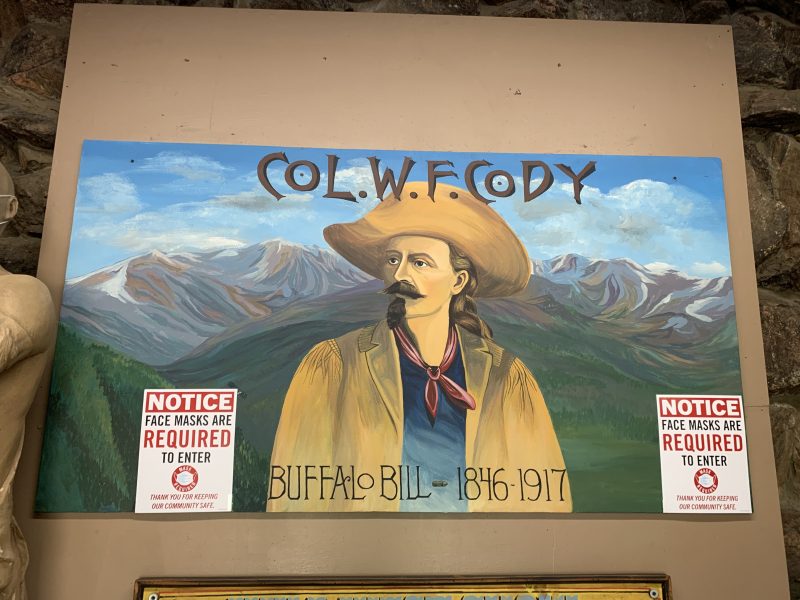 There is a controversy on whether or not the site at Lookout Peak is in fact Buffalo Bill’s grave, as his decision to be buried there happened late in life while in Denver with his wife. As the placard at the site explains however, there is about a 1000 pounds of concrete that will prevent anyone from stealing his body to Cody, Wyoming, or other locations they believe he should be interred. 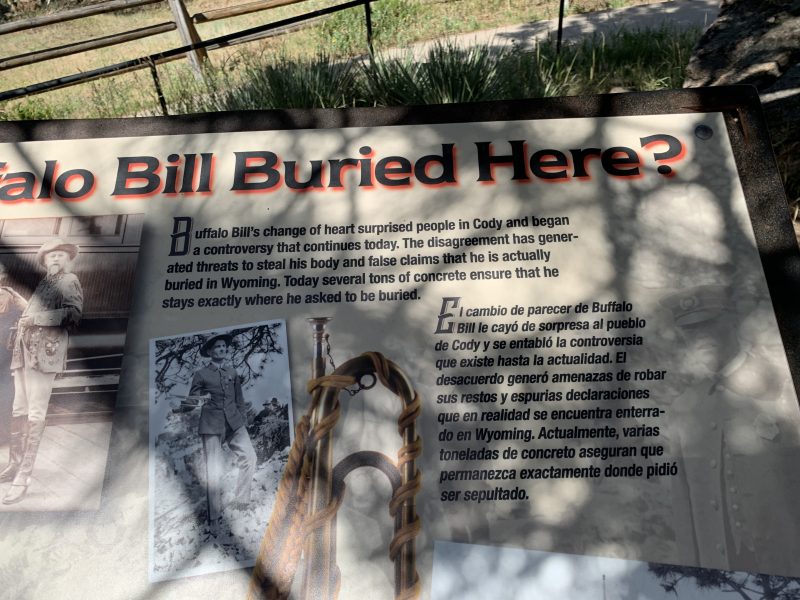 Meanwhile, the beautiful view that the location once enjoyed is now blocked in part by cell phone and radio towers, as well as the gigantic gift shop and small museum on the site. There are still lovely views of Golden, Colorado, however. 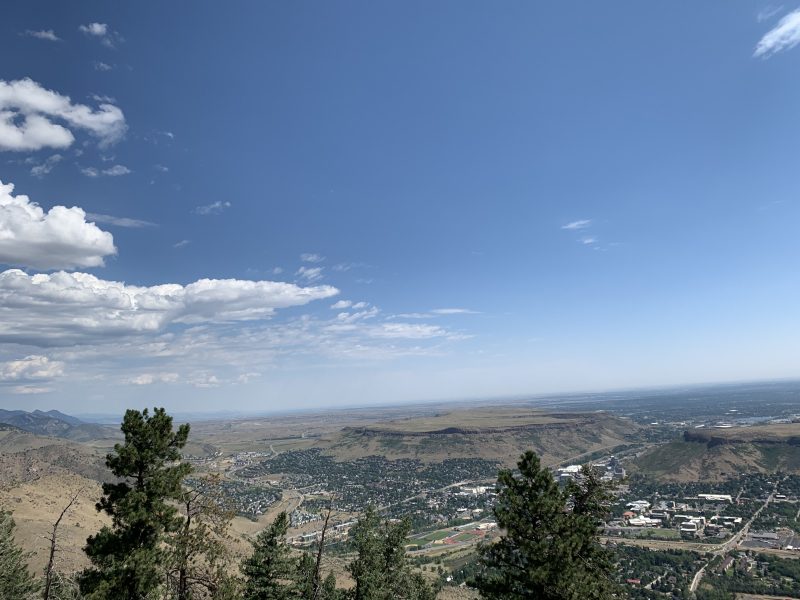 While I was in the gift shop starring at the wall of Buffalo Bill postcards, I found myself listening to a massive museum management argument – which sounded more like a family argument about someone not pulling their weight at the store. I pretended to be debating the very important choice of which Buffalo Bill postcard to purchase, while they argued in order to ease drop. In the end, it was not that interesting. 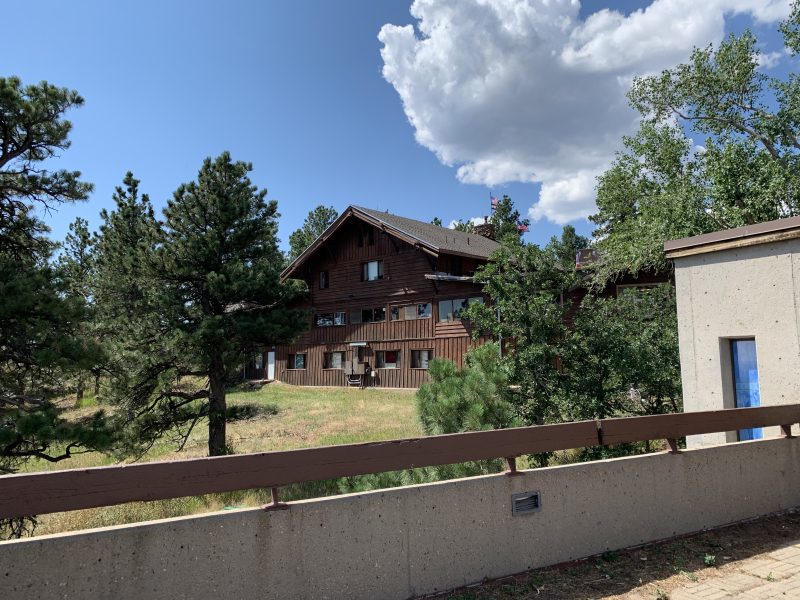 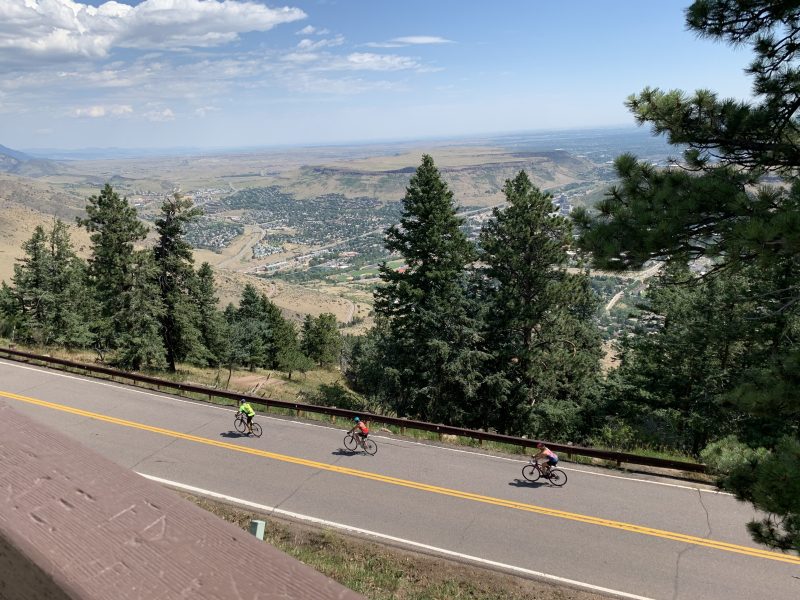 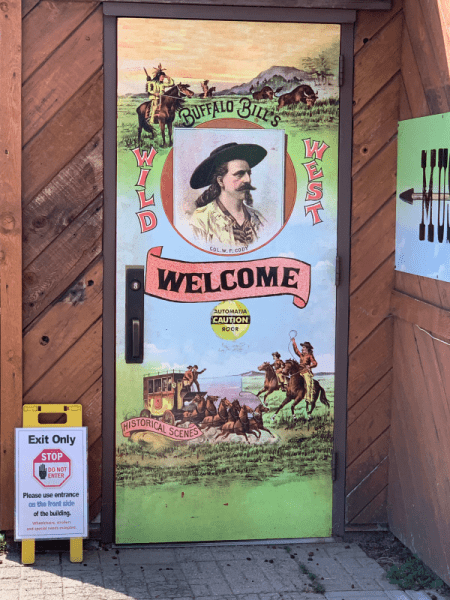 Wild West showman lore behind us we headed for Red Rocks Park & Amphitheater to see if we could get a view of the amphitheater we would not be seeing a concert in any time soon. Both the Colorado Music Hall of Fame, and the amphitheater were open for touring, so we took a look in the brutally hot mid-day sun. 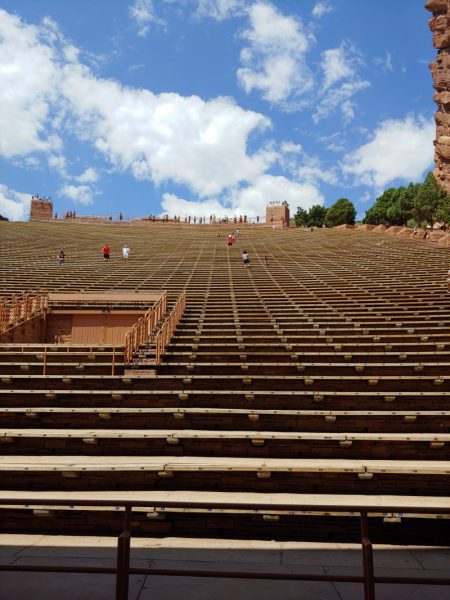 Jeremy climbed more stairs to get a look at our VIP seats’ location in the theater. The 9000 seat amphitheater was a lot smaller than I expected. This appears to be a theme in my seeing things in real life in Colorado. 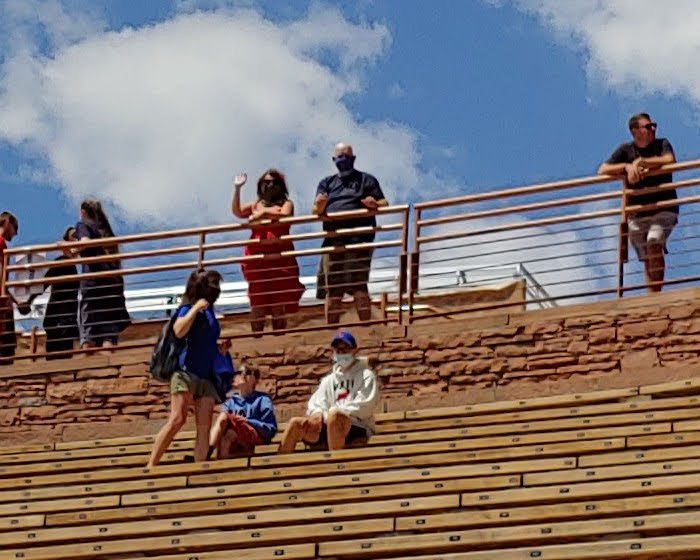 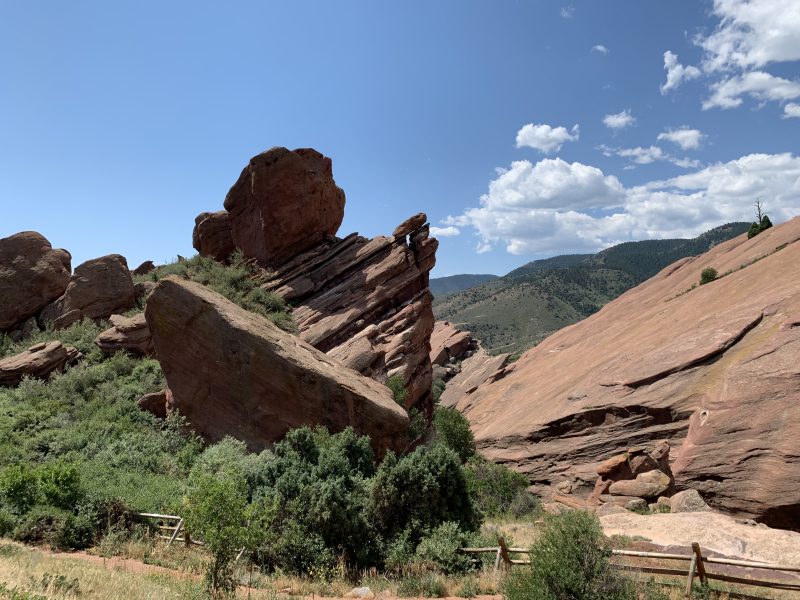 I did learn a lot about the history of the amphitheater which hosted its first concert in 1906, and was renovated into the iconic public space it is today as a public works project during the Great Depression, opening in 1941. The original founder of the amphitheater wanted it to be called the Garden of the Titans to compete with Garden of the Gods, however, Red Rocks is what stuck (as that is what the indigenous peoples called it). The City of Denver purchased the space and surrounding land for $54K in 1927 from John Brisben Walker with 728 acres that form the park around it. Currently, the park’s hiking trails are closed because of the public health crisis, but not the gift shop. 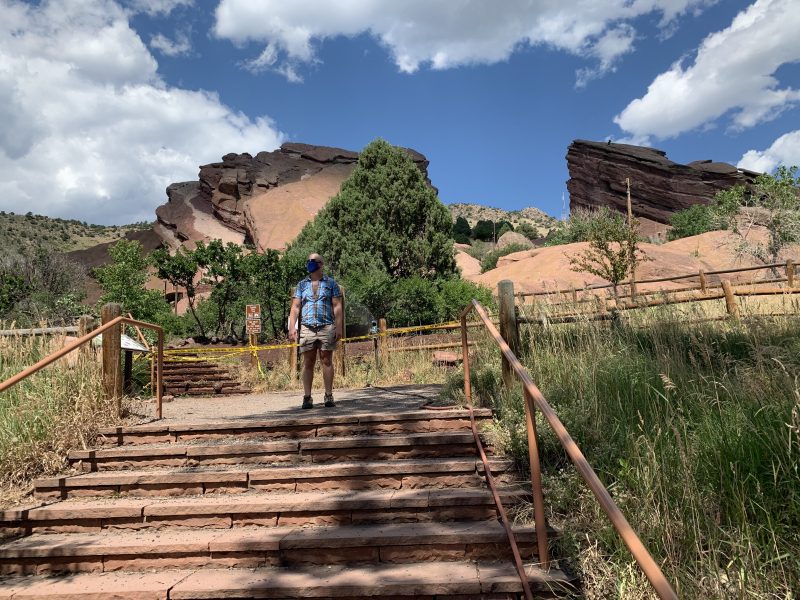 Parking, and getting out of the 9000 person venue does look like it could be a logistically challenging endeavor, and as we hope to be back next year for the postponed Trampled by Turtles concert, we made a mental note that it may be worth investigating shuttles, or ride share options if the concert does ever happen. 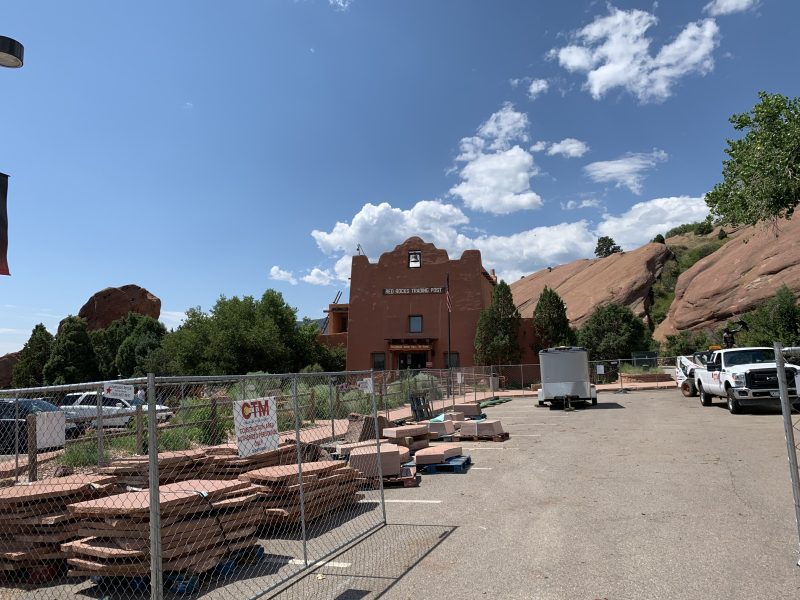 Quick note on the Colorado Music Hall of Fame – it is pretty much a tribute to John Denver and the music studio Caribou Ranch. 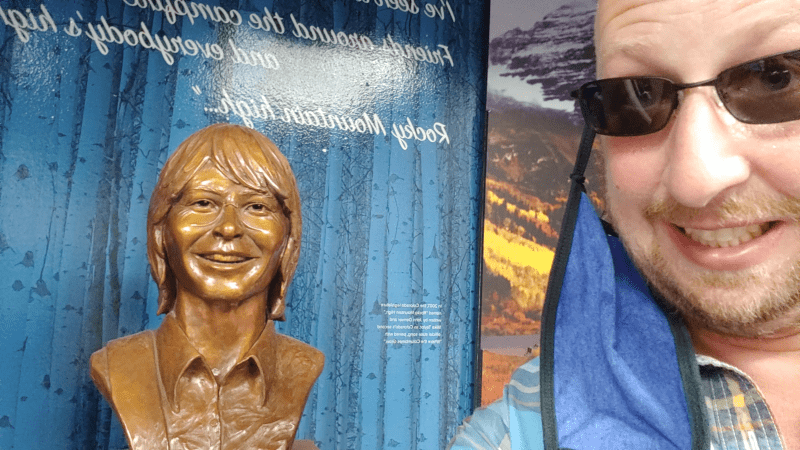 Perfectly baked by the hot Denver region high altitude desert like sun, we returned our rental Jeep, checked into our Denver Airbnb, and found an outdoor lunch spot to continue melting in the shade-less concrete jungle of Denver. I already missed the mountains as the 92 degrees that felt like at least 100 beat down outside our little umbrella at our outdoor lunch eatery.

After lunch we walked one block to the Denver Central Market to buy groceries for dinner. Although air conditioned, it was still hot inside there somehow, but the artisan shops including a lovely butcher featuring locally small farm raised lamb and beef, as well as a chocolate, cheeses, coffee and pastries. It was definitely my favorite way to shop in any new city I visit. 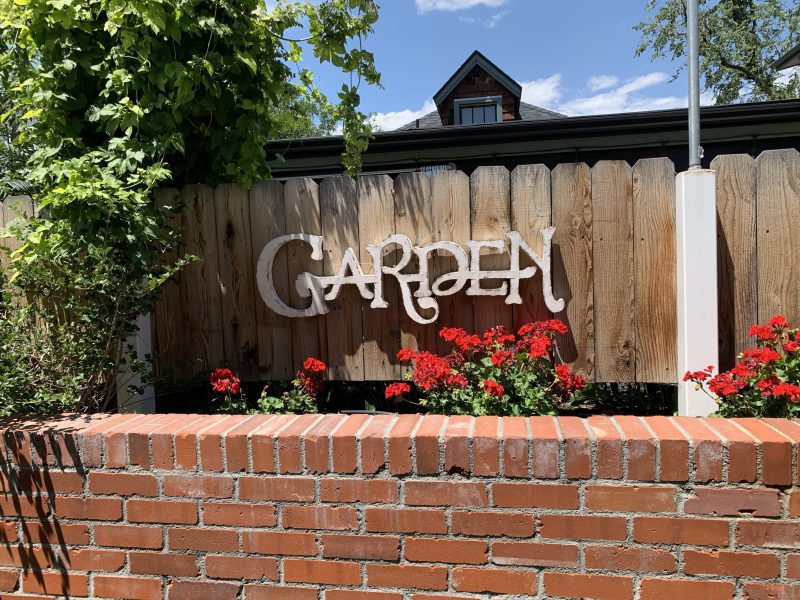 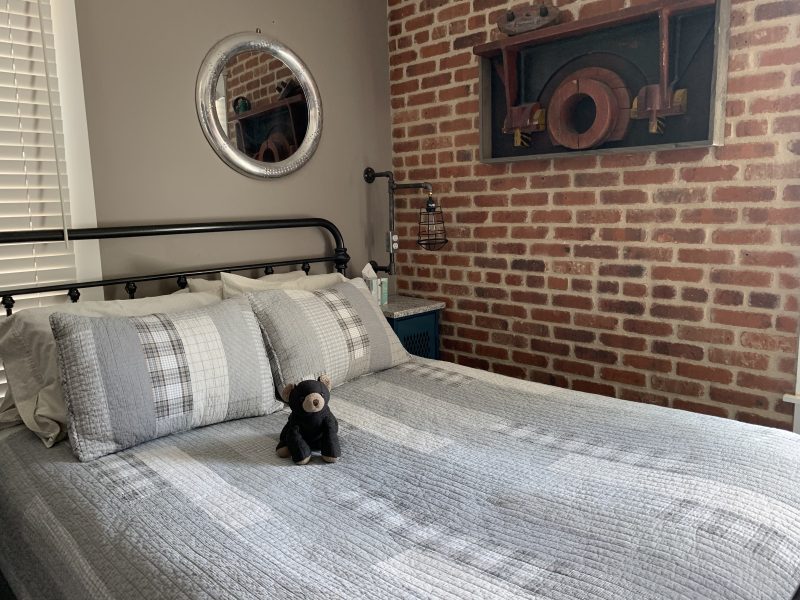 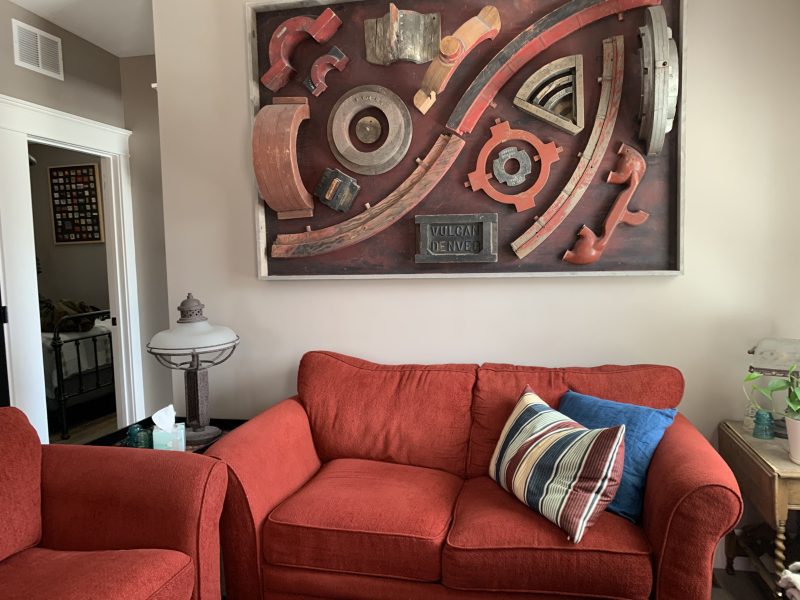 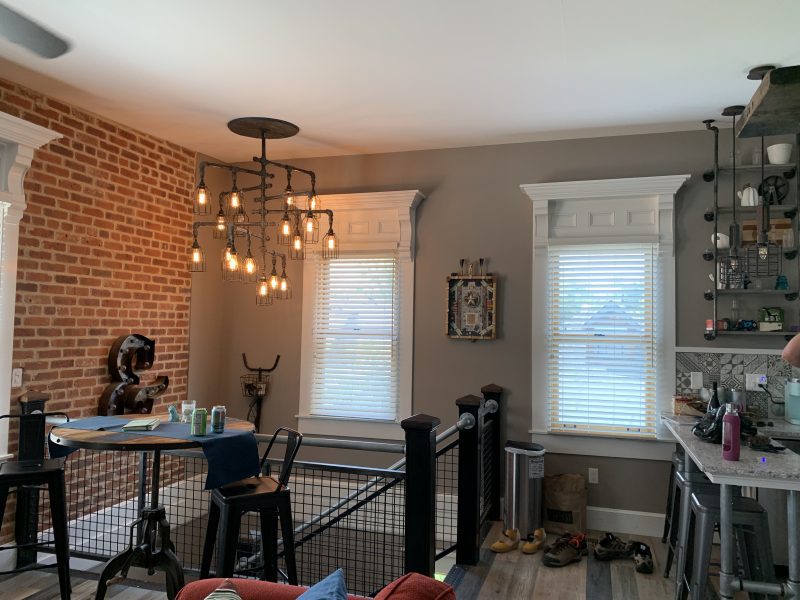 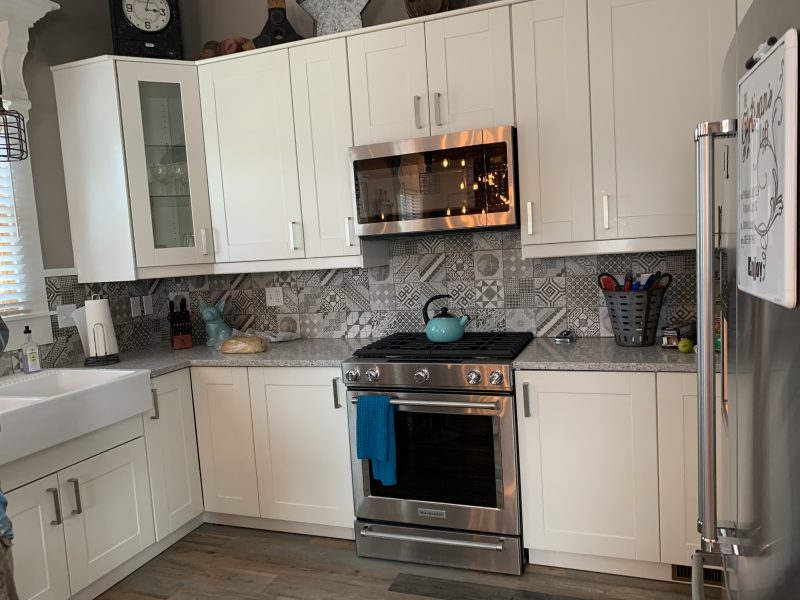 We then settled into our super cute Airbnb called the Artisan Loft in the 5 Points Neighborhood of Denver. It was air conditioned, we had our own kitchen, and the internet to cast music videos and concert footage from artists who played the Red Rocks in tribute.