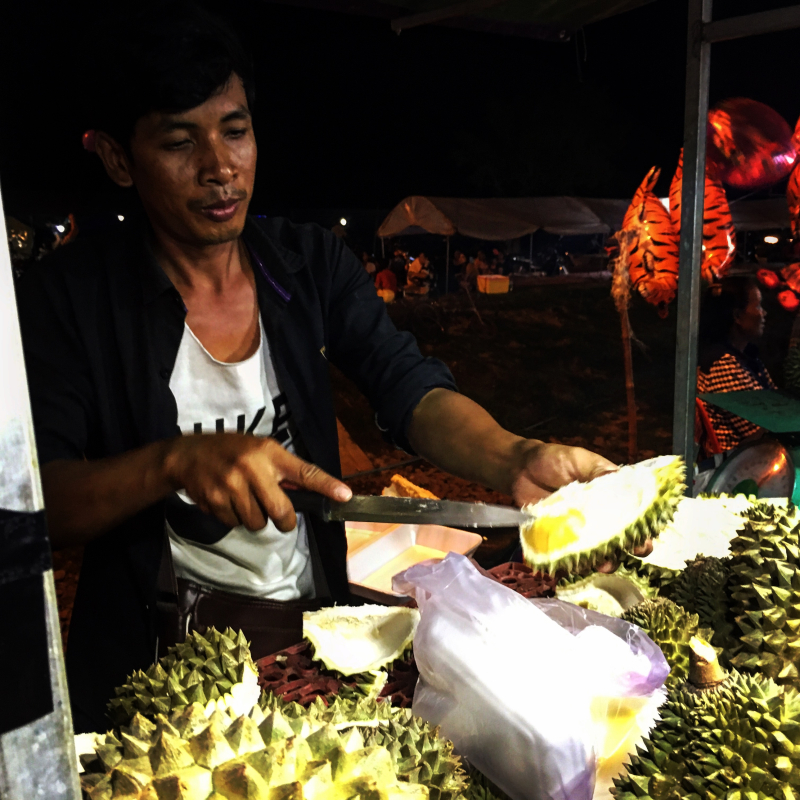 Pretty much from the moment I touched down at Siem Reap I was on the look out for the green spiky almost round musky scented melon. When I saw in the day market on day two of the trip – it killed me to walk by it with just a mere promise that the other group was buying one for that night. But I heard you need to eat durian as soon as it is cut, and I had no idea how to cut it, so I would be dependent on the market people to do it, and then dependent on everyone around me to help me eat it in the moment or else I would be left with a pile of stinking yellow fruit flesh. Shockingly, no one else was as into eating a durian as I was, so I punted, hoping to see durian that night or for another chance in the next 4 days. I did not see durian that night, and this photo above haunted me for the next two days as no other durians were seen. And I found out that durian is not in season in Cambodia, just Thailand to the north. My enthusiasm for the fruit so strange to westerners was amusing to my compatriots. I was almost discouraged, but I would not be diverted from my mission. I was going to try fresh durian. 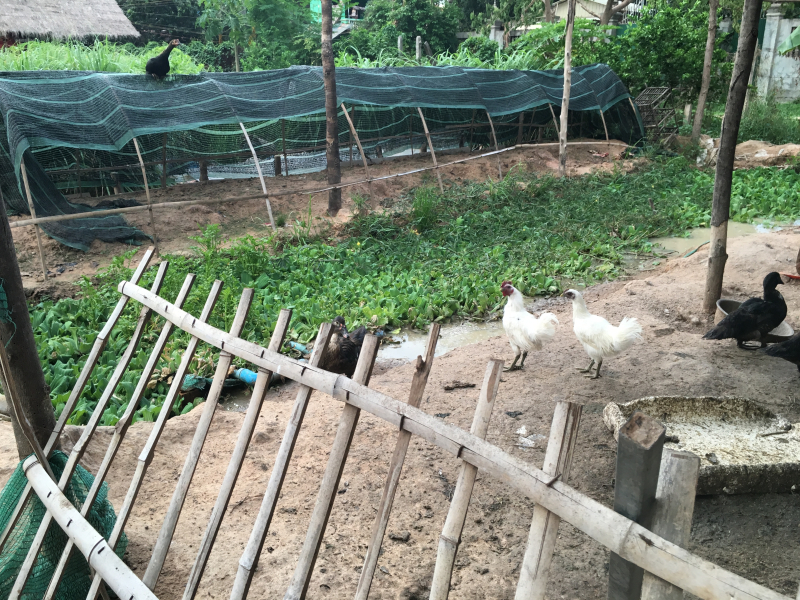 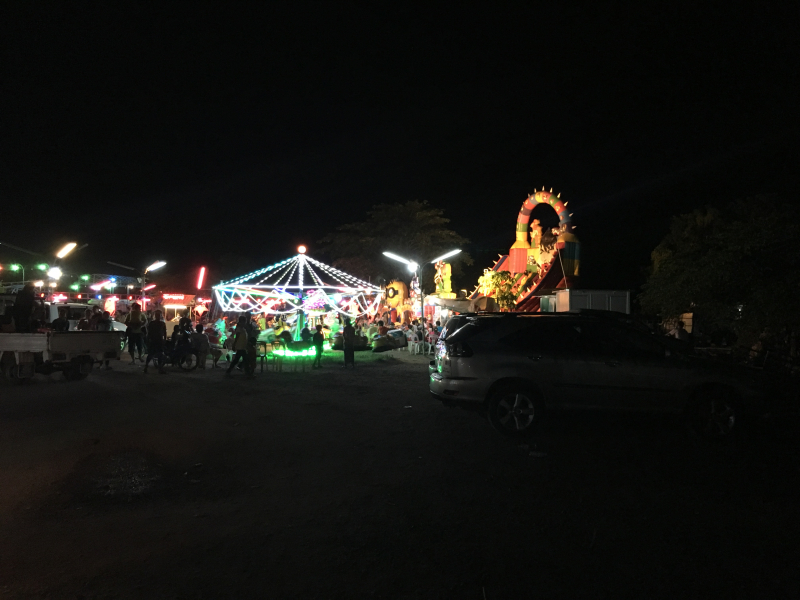 Let's pause for a moment here for those unfamiliar with durian.  Durian is known as the "King of Fruits" and is most well-known for its aroma. An aroma that has caused it to be banned in many public places in Asia that can be described as rotting meat, gym socks, or my favorite – a gaggle of dirty hippies.  It is definitely musky, but in the presence of fresh ones it is not any more unpleasant than being in the presence of a really ripe cantaloupe (in my opinion).

The fruit of the durian is prized, in Asian cultures, and despised in most Western – because, I believe, we of the West never get to eat it fresh – and there is nothing worse than an unfresh musky melon.  Especially when that unfresh musky melon flesh reminds you of not-so-recently cooked pot roast. In general, the consensus is, you will either love it or hate it.  Anthony Bourdain has been quoted as saying it "will make your breath smell of kissing your dead grandmother."

I wanted to decide for myself – but having only eaten a bite of a sad, old, unfresh, hippie potluck leftover durian on a table of other unappetizing cold remains of a party's corpse – I needed fresh to determine truly what this fruit was all about.  So back to the night market. I had a mission but the night market held a whole bunch of other shiny things to see and photograph. 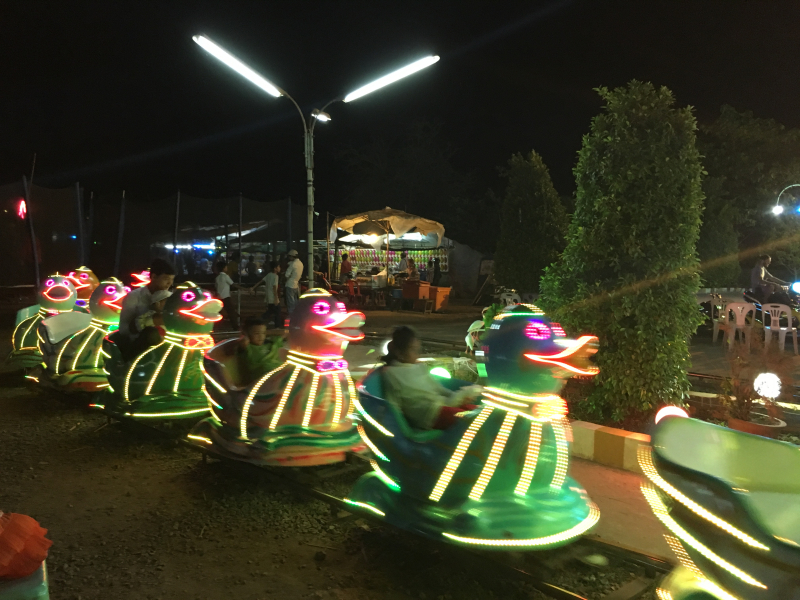 And food, so much food! 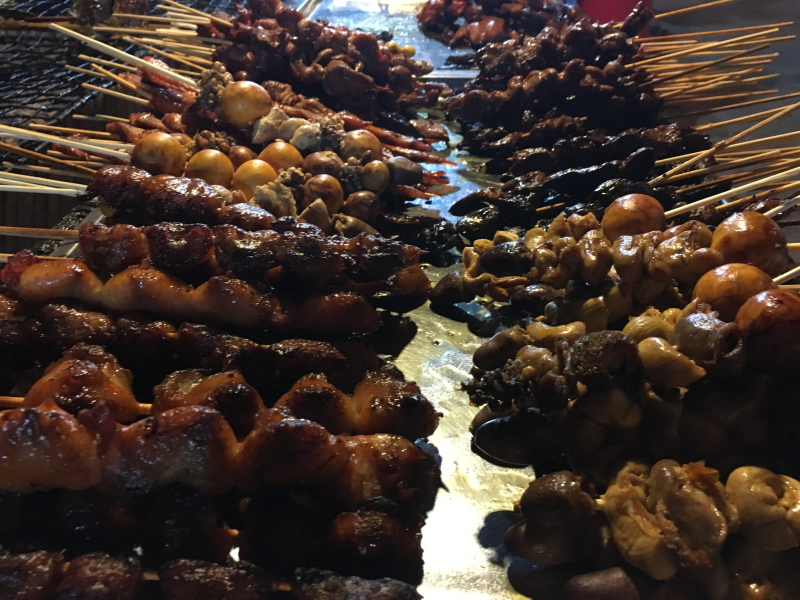 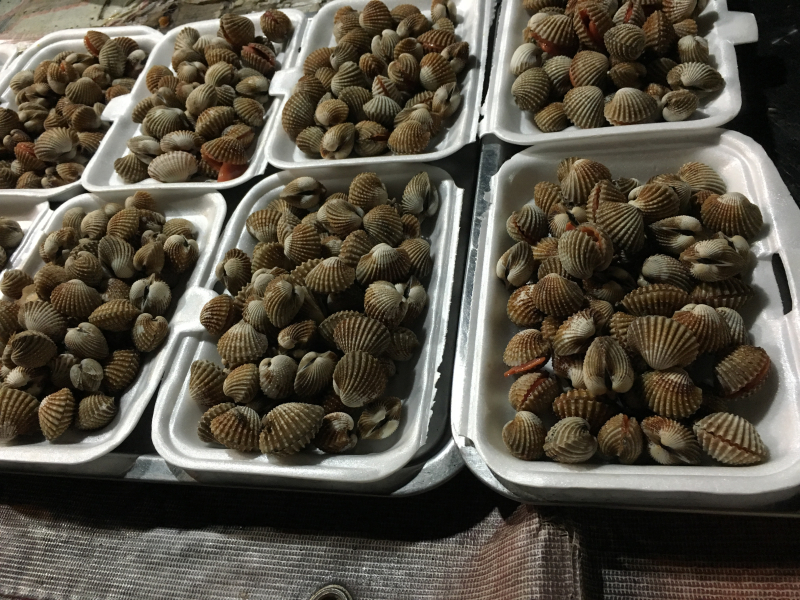 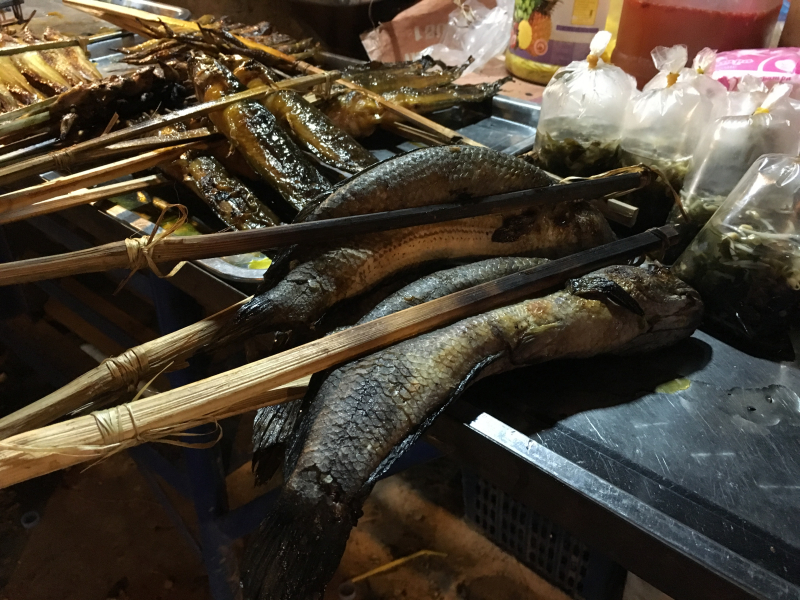 But we were all full of duck soup, and I had my mission. 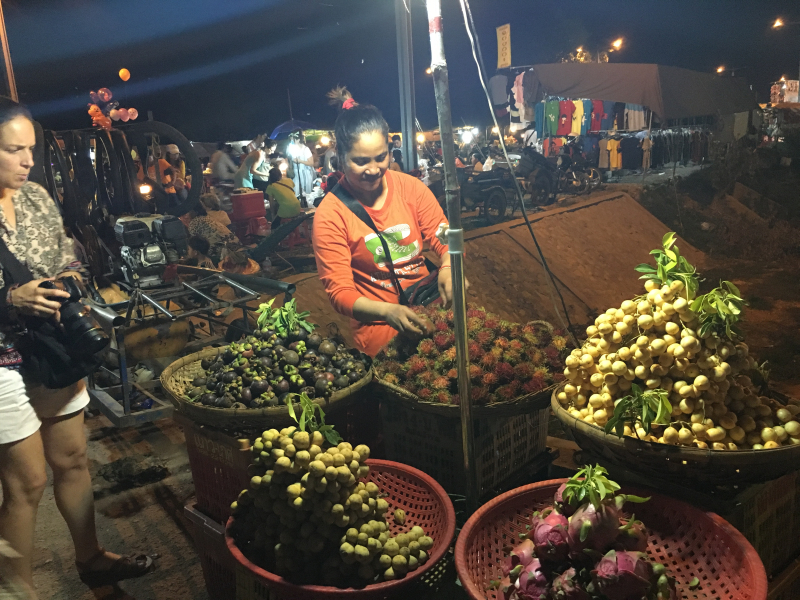 I looked for fruit and found strange things I didn't know the names of, but no durian. 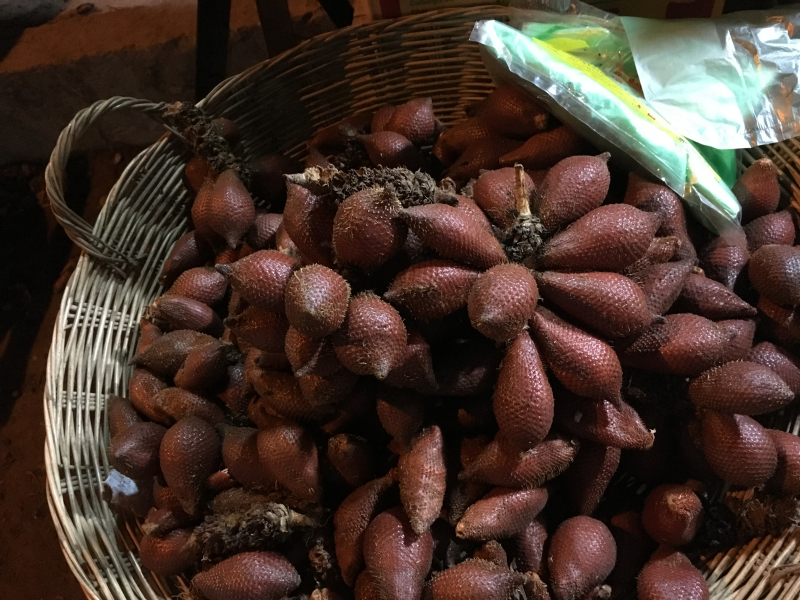 Then I saw it, across the road shining in the night light next to a bundle of balloons proclaiming "I am durian stand, come to me child, come and buy my fruit." I played the complicated game of tourist frogger to cross the market road to get to the durian stand. Once I got there I started my bargaining with the extremely savvy "How much for a durian?" I received a smile of and a hand signal in return, with a broken English response of $3 per kilo.  "Really?" I said, thinking for some reason this was expensive because I couldn't read or convert the posted price in Riels on his cart.  Also, I only had 2 dollar bills or a $10.  I held up my $2 and asked – "can I get a half?" Adamant head shake greeted my question to say "Hell no, crazy lady."  The seller picked up the smallest durian and put it on the scale and said "$4!" I waived my $2 again and said "please?" to which I got no sympathy.  The sellers friend said in perfect clear and direct English, "You do not have enough money." I wanted to roll my eyes because I knew this, I was just trying to make a deal for half a $4 durian. I tried a new approach, "Do you have enough change to break a $10?" They looked at my $10 dollar bill and laughed. I said thank you and walked away defeated that my American dollars had failed me. 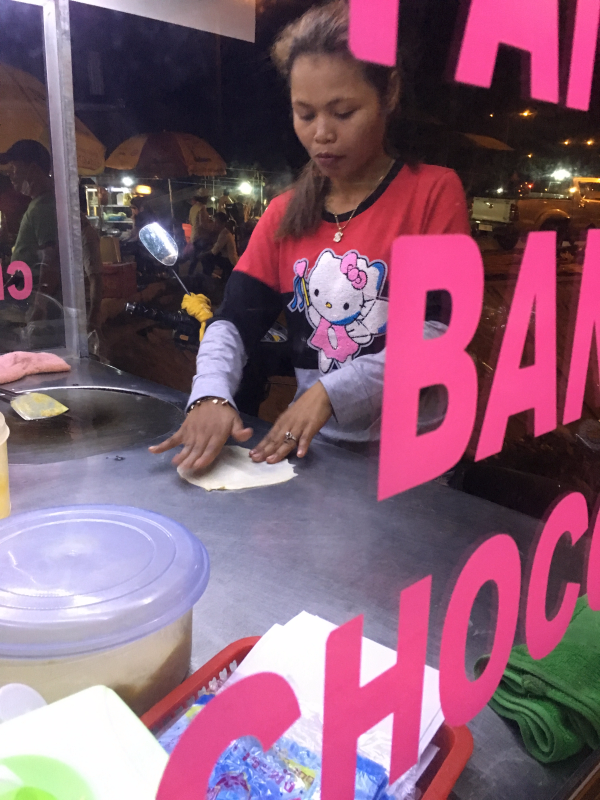 I ran to my friends with my dollar dilemma and found them documenting the making of a Cambodian banana pancake.  The woman was deftly rolling out the dough and applying generous amounts of butter as the disc grew. Then bananas were added, and more butter. Eventually this little rolled up treat emerged hot and burning with butter. 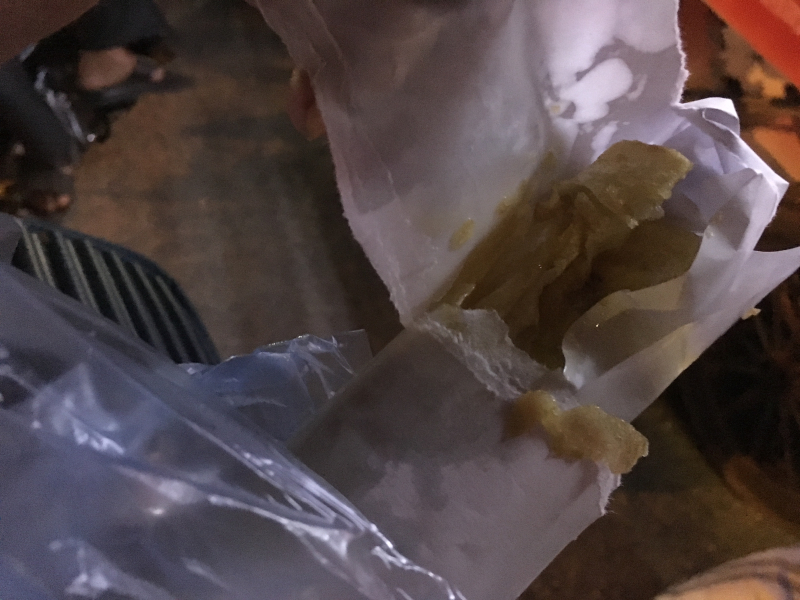 As we were eating the banana pancake I asked "Does anyone have change for a $10? I really, really need to buy a durian." In response I received "You know the hotel won't let you bring that in there don't you?" and "Why do you want a durian so bad?" Then, there was one voice who simply said "Here is a $5. Buy me a drink at the hotel later." I danced across the street to meet my spiky green fate. 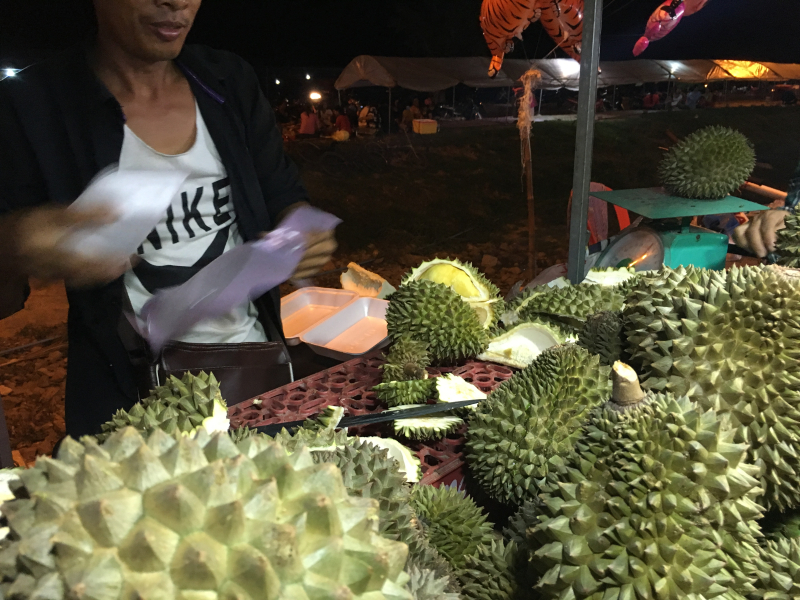 When I got to the stand I waved my $5 dollar bill and said "I have the right money now. Can I have my durian?" Initially, I was ignored, like the seller was pretending like he didn't know me and all the memories we had together.  His direct, perfect English speaking friend was gone. I waited until he finished filling three shopping bags with boxes of during fruit harvested from the spiked green fruits and handed them off to tiny looking woman with two children. His labor complete he looked me in the eye, took my $5 bill and began to hack into my small durian. Then he meticulously extracted the golden yellow fruits and put them in a white plastic bag and handed them to me.

I ran back to the group who was waiting for me at the tuk-tuk – so ready to leave.  I had my durian, I was complete.  I jumped into the tuk-tuk and immediately dived into the bag to extract a piece of fruit to put in my mouth. It was the texture of pudding and it tasted like vanilla, almonds, and something unidentifiable but savory.  It did not taste like meat, but it definitely had an odor, a strong odor that I could only imagine turning rank once the fruit was no longer fresh. It was durian in my mouth as the late night breeze of Siem Reap blew through my hair on the back of a tuk-tuk. Life is good.