On my last day of Crafting Culinary Stories workshop I set out with my very own tuk-tuk and driver to see the making of prahok. Prahok is the traditional fermented fish paste prevalent in a lot of Cambodian cuisine. I wanted to see this traditional Cambodian fermentation process thinking I could somehow create a parallel between this process and the changes happening in my life on the homefront and write a personal essay. 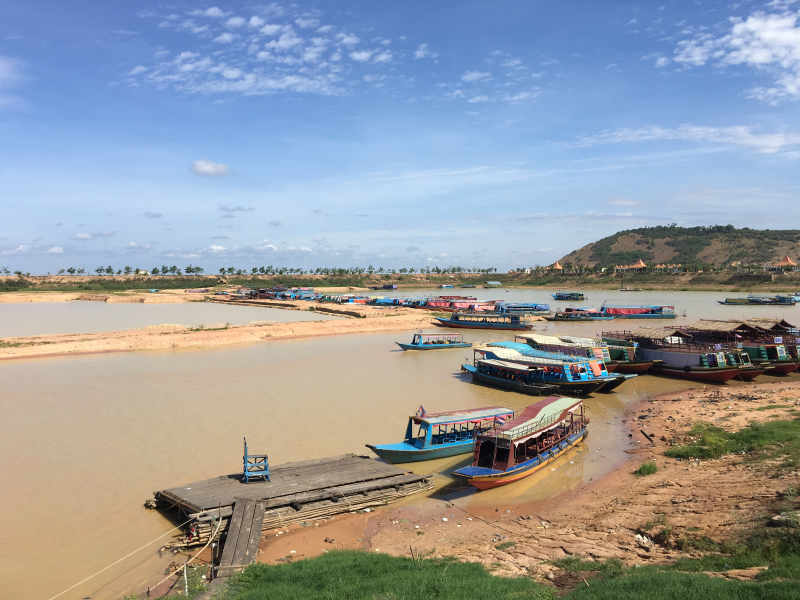 As luck would have it, however, when we got to the house where they make prahok there was no process of making prahok to be seen. 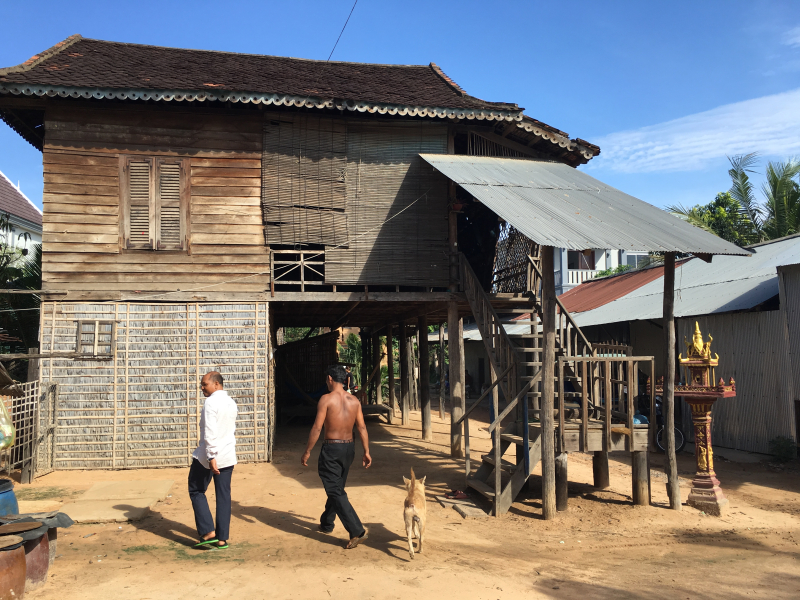 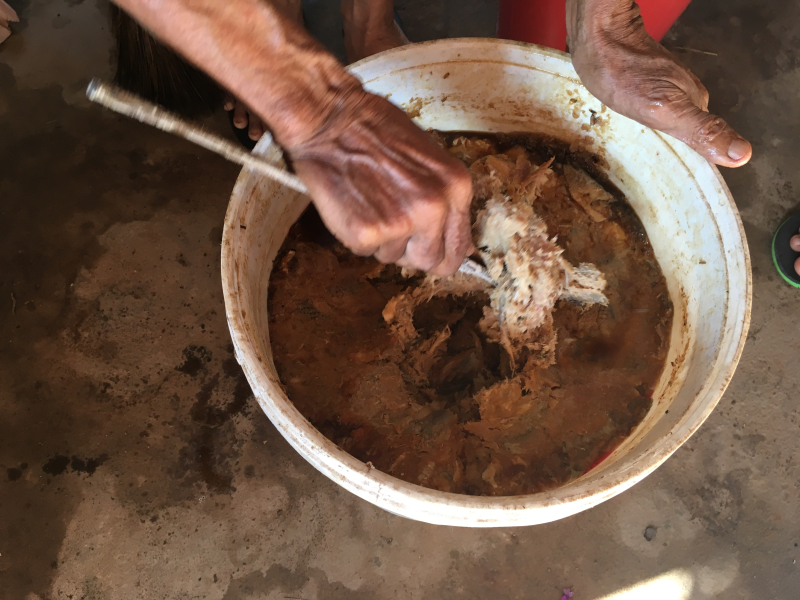 November is prime time for the fishing and thus the processing of the fish that is turned into prahok.  So I was about five months early or seven months late, depending on how you look at it. 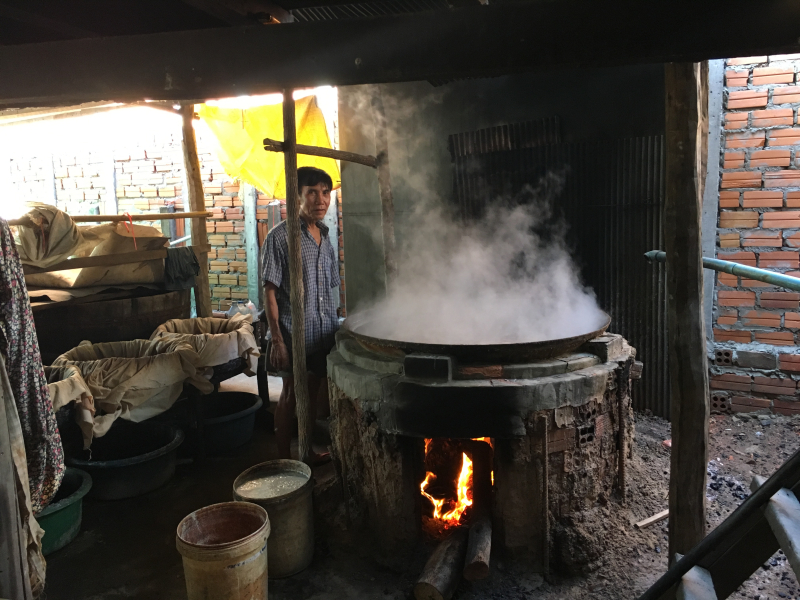 The people I met were quite busy continuing to process the fish sauce that is a by-product of the prahok process.  Their cauldron was bubbling – as the smell of the fermented fish pervaded the entire dwelling. 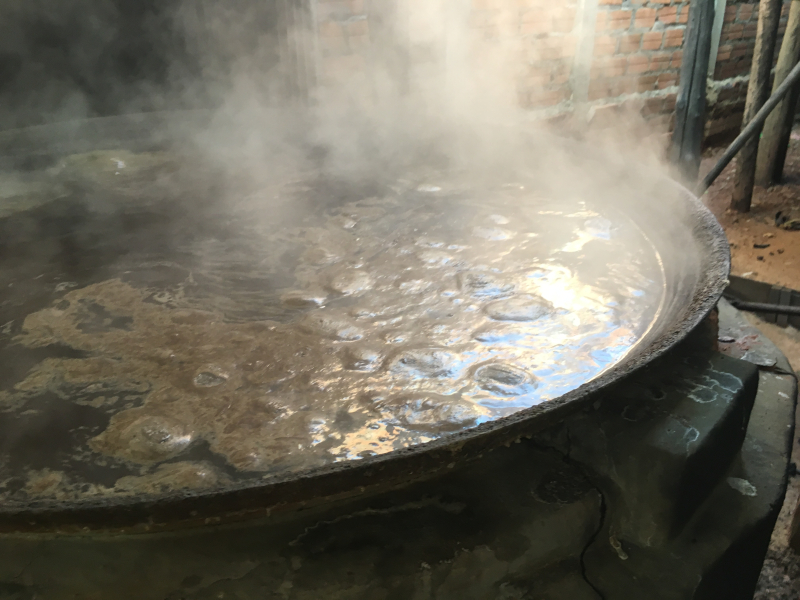 The smell of prahok is somewhere between the sour smell of a long time unwashed human and particularly acrid compost. It is, shockingly, not horrible though, because it is not the smell of rotten (and rotten fish being some of the worst smelling rotten) it is the smell of ferment, preserved with salt. 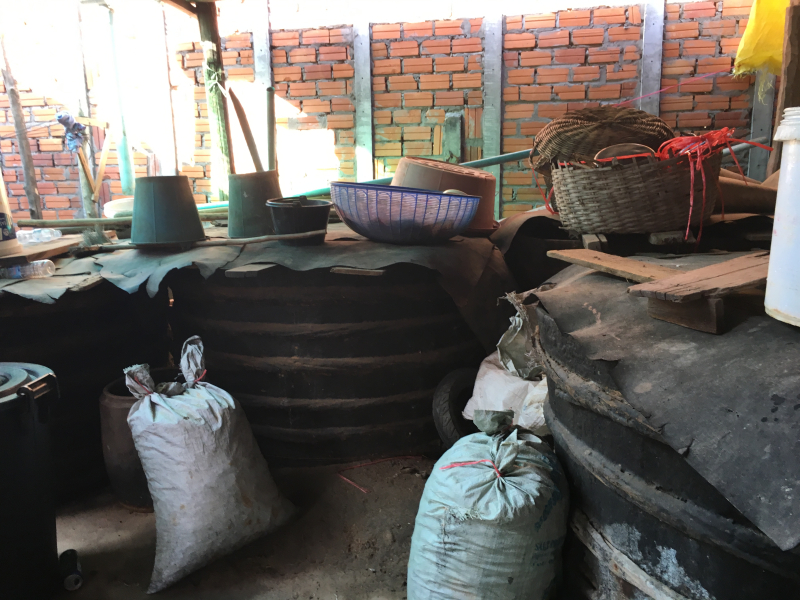 If there were prahok to be found it would have been fermenting in these giant barrels under the family's house.  But there wasn't any prahok in the works besides a few small buckets saved for the family's food supply and small market  sales throughout the summer. After a successful season this family sold over 5000 kilos at $3-5 a kilo of prahok – an amount they must make work until next season when they need to buy the fish to start the process all over again. In the meantime, they have baby crocodiles. 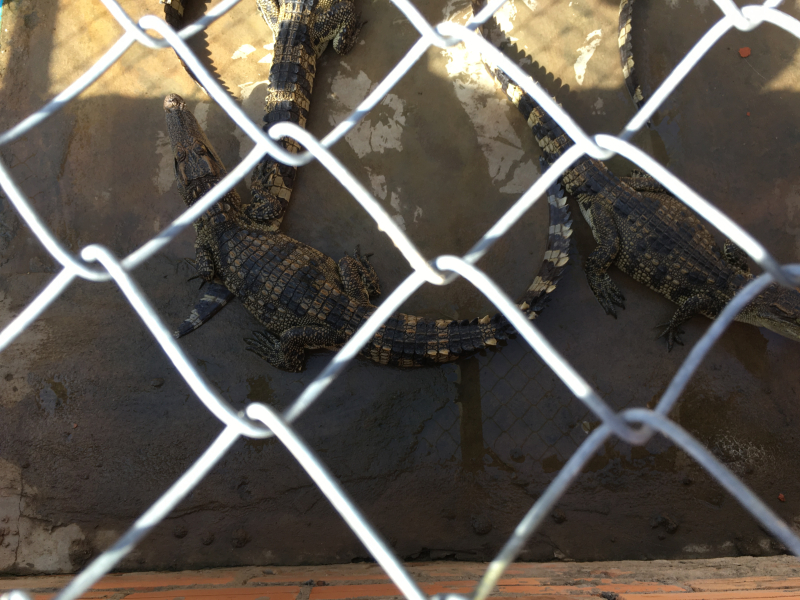 Making the best out of the surprise no prahok production in process, my driver suggested that we go see “the lake” where people “lay.”  I said sure, why not, let’s go look. I thought he meant “beach” but as we drove and we started passing hammock bars in large houses on stilts I realized that there would be no beach. 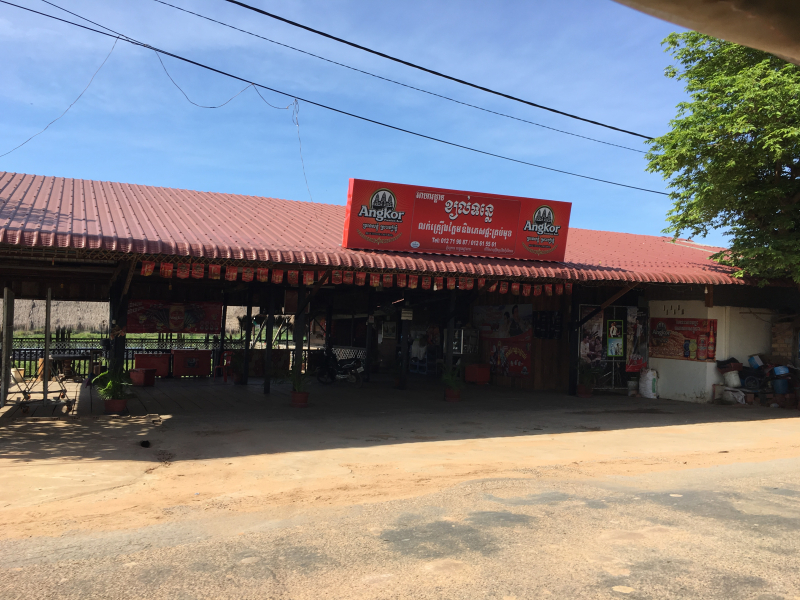 In fact, there probably wouldn’t really be a lake because all I could see was rice and lotus farms. 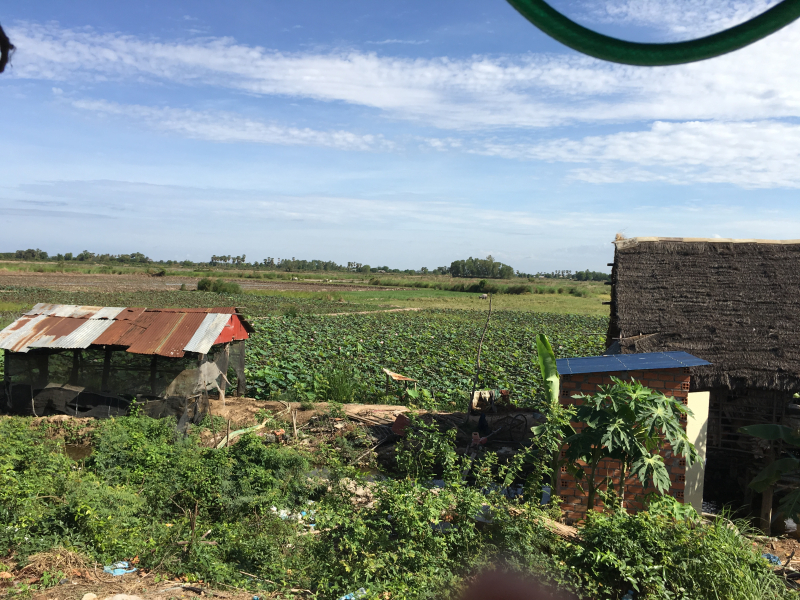 Just to confirm my suspicion I asked, “There are a lot of hammock bars around here, is this place usually the lake?” My driver, emphatically said “Yes! The water is usually up to here.” He pointed to above the tree line and just below the decks of the stilted homes. 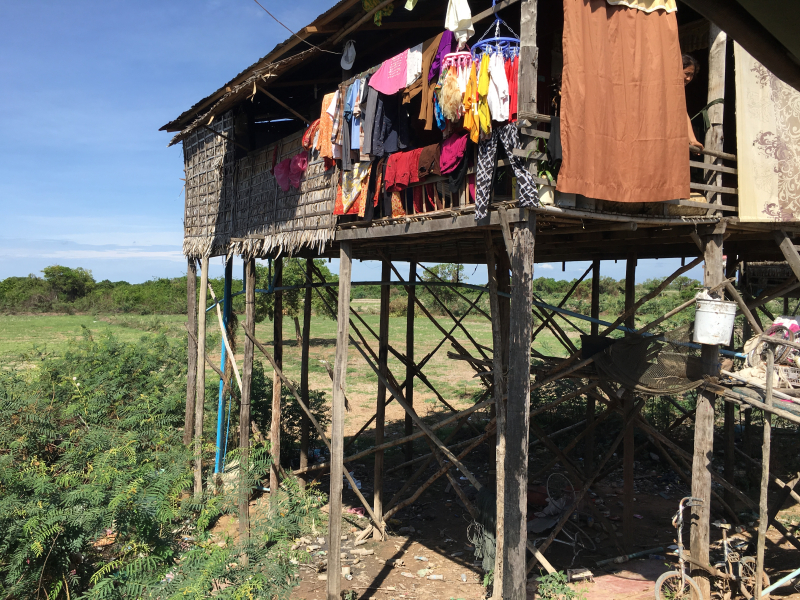 As we went farther I began to see houses that were not along the road but were far out and on even taller stilts.  “When there is water, do they need to take a boat to get to their houses?”  I asked.  “Yes, yes – see all the boats?  They do not use motorbike, just use boat in the rainy season. Want to go see?  We’ll go to the lake first then I’ll show you.” “Sure, sure if it is safe.” I said.  Then we drove up to this mud puddle with construction all around it – there was a cluster of rainbow colored boats parked by what resembled a shore. 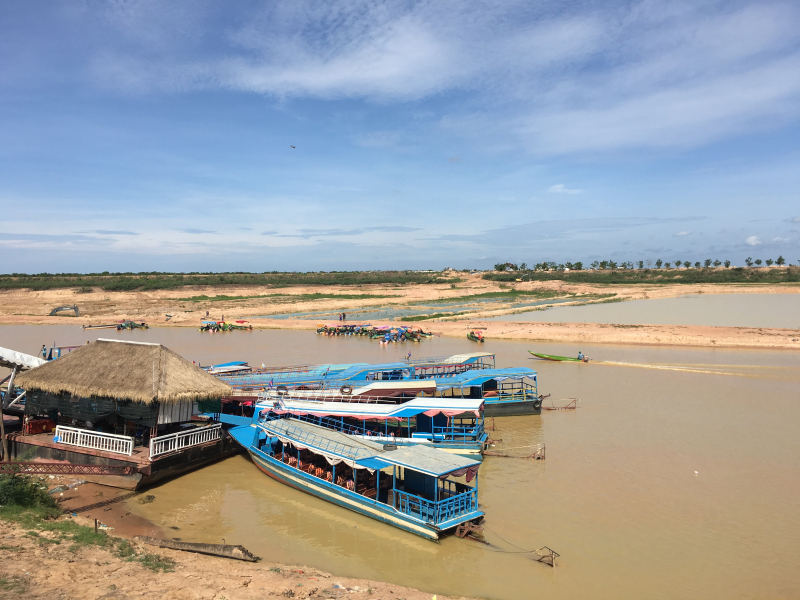 “Tourists take the boats to the floating city and market.” my driver pointed out.  “I’m sorry,” he said “it is much prettier to look at when there is water, and a nice fresh breeze.”  He leaned against the pole on the dock/boarding structure we were standing on and took in a deep breath like he was taking in an October breeze from the fresh water ocean this area would be if covered in rain water. His face lit up like a toddler handed their very own ice cream cone. He popped out of his reverie.  “Ok, let’s go see the houses.”  He said and we loaded onto the tuk-tuk and headed for the narrow road to the lake houses.  Once we were on it, it was really obvious that it was quite narrow, too narrow really for a tuk-tuk and extremely bumpy. 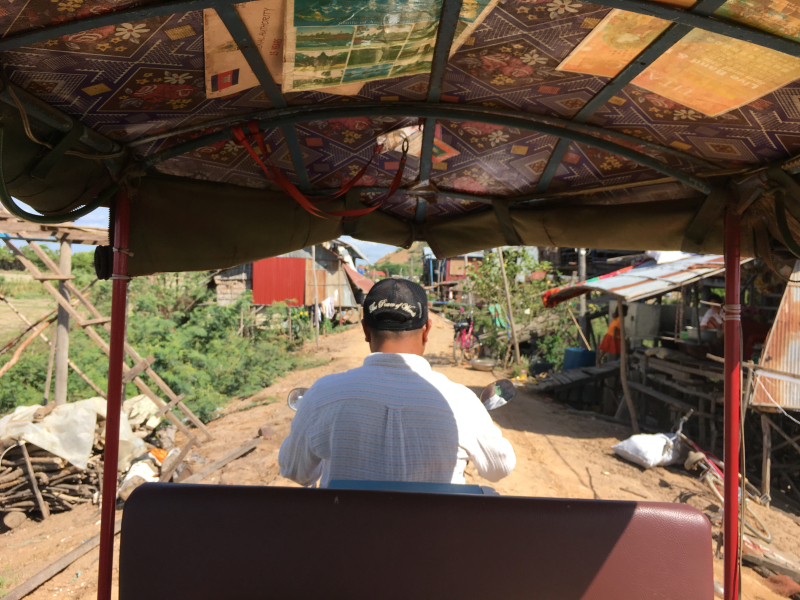 Also, I was the only white lady to be down this road recently, or ever.  I smiled and waved like the movie star I became driving by the houses of the fishing village people. 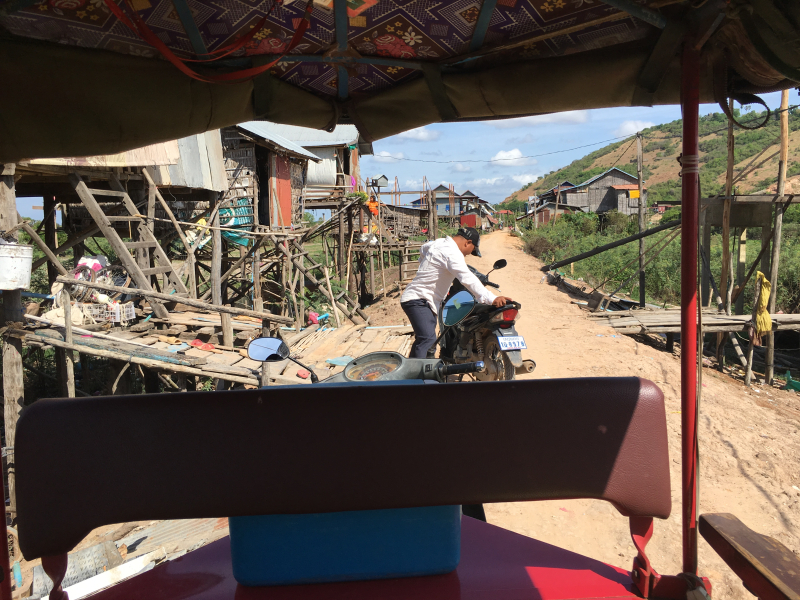 We bounced along, stopping here and there to remove obstacles from the narrow road until we came to a spot where there was open space and some goats resting.  I asked for us to come to a stop so I could take a few pictures now that we didn’t have an audience. I saw a large patch of mud in front of us and suggested that I walk so the tuk-tuk did not get stuck.  My driver reluctantly agreed when he saw the scene ahead of us.  I said “In the US we call the “off-roading” I’m totally used to walking through stuff like this.”

He took the tuk-tuk through the mud and got almost all the way up the hill on the other side when he got stuck.  I caught up on foot as he was debating what to do about our situation.  I said, “I'll help push to get us up the hill. It’s OK I’ve totally done things like this before.”  I lied but I’m sure I’d done something equivalent somewhere along the line. 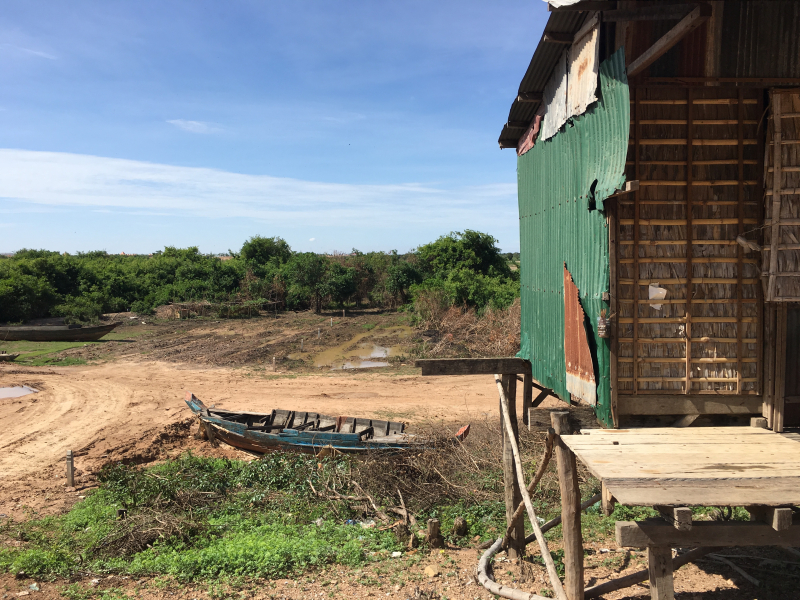 With teamwork we successfully got the tuk-tuk up the hill an onto a wider road way more appropriate for me to be paraded down.   We stopped for a minute so I could take more pictures, because luckily no one had witnessed our little trial. After a little more driving we stopped in front of a house with fishing nets to look at the tools that collect the fish that make up lower grade prahok. 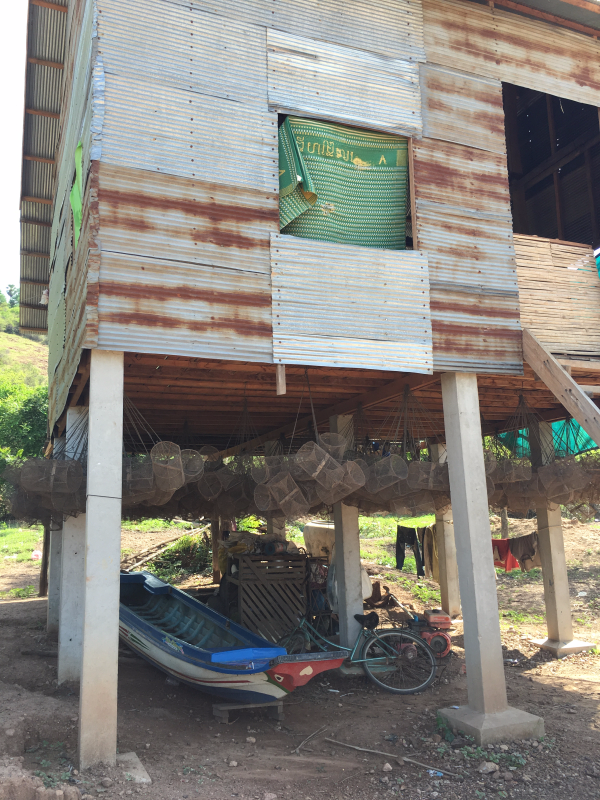 The houses around us were modest to tiny, many just made out of bamboo and thatched roofs. 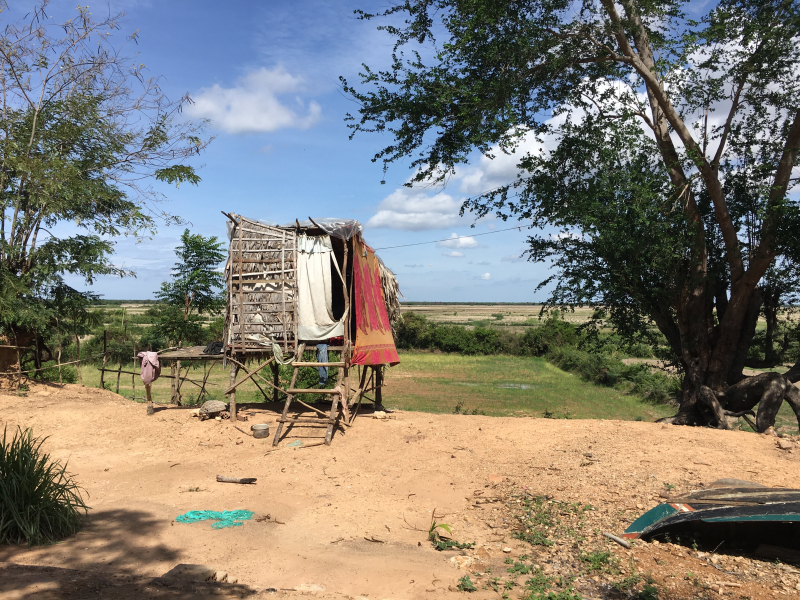 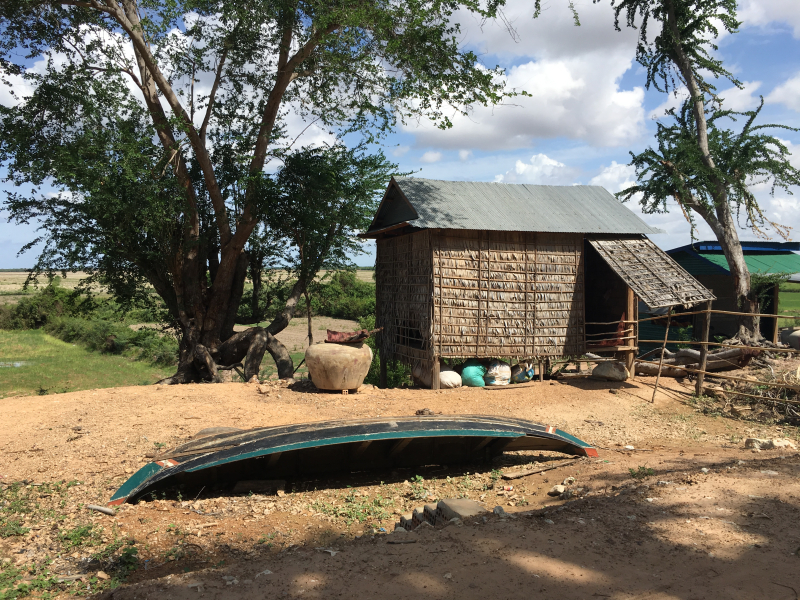 The children who saw me waved and said “hello” or just stared with big eyes. 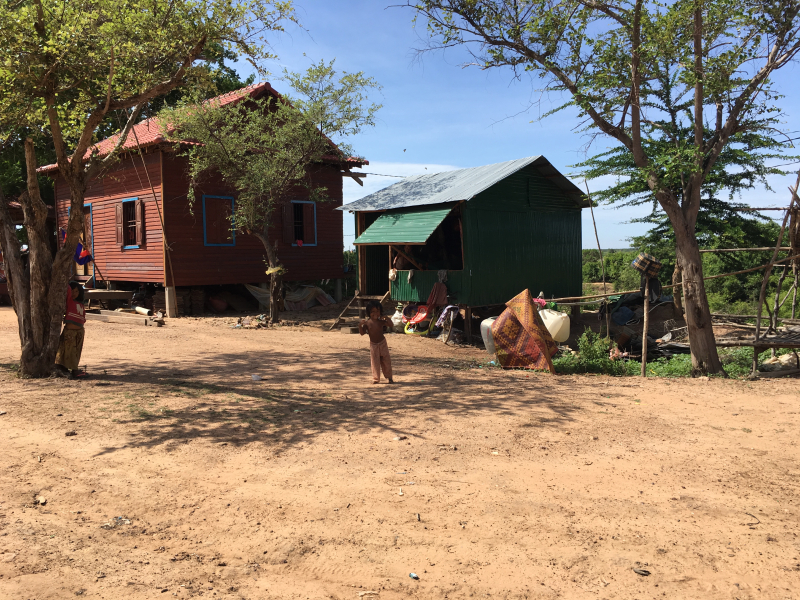 We eventually made our way back to paved streets and houses larger than one room.  We stopped briefly at a pagoda to view the paintings of the Ceremony in the Air and Buddha under the Bodhi tree when we were chased by a tiny mob of 6 to 8 year olds asking me for one dollar. 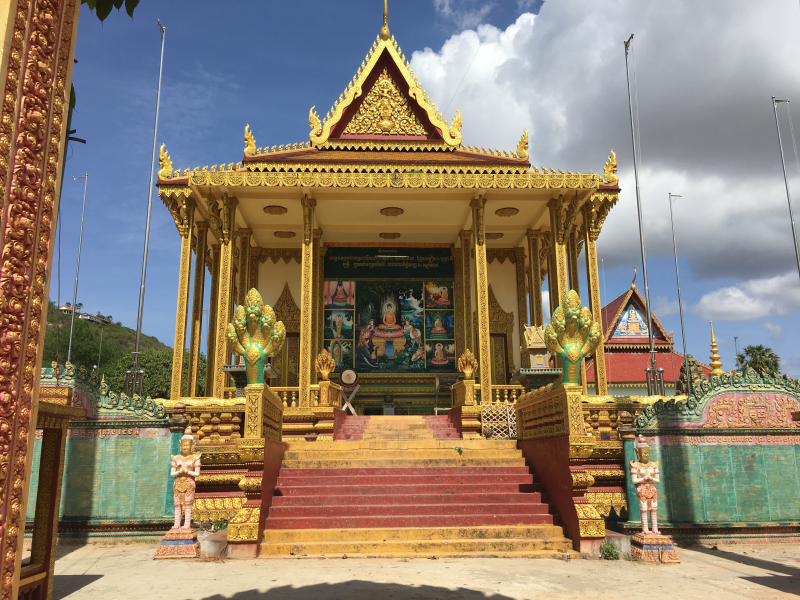 After the child mob we went to the local market where there was a whole section of fish sellers.  My driver happily pointed out the locally made prahak, and other delicacies. 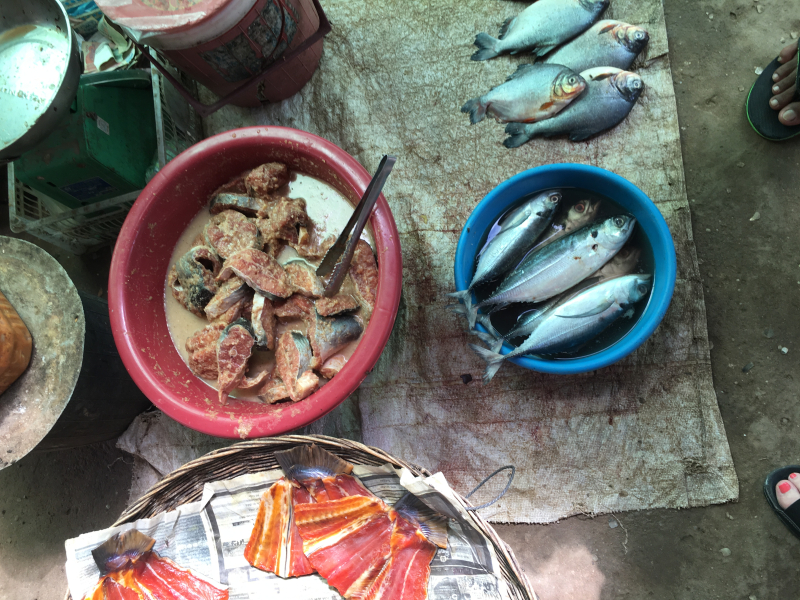 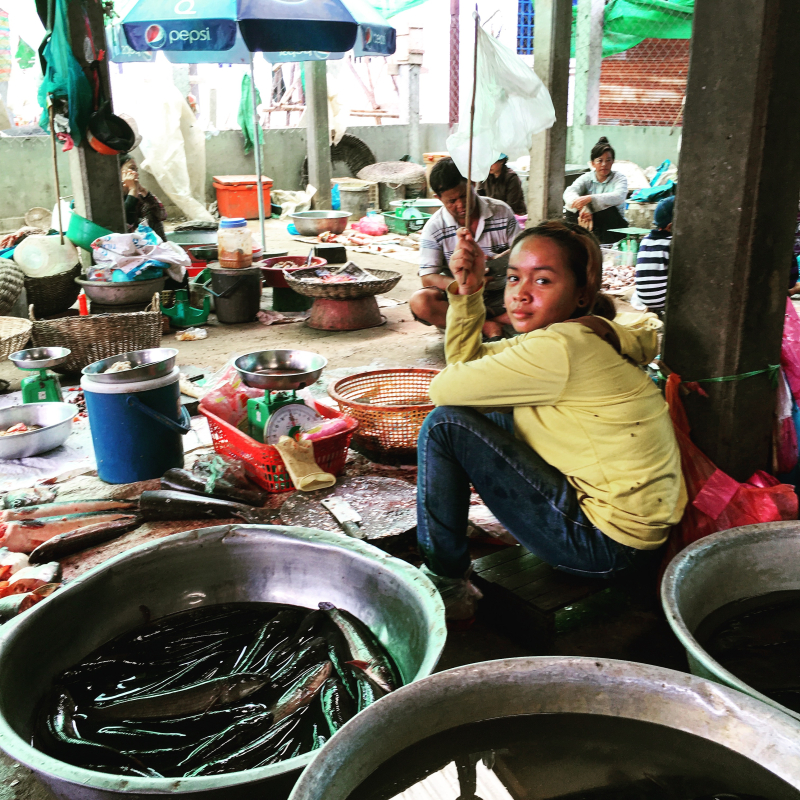 “Would you like to see more?”  He asked me.  I looked at the time, it was almost 11 am – we had been out in the rural wilderness for about two hours already. 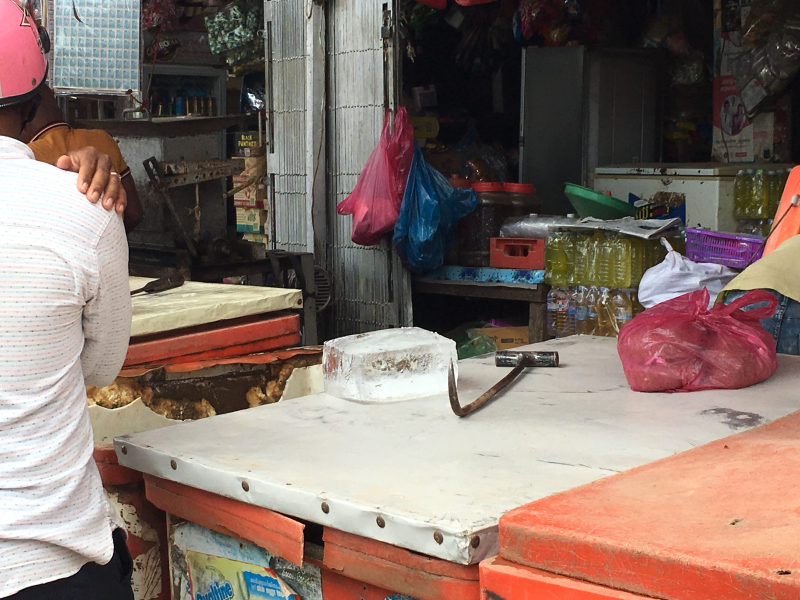 “No thank you, I have to go home and write about this.” He cocked his head sideways as if I had just said the most strange thing then said OK and we headed back taking a long road of red dust across a giant wasteland of rice patties and one temple. 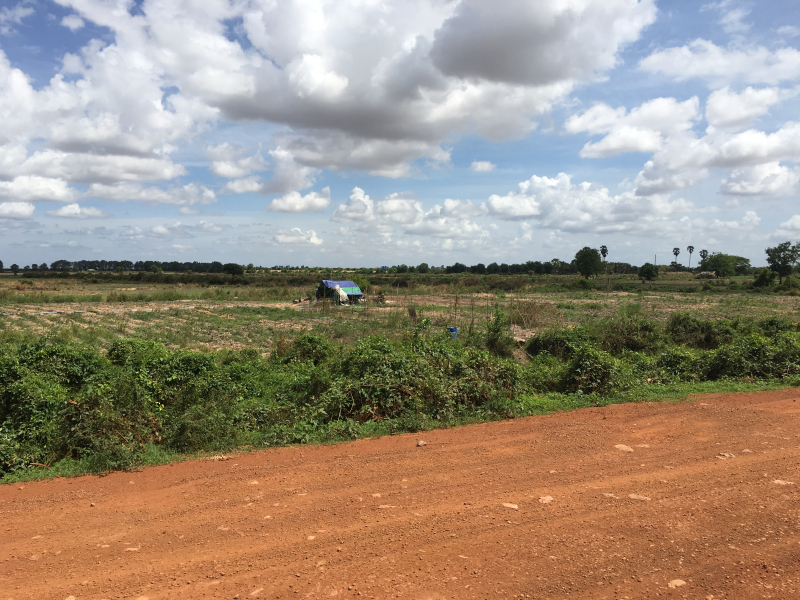 We waived at the temple authorities as we passed.