One of the many benefits I experienced from my trip to Cambodia this year was meeting making connections with woman writers. One of them happened to be living in Austin, and was planning on attending Blogher Food. Maggie was the last person I saw in Cambodia (as we traveled to the airport together) and the only other person living in the United States that went on the trip (who was not an instructor).  When I emailed her my dates for attending Blogher Food 2016 she responded immediately that it would be great to get together – but as fate would have it she was traveling to Beijing with her husband starting that Friday and was going to miss the conference. I was going to be forced to network and make new friends. 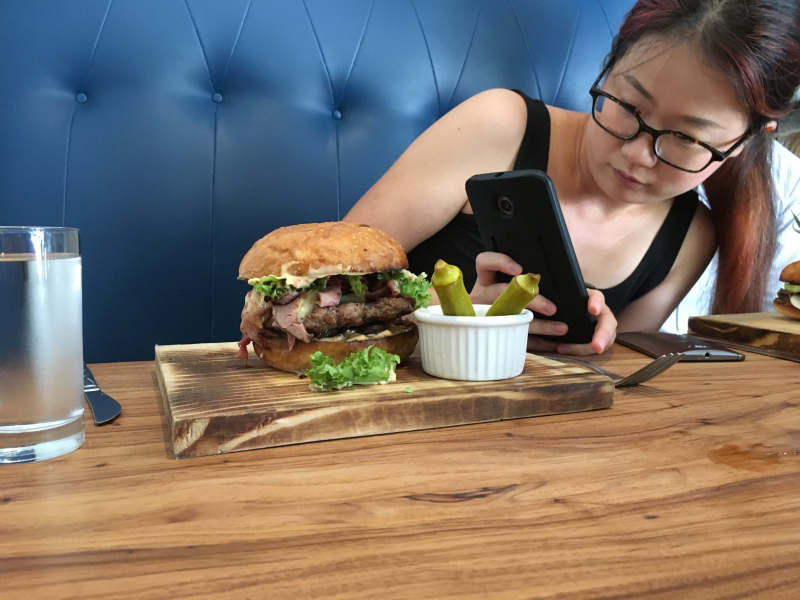 Luckily, she wasn't going to miss seeing me, at least for part of the day on Thursday.  I texted her when I woke up and got my bearings at my unique and interesting accommodations – she made plans to pick me up for lunch at 12:30pm at my Airbnb's front door by the Once Bitten boutique sign. 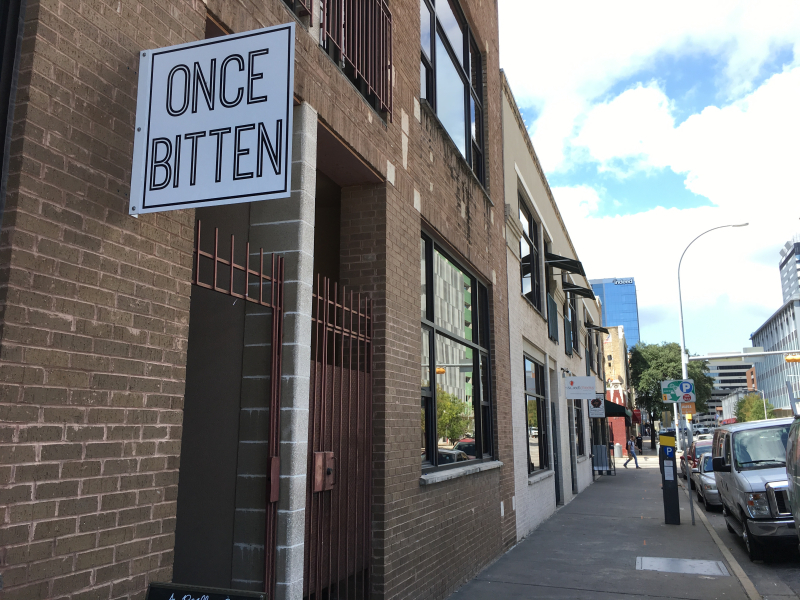 We chose Dai Due for lunch – because they served lunch and it was on the top of both our places to try lists. 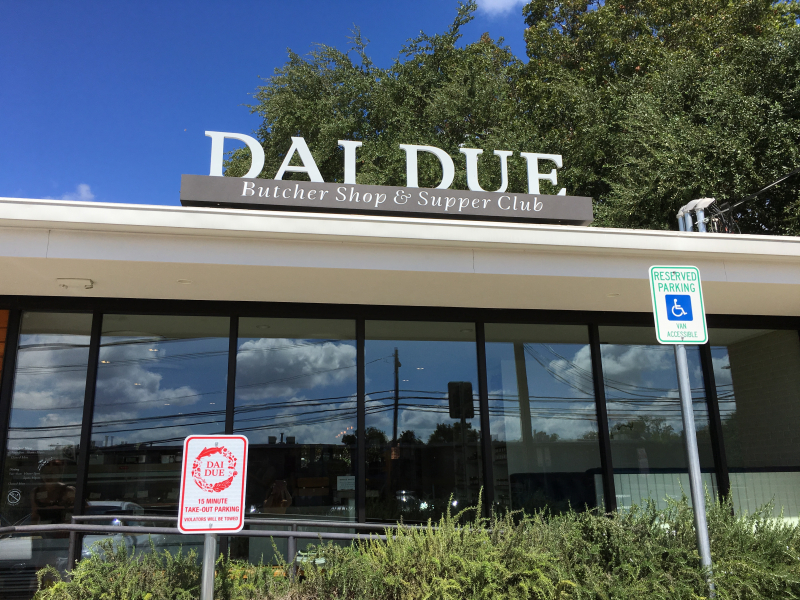 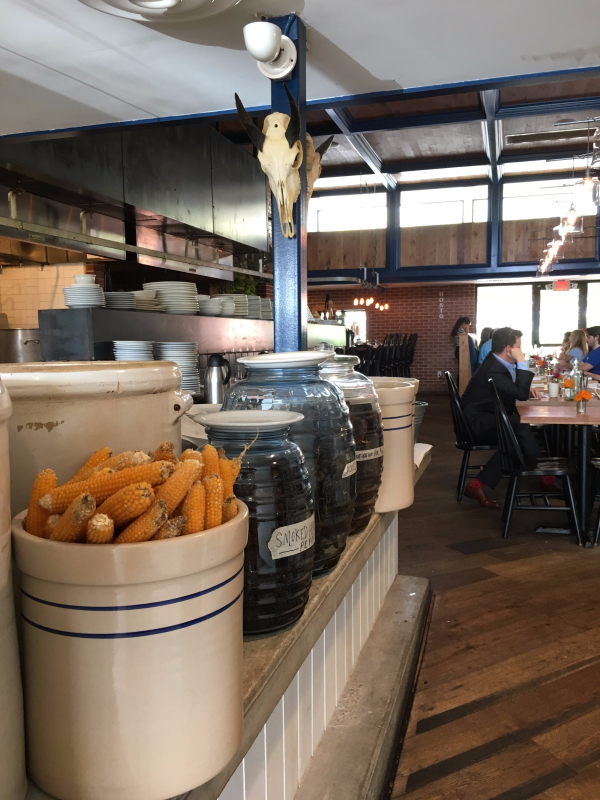 Dai Due is a local food focused, nose-to-tail butcher shop restaurant that pickles all of its own things.  When you walk in the front door you are greeted by meat case of joyful charcuterie and other wonders of the smokey variety that drift and waft up your nose. 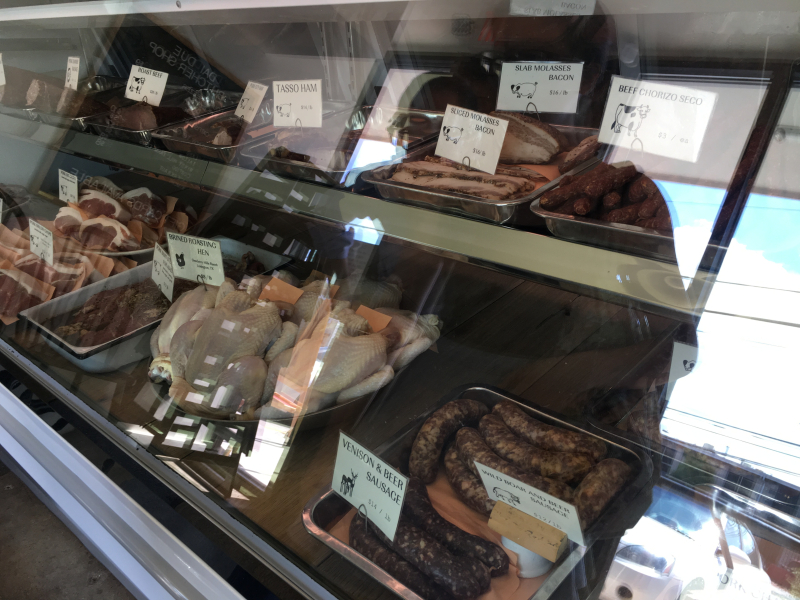 It is not really a place for vegetarians. Although there were a few pickled vegetables on the menu, along with tallow coffee. 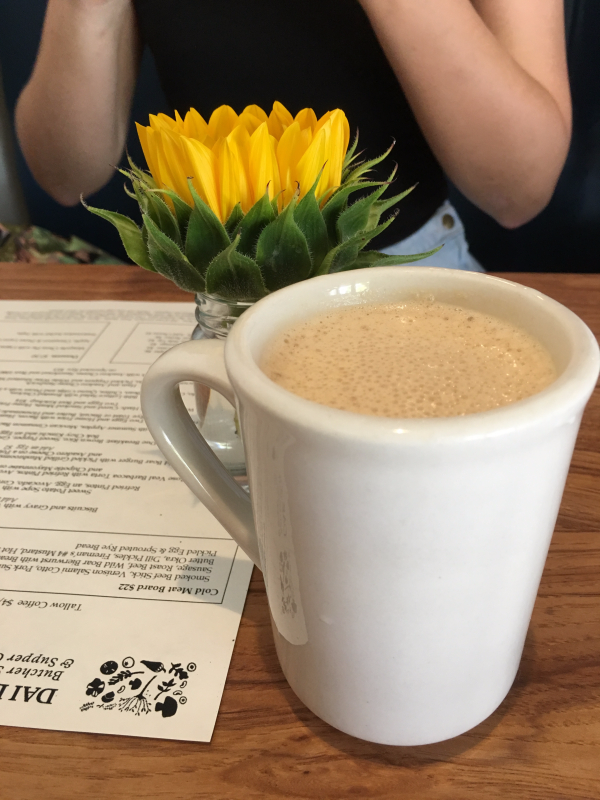 After some research we decided what to order. 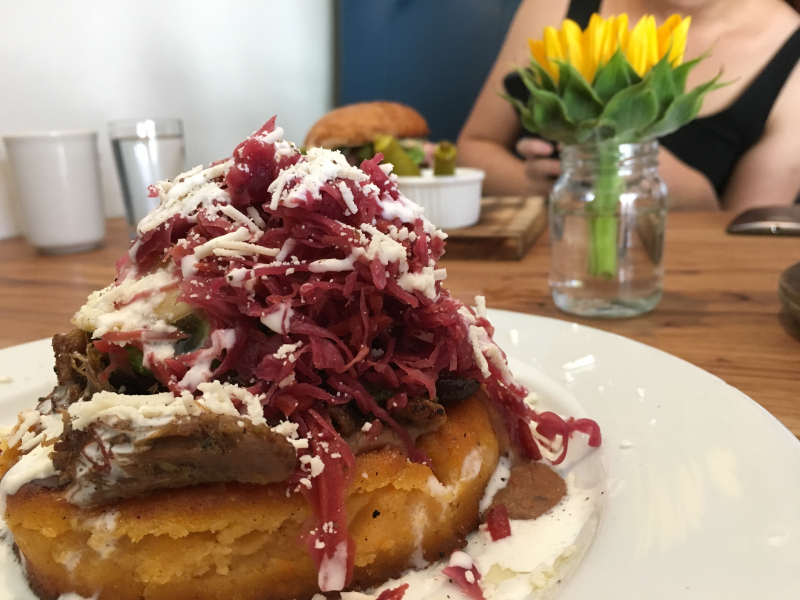 I ordered the sweet potato sope with wild boar deshebrada and 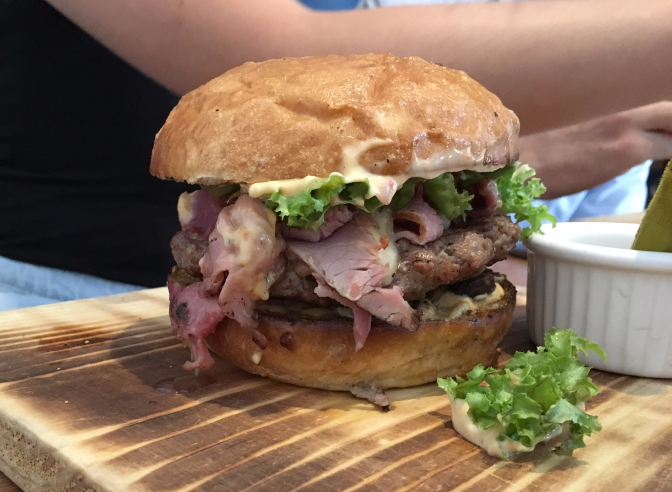 Maggie ordered the wild boar burger that came with an additional meat on top that was not mentioned on the menu. All of the above had a certain heat to them.  It could possibly be because of these peppers. It was all rich and meaty delicious. The flavor of the boar was salty fatty savory resting like a heavy pillow of umami on the tongue before immediately filling my stomach after five bites. 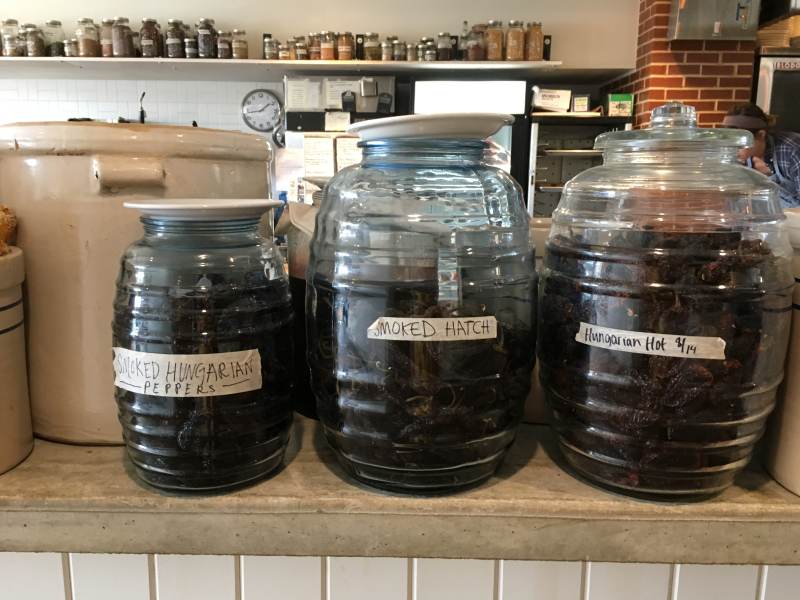 Maggie ate her entire burger – I was impressed.  I was not even able to accomplish half despite the enjoyment of the flavor combinations at work with the cheese, pickled onions, avocado, sweet potato and pork. Granted I had a beef rib for breakfast. 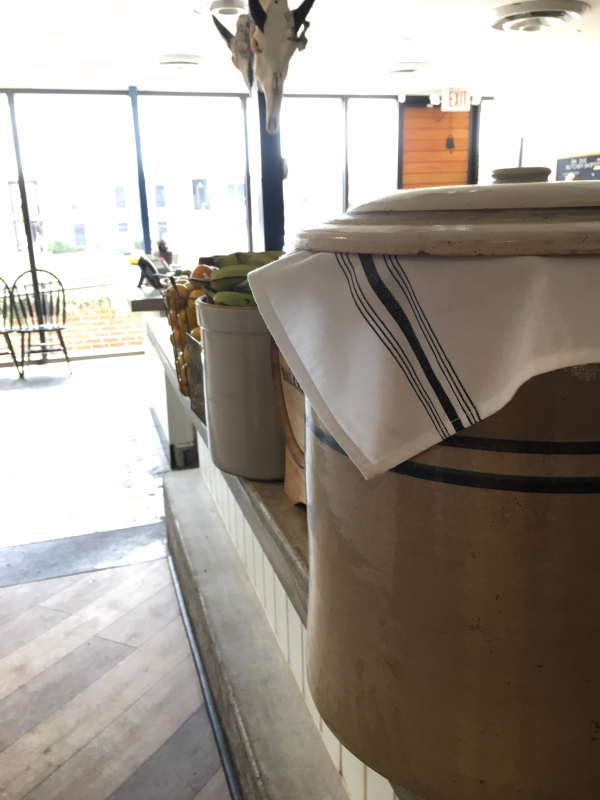 After lunch Maggie's husband dropped us off at the University of Texas Austin Museum of Modern Art. She had never went and always wanted to and I was super game  - but the majority of the museum was closed, because of changing art installations. But all was not a loss – there was an exhibit of completely illegible writing by a Chinese artist. 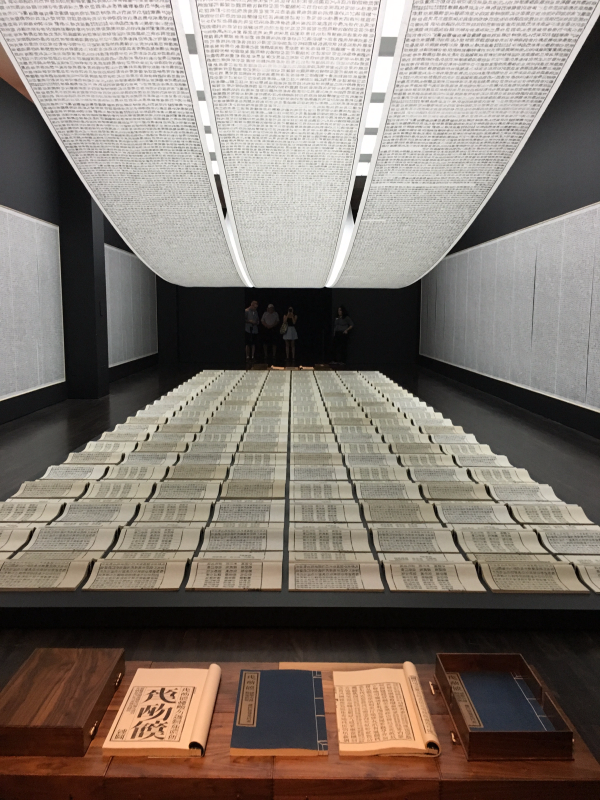 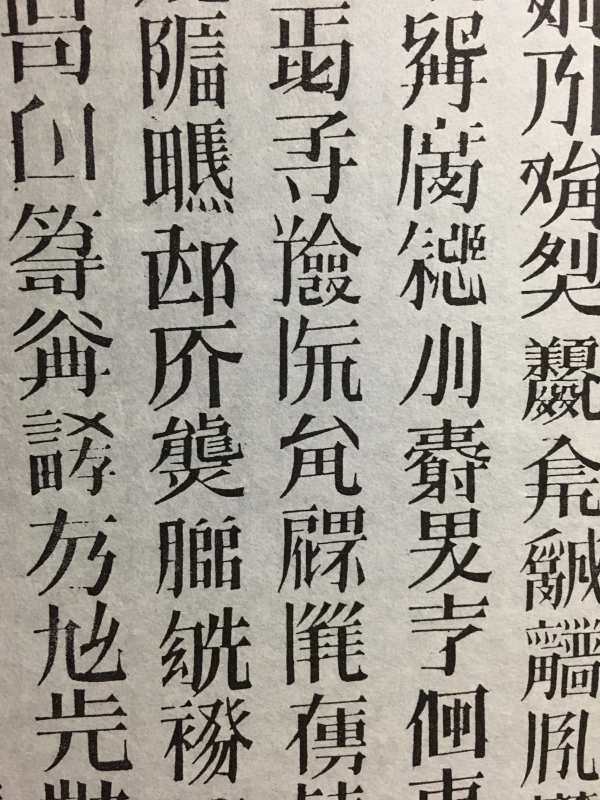 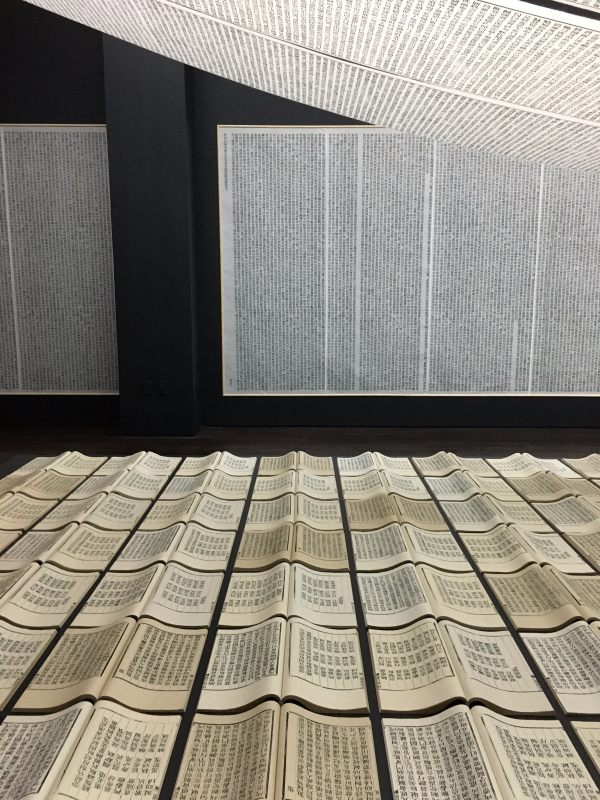 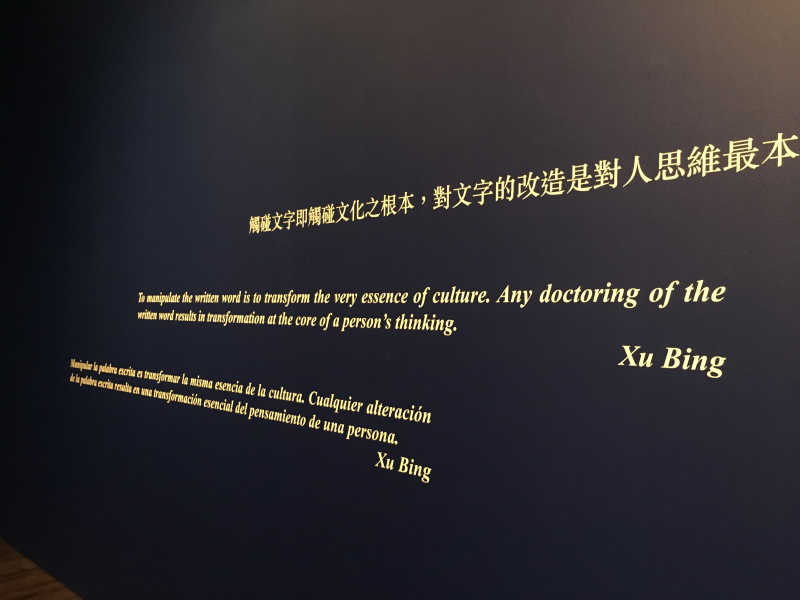 It was illegible because he took Chinese characters and manipulated them to be slightly-off so they lost their traditional meanings and you could only ingest them visually. From the art museum we walked to small artisan cookware and crockery shop Maggie loves. It was hot so we walked slow and stopped in multiple air conditioned places for a break along the way. 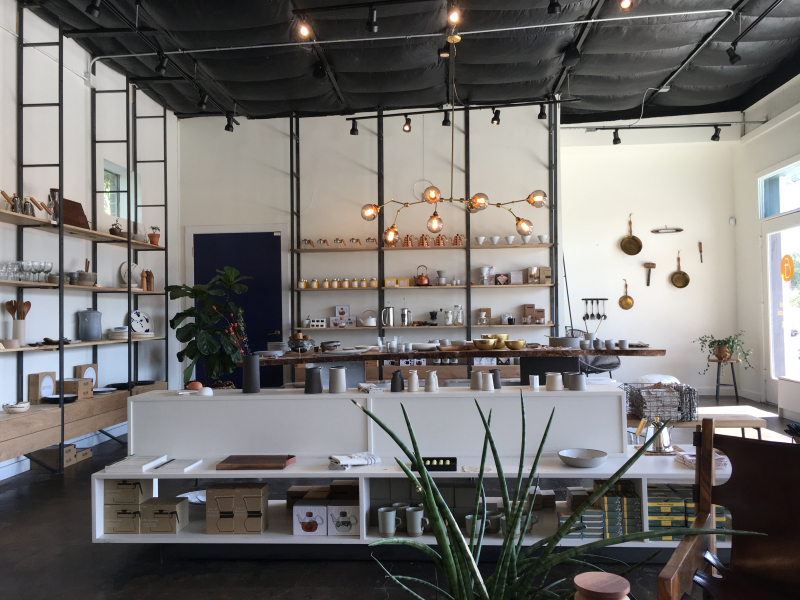 The shop was filled with beautiful things.  All things I could live without but would be very nice to have, except this one thing. 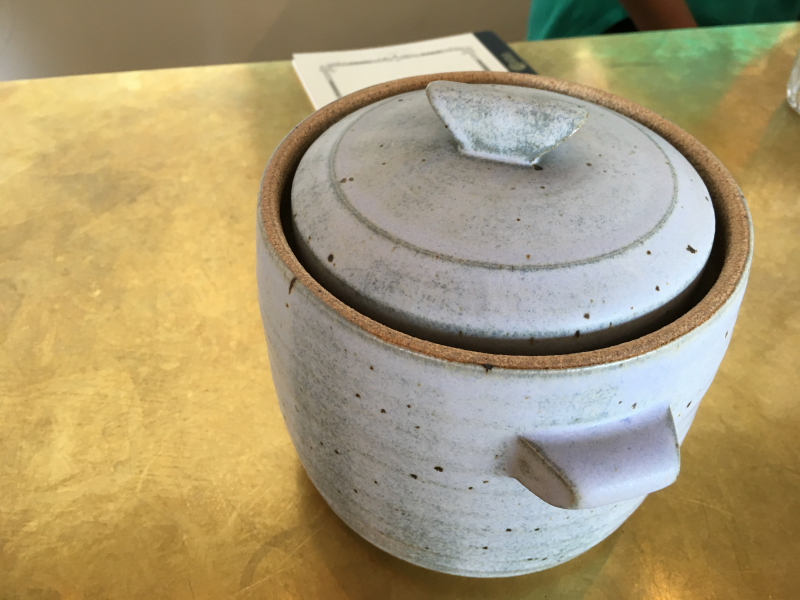 A tiny little custom designed fermentation crock, with weights and lid.  This little number is the Corvette of fermentation in small batches – and it is being shipped to me in Seattle for much future joy and fermentation experimentation. 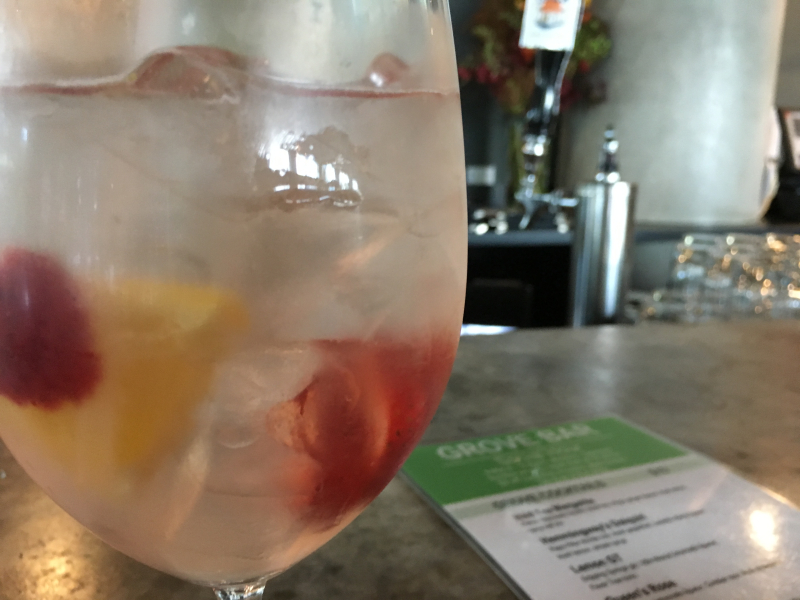 After a successful shopping venture it was time to celebrate. We made our way to where Maggie had another strategic blogger lady meeting squeezed in before her trip to China. As we were going to a networking event for the conference immediately after.  I hung out, ordered a fun little fruity number and worked on an ekphrastic poem in response to the illegible words we witnessed earlier. So began our spiral into a busy night of chatting with many many ladies who blog or work in the industry.  I received some wonderful advise but I can remember very little of it because there were so many conversations and no opportunity to write anything down. 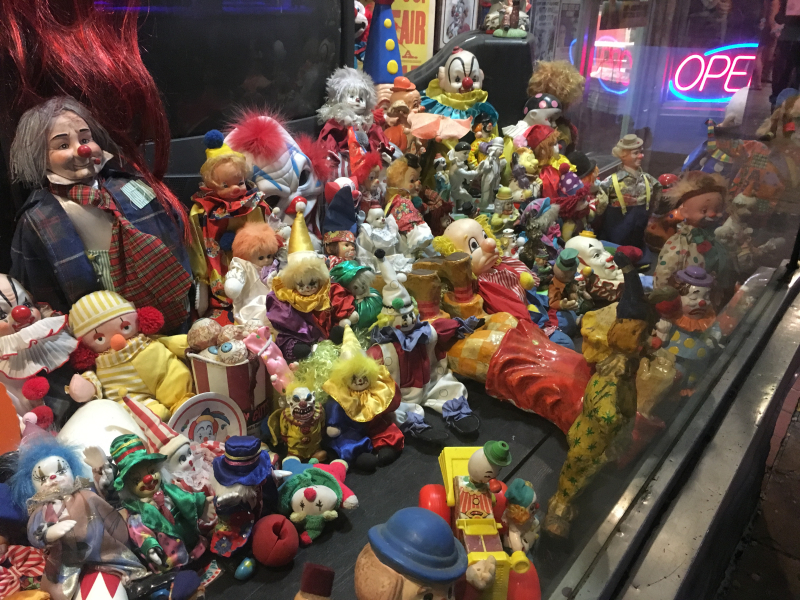 I, on my walk home via observing 6th street of Austin in its very calm pre-weekend glory, took this picture of creepy clowns in a window. Luckily, I had no dreams of them that night.