I walked into the conference on Saturday morning feeling well rested but I was hungry for food and good coffee. I thought that the coffee shop on the street level of the Austin Hilton where Blogher 2016 was taking place was an independent roaster, based on the signage.  No such luck, a Starbucks – but I made the best of it and ordered a Pumpkin Spice Latte with coconut milk (yes I drink these).  They had no coconut milk.  I cut my losses, got a sparkling water and headed upstairs. 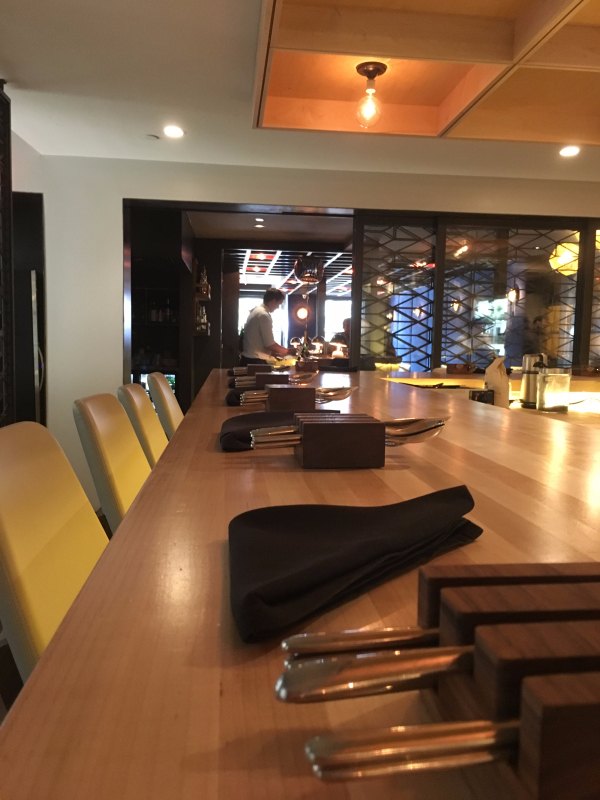 This fine morning there was not a protein option at breakfast – a strange site in a sea of foodies.  Luckily, the egg people out in the sponsor booths had egg sandwiches – because a hungry foodie cannot live on a hotel croissant alone.  For some reason I took no pictures of my cute little egg sandwich. I did however take pictures of the salad I ate for brunch at the food excursion where I ran into my dinner posse from the night before. 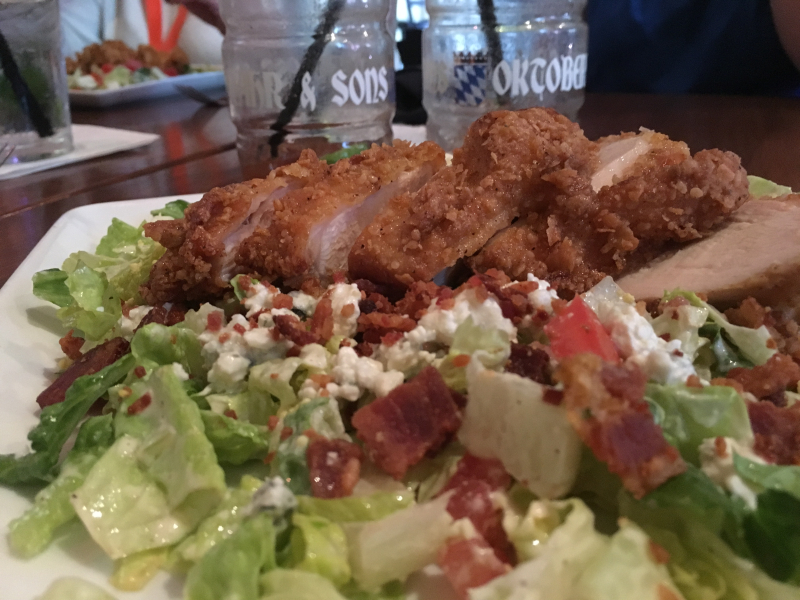 This salad was the lightest option on the brunch menu at Max's Wine Dive.  The original outing was planned to go to Geraldine's, a fine dining and highly rated brunch spot but it was cancelled last minute.  So here we all were at random brunch spot on a Saturday in Austin. Apparently, an establishment known for it is fried chicken – and the fried chicken on this salad was the bomb. I'm glad I got to eat it with lettuce and a couple slices of tomato along with my blue cheese and bacon. The person sitting next to me ate this.

I don't know how she did after the chicken and waffle extravaganza I saw her ingest the night before – but she did.

The rest of the conference content passed by uneventfully – I learned about how Pinterest isn't for me and then skipped out on the final Keynote/celebrity chef book signing to catch a reservation for a five course tasting menu at Counter 3.Five.VII. 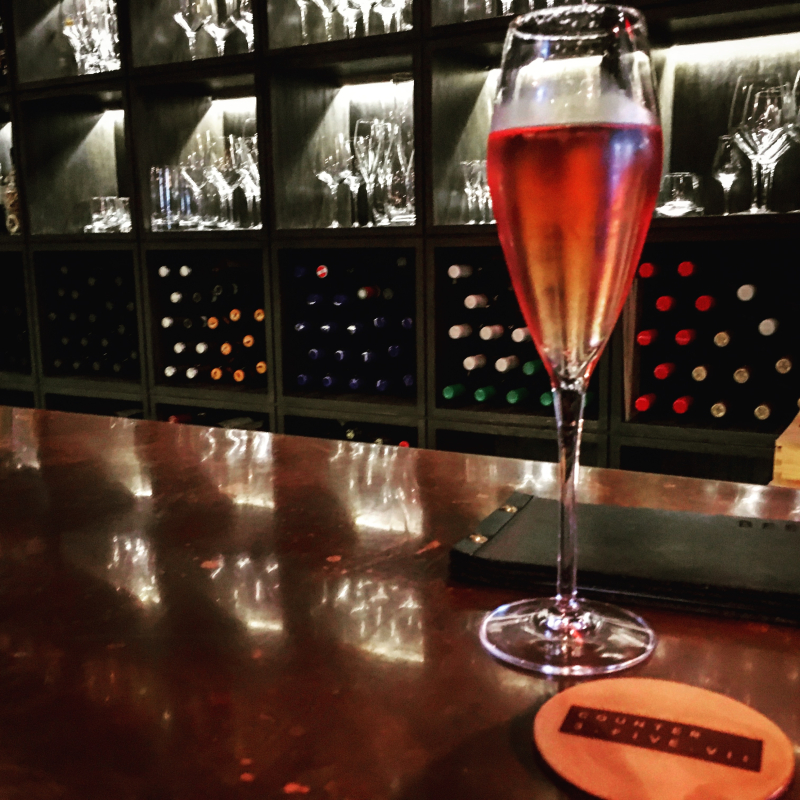 At Counter 3. Five. VII. you can choose between a three course, five course, or seven course tasting menu made in front of you in an open format kitchen as you sit at the counter and observe. 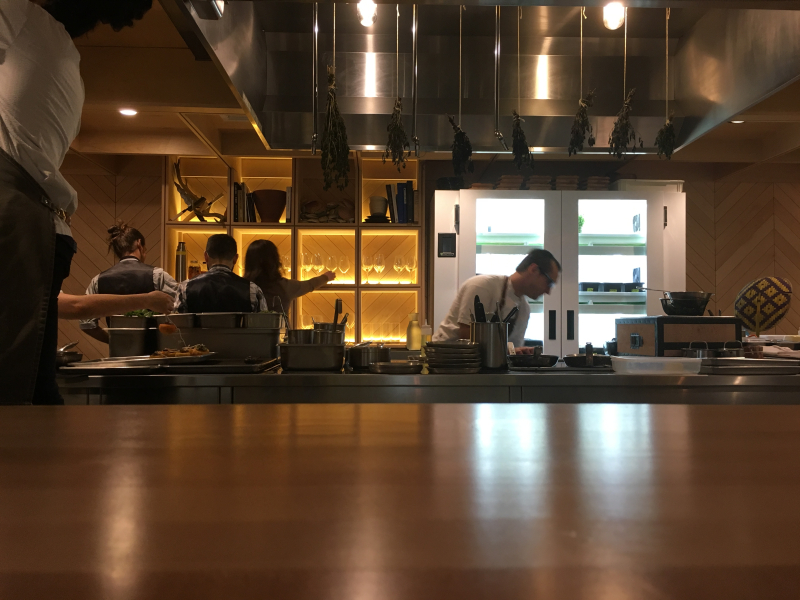 It was almost exactly like Catbird Seat in Nashville, except that the Austin chef team were way more laid back and nobody in the kitchen trained under Redzepi at Copenhagen's Noma – but I didn't actually research this so I could be wrong. It is a very similar ethic, using ingredients local to the Austin area. My reservation was for the five course tasting menu. It started with a fun drink and appetizer. 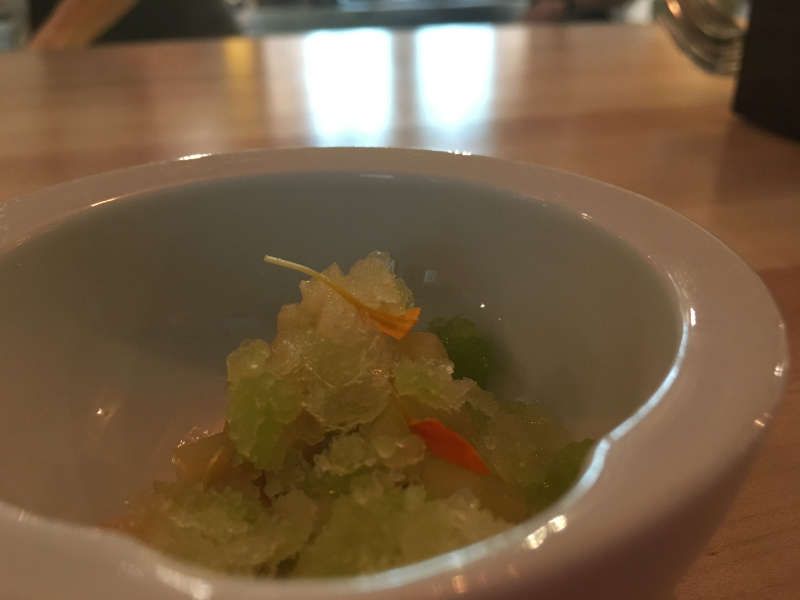 Then we moved right into the parade of beautiful courses. 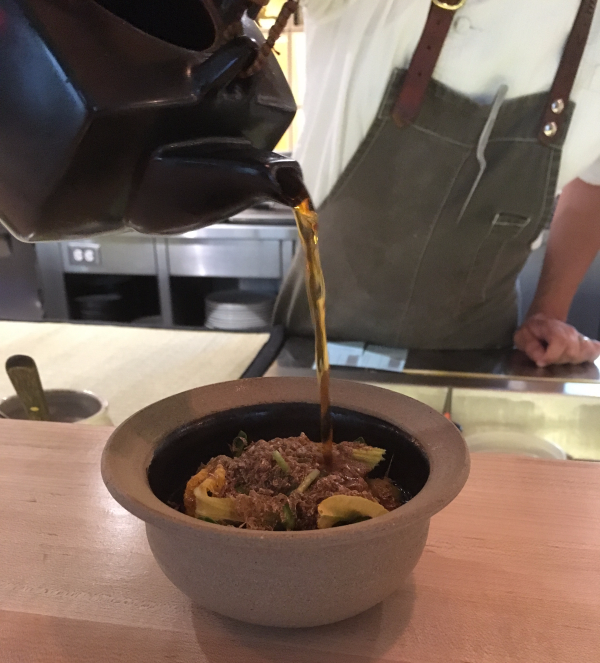 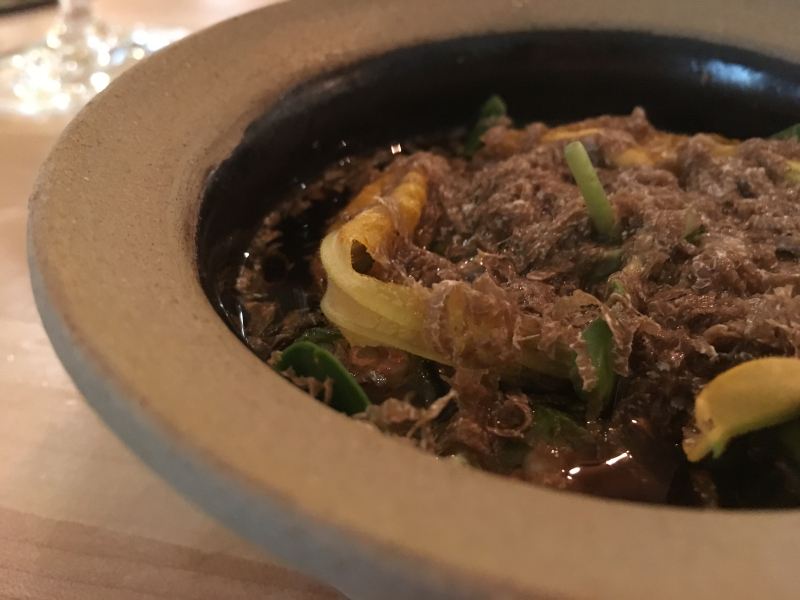 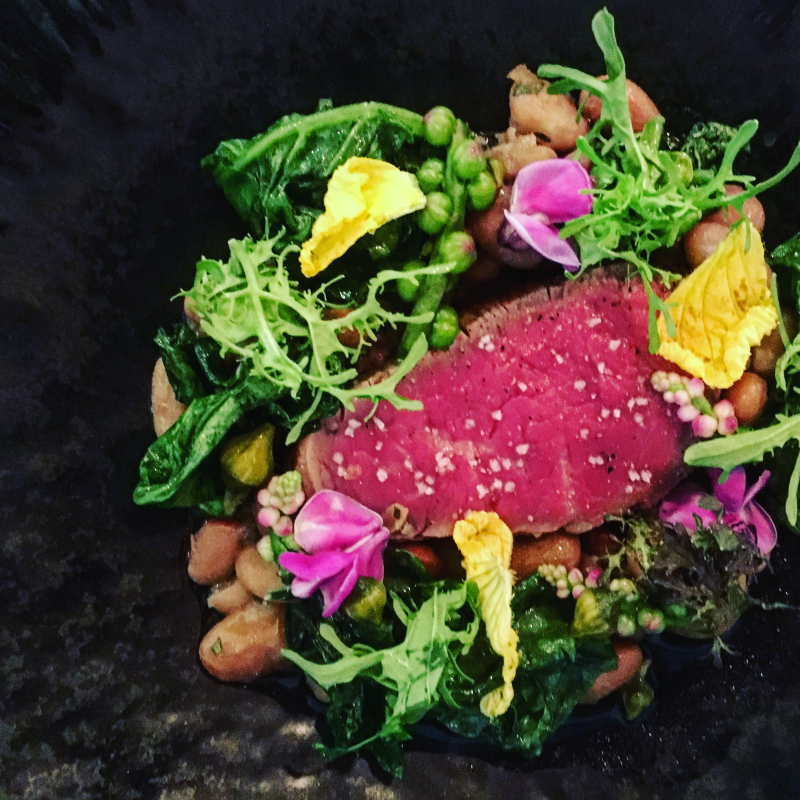 Above – steak, lufa berry, lufa flower, pinto beans, spinach and hyacinth. And finally I was at the dessert course – but only after I had time to play around with my camera and a few attempts at taking some type of artistic shot of the cooks behind the counter through my glass. 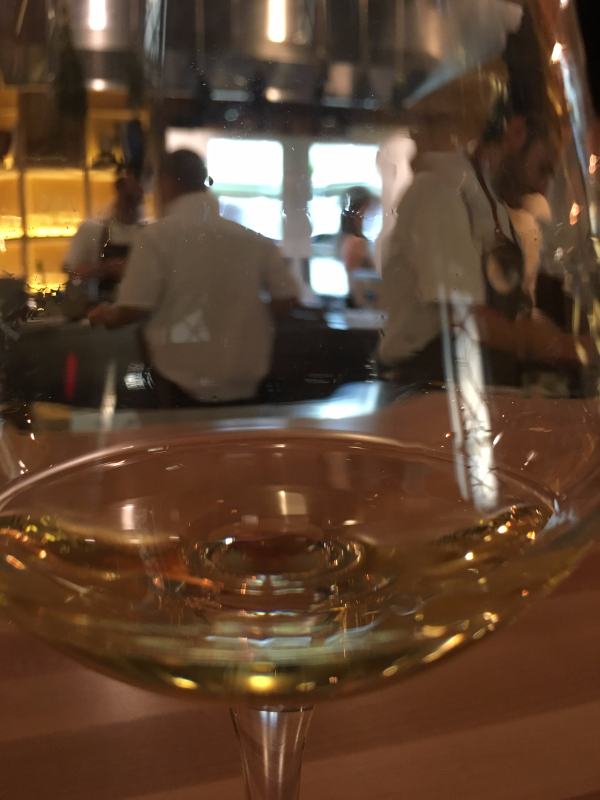 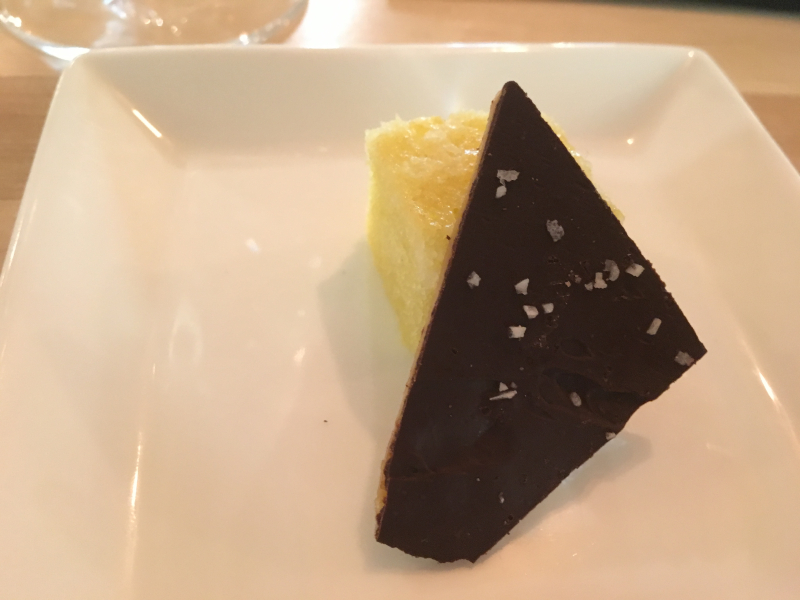 I was officially very done and beyond full.  It was time to go to the Blogher Foodn2016 closing party. 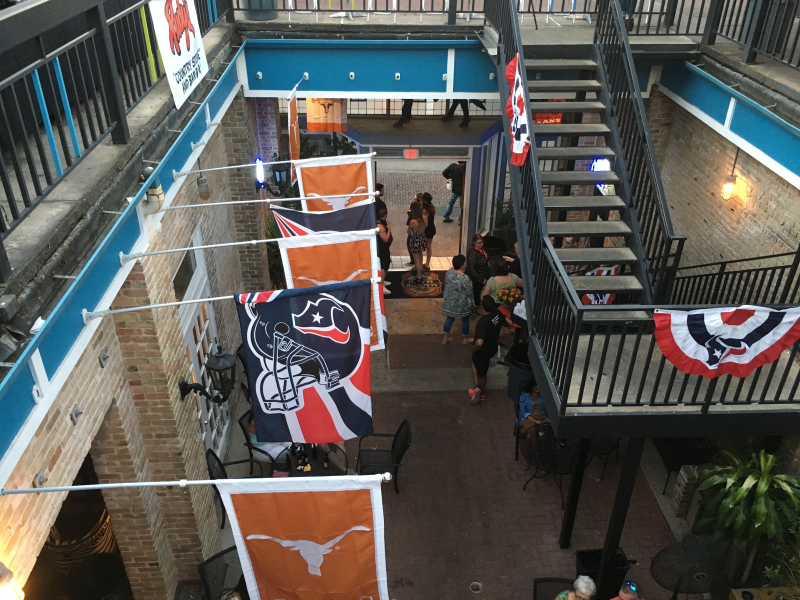 The closing venue was a large club on Austin's 6th Street called Maggie Mae's.  There was a wonderful live singer in the bottom right hand corner of this photo when I got there – she stopped not too soon after that so the not-so-impressive DJ could start spinning.  I looked around for the friends I had made and found none so I put the networking hat back on. 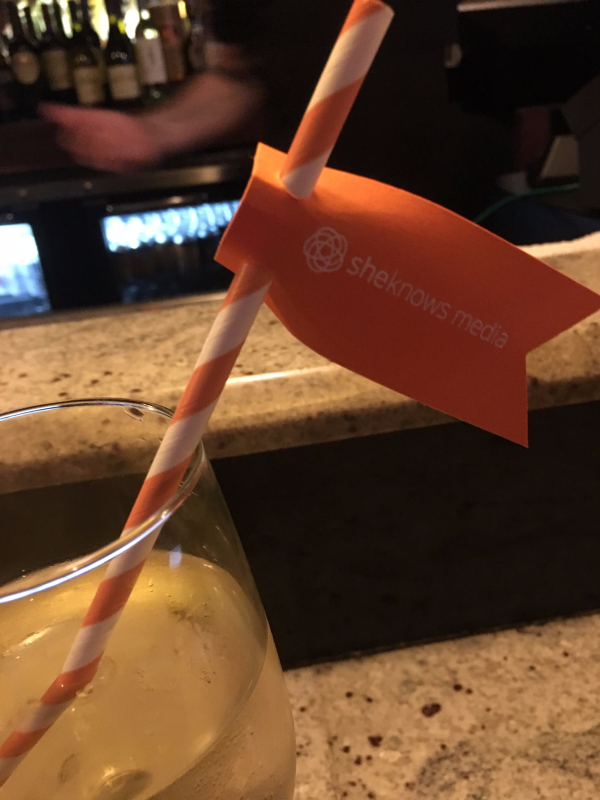 But first I made friends with the bartender so I could ditch the standard issue plastic cup and move on up to a descent wine in a stem glass.  Apparently Blogher spent a few dollars on branded straws – I thought that was quite funny – and didn't help the taste of my wine. 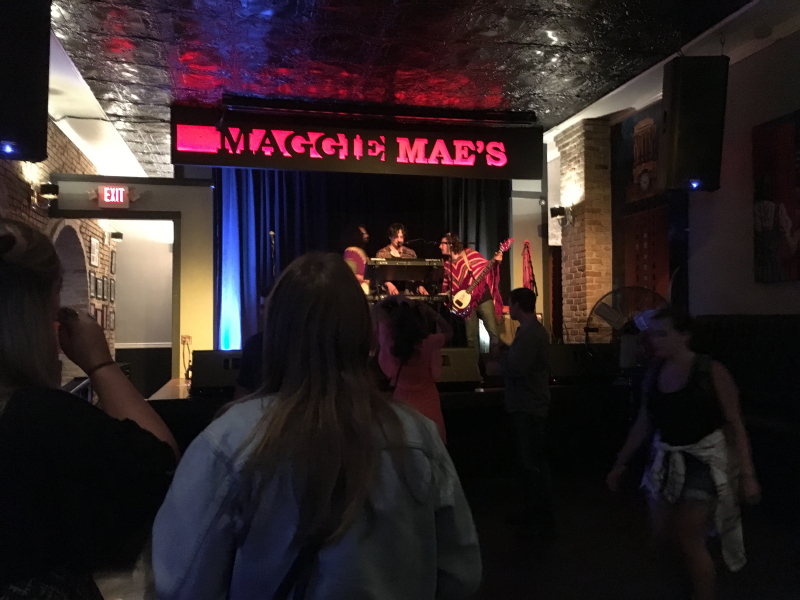 Eventually, I found my friends and they convinced me to join the dance party and eventually we were the last people from the conference at the party still managing to enjoy the DJ until we didn't anymore.  At this point the last remaining members of my small little band decided it was time to leave – we left the club together and headed down 6th street toward my residence and then suddenly there was a cab in an opportune location and poof!  Bye everyone I waved as they disappeared into the night leaving me in the center of 6th street mayhem alone.  The clock had not yet struck midnight. 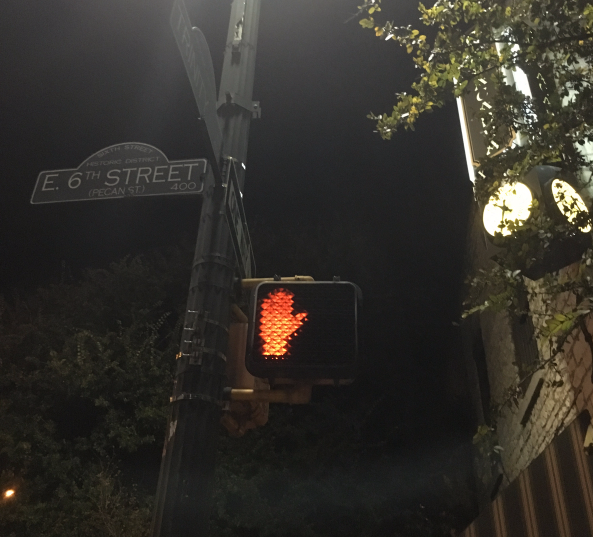 I decided it was time to walk carefully home and exit the drunk cacophony as quickly and safely as possible.  It is at this very moment, congratulating myself for not being intoxicated after such a long time, and dodging a drunk person that I managed to step right into a pothole and go flying face forward, sprawling all over of the street in a display of amazing grace and agility. Ouch said my knee and foot when I tried to stand with my wounded appendages and pride. The drunks walked by unfazed by my plight. I hobbled into the nearest bar to catch my breath.  As a bonus I found myself in an Irish pub with a live band playing what appeared to be real Irish music.  I sat and listened as I flexed my knee and psyched myself into making the rest of the four block walk home. A wee bit after midnight, I gathered myself and limped home in hopes of sleeping off my fall and fun evening.  Sunday was my day to be a tourist in Austin and I was looking forward to brunch already.