The world that I lived in when the events of this post happened now feel like a million years ago or a different universe entirely.  I should have written this post before the middle of October, but I had writers block, and I was dating, and election coverage was mind sucking and I was blah blah blah not writing and you don't care why. I will stop boring you. 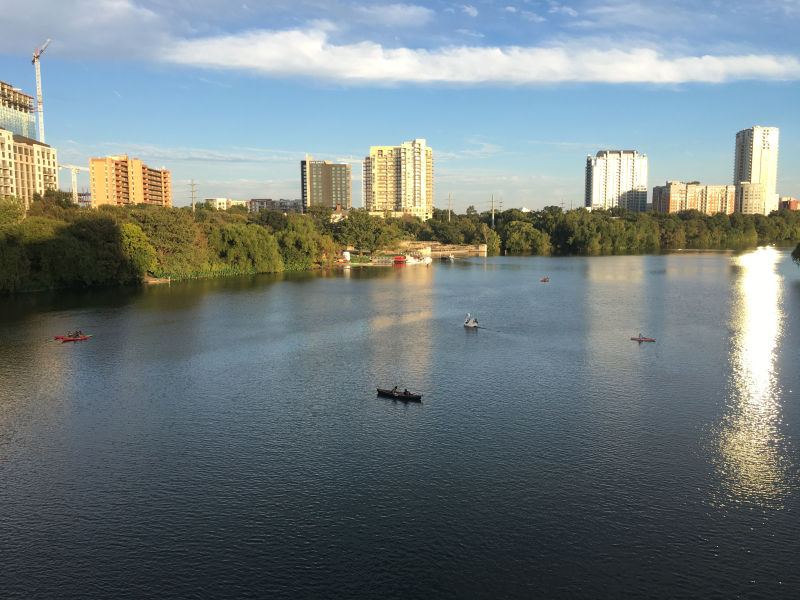 Today it is past the middle of February – we are four weeks into the new president and I have much gratitude for the US Constitution, I'm in a new relationship and planning a trip to Scotland with this new significant other, I'm about to head to Arizona for my annual friend vacation, and my dog has a new lease on life now that he is heavily medicated for all of his pain causing issues.  Life is groovy with the exception of the deep concern I have about "he who shall be called 45" and the Russian spy ship that is loitering 30 miles off the coast of the United States and the prose writer's block I've been harboring since October. Today is the day to write about a Sunday in Austin, Texas five months ago where I did not see any bats. I did however start out that day with a lovely brunch at Forthright (aka no alternative facts). I was able to walk right in and get a seat, not with a river view as I had hoped, but at least a good people watching vantage. I was also eternally grateful that I was still able to walk.  The night previous the pothole in the middle of 6th street found me without grace and agility and knocked me down in the middle of the street. Er, well, it tripped me, sending me sprawling into the street where I landed a bit hard on my knee and limped away stunned and embarrassed from a crowd of un-noticing drunk people. 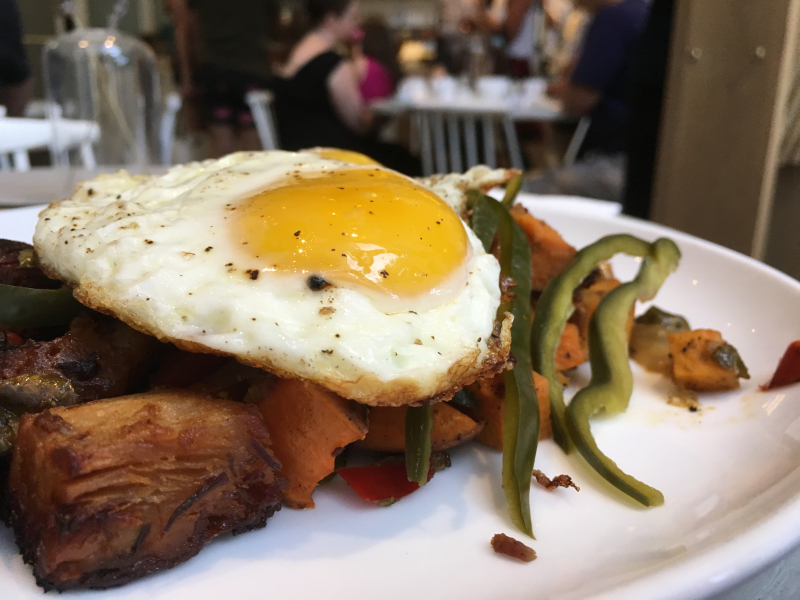 In the morning I found myself in pain. The strangest feeling was emanating from the top of my right foot and my left knee was a lot larger than it should have been. It was a unique pain happening when I bent my foot and it made navigating the steps down from my "lofted" bedroom in the hippy commune airbnb flat quite the fun time.  But I had brunch to get to, because it was Sunday and I had an entire day to walk around Austin, on my injured foot and knee, and I was going to do it, no matter what. At least my ankle was not broken and I could still walk around unassisted. 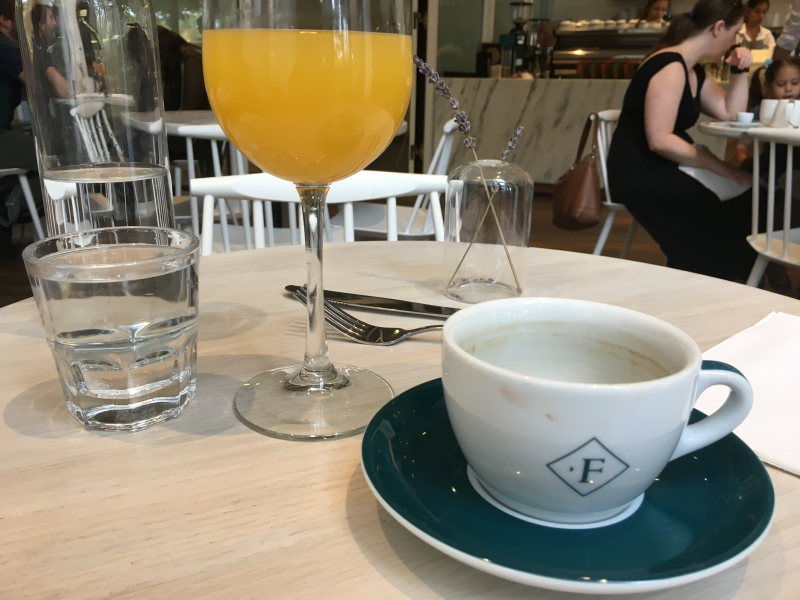 I made myself believe it was nothing that a bit of good brunch, coffee and a mimosa could not solve.  I was partially right – with the addition of force of will. After brunch I also needed to walk off the pork belly and pickled pepper hash. 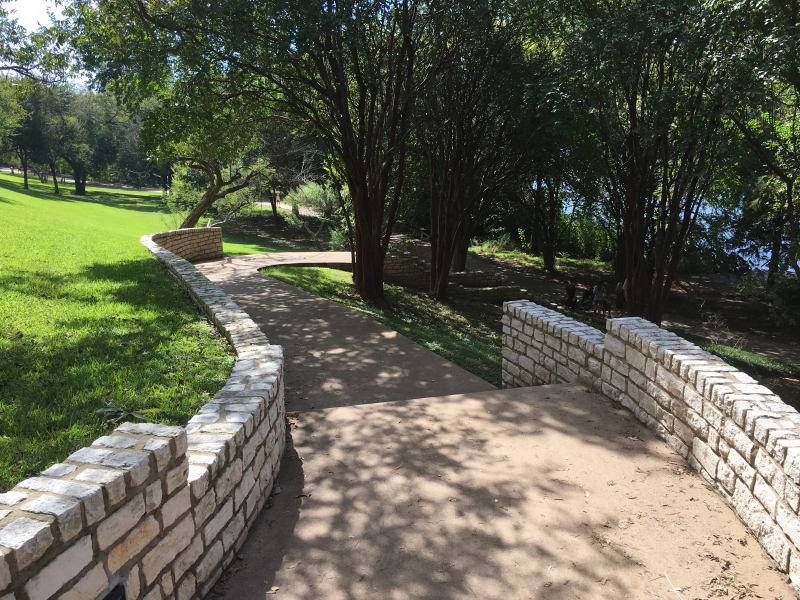 It was a beautiful day after all. The sun was shining, the heat was not too much, it was perfect. 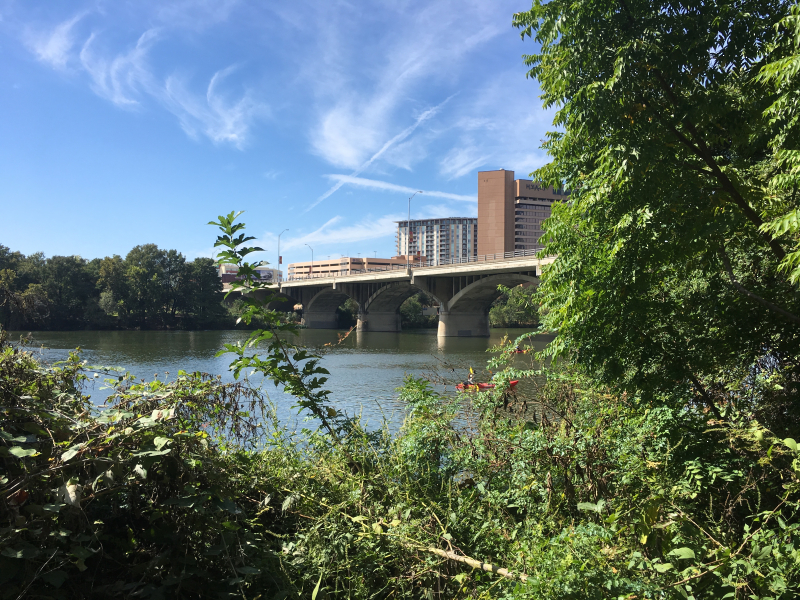 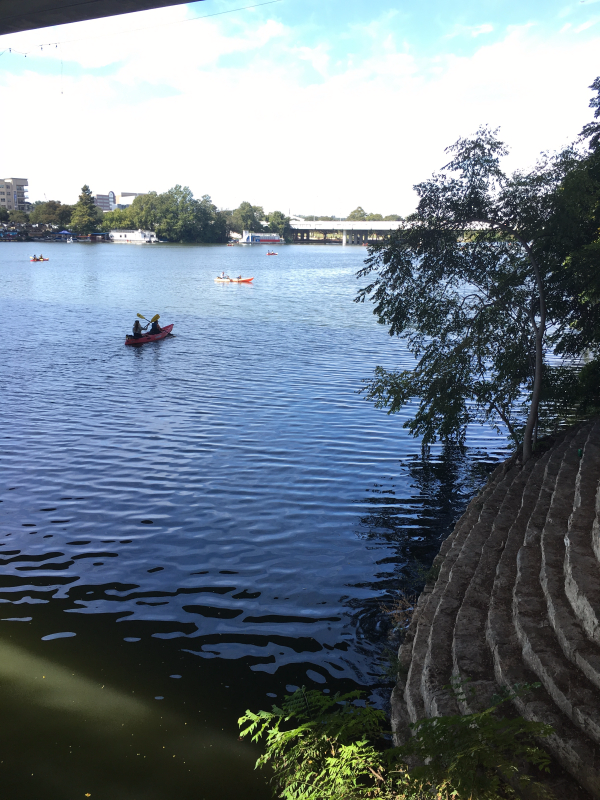 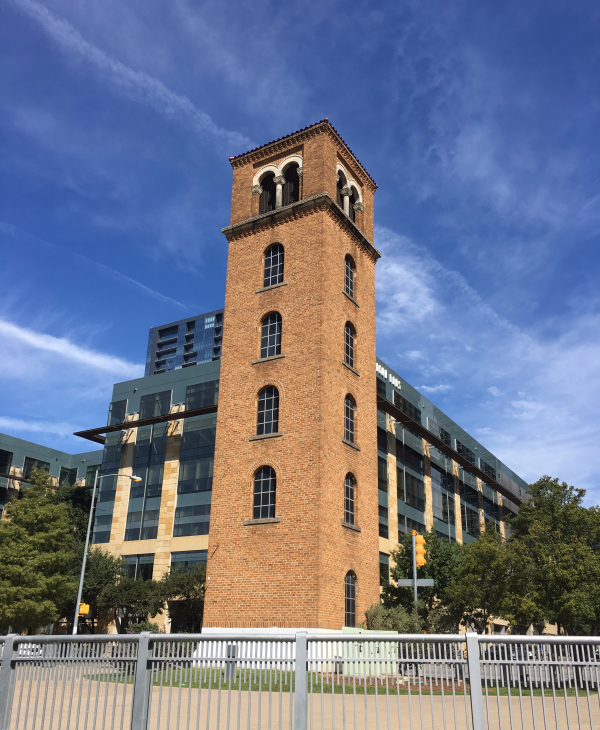 I walked/limped slowly along the river.  I stopped under the bat bridge and listened to the sound of bats hanging out in the light of day somewhere in the depths of the bridge and took in a good sniff of bat excrement. I watched people enjoying the sunny low key Autumn day and I wondered where we would all be in a month after the election.  Those were the days. 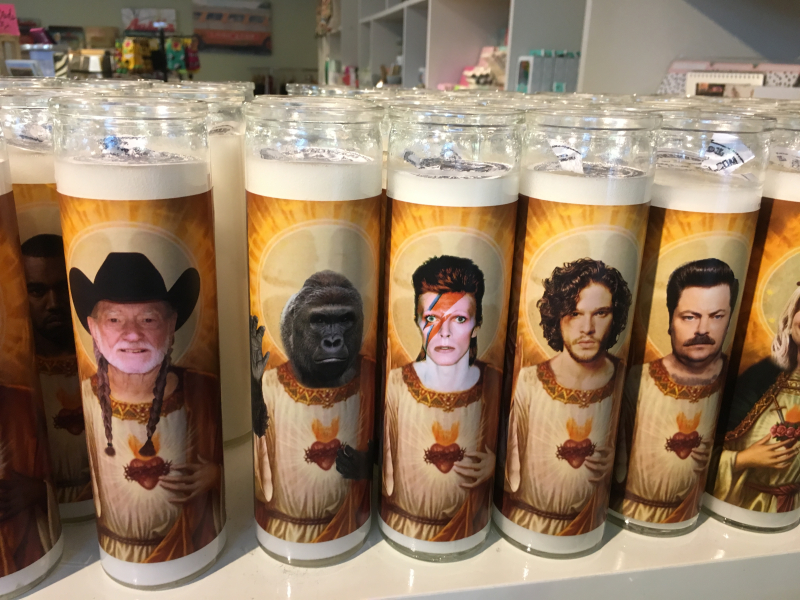 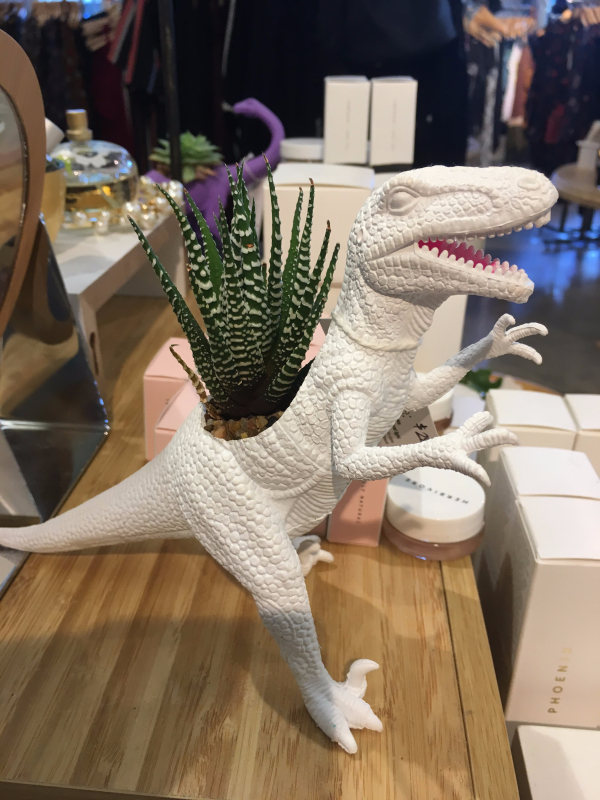 I found a store with David Bowie candles and T-rex plant holders and funny cards and I spent way too long there.  I bought a travel journal, a David Bowie candle and a couple of the funny cards and realized that I was wandering aimlessly.  I came to the unhappy realization that in my previous travels, at least in the last year or so, my wanderings were very attached to me wanting to share every bit of my experience with my ex-boyfriend. I wondered how this happened and how I had not even noticed that I stopped living my own life somewhere along the way.  It was a great moment of self-discovery. It was time for me to figure out me again. What was I looking for wandering alone the streets of anywhere? In that immediate moment I was looking for a sunny place to put my aching foot up and perhaps drink another mimosa to try to forget said foot's aching.  Luckily, thanks to the cafe I walked by soon thereafter, I found myself with a pitcher of grapefruit mimosa, an outdoor seat in the sunshine, and a plate of yummy goat cheese filled beignets. It was a beautifully satisfying moment. 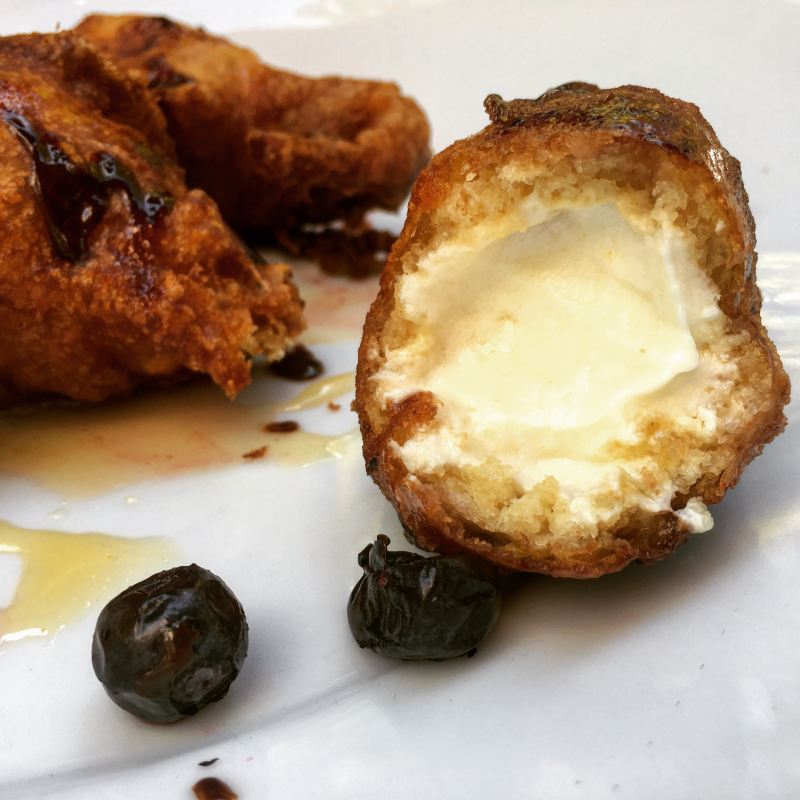 I sent a picture to the fellow I was currently dating, who I met via OkCupid, and pretended I was having a lot of fun without him – this brought me a lot of satisfaction when I realized I was having fun without a "him."  Then my co-worker walked by, who was in town for the Austin City Limits music festival.  I knew she was in Austin, but I didn't expect to see her because I was in the city and she was at the festival. But synchronicity interceded and we saw each other, exchanged pleasantries and then she and her friends went on their way leaving me with my pitcher of mimosas and the bee who was very interested in my beignet syrup.

If I was sitting at that Sunday table in October 2016 today, in February 2017, I may have spent the rest of the afternoon writing poetry at that very table – some of that poetry would be political.  But I wasn't quite at the point of writing poetry again (and I thought political poetry was banned to the Bush years). Instead I was at a point of personal confusion, on the edge of abyss with my own demons and personality.  I just propped my swollen leg up on a chair and stared into space as I slowly drank my giant ten dollar pitcher of mimosa and figured out what to do with myself literally and figuratively. 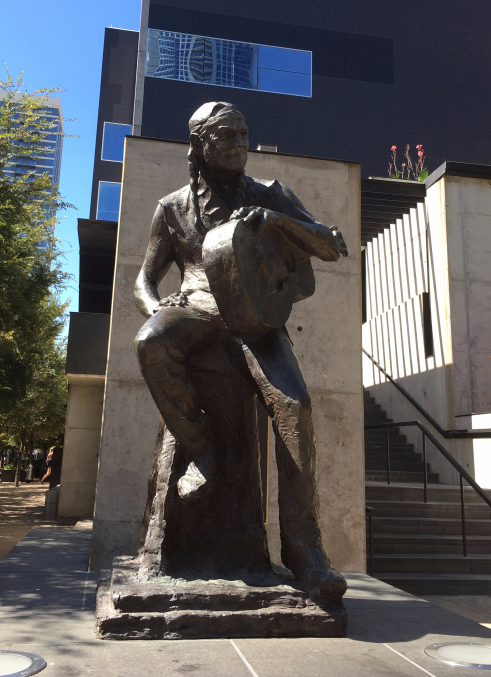 I eventually got up from that table and walked down the street to say hi to the statue of Willie Nelson. Then I wandered aimlessly through downtown Austin trying to find the places I found the last time I was in the city and failed to find them. Tired, in pain and thirsty I sat down somewhere moderately safe to determine a real destination for my feet in Austin.  I found a place called Easy Tiger Bake Shop and Beer Garden and it seemed a pleasant place to sit with my computer for a while and write about my trip thus far – when I got there and realized I wasn't carrying my computer.  So I just ordered a pretzel and cheese dip and sat. 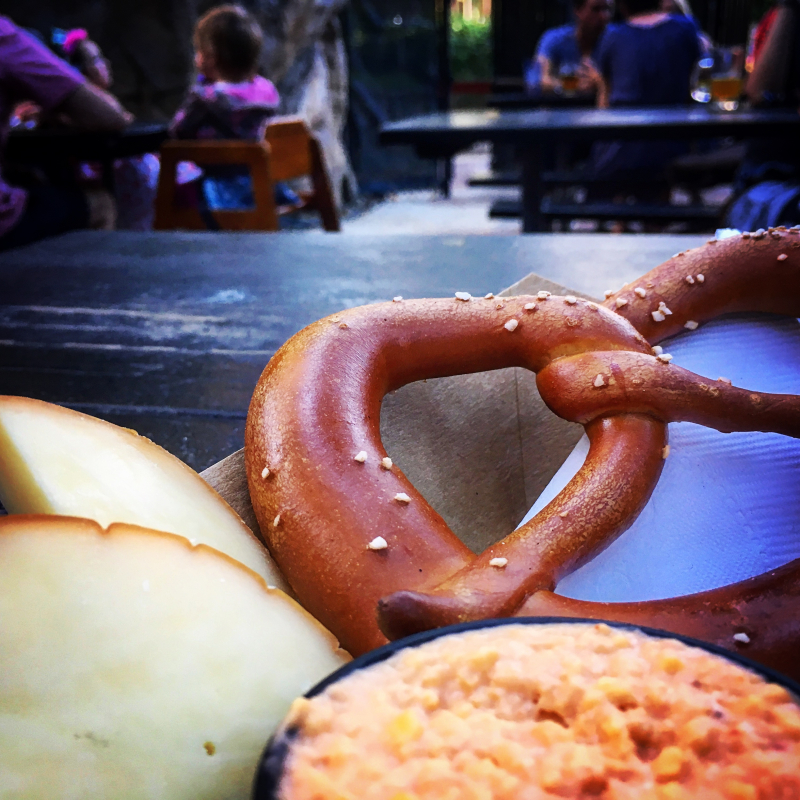 While I sat with my second baked good (with cheese) of the day I realized that I wanted to try and see the famous Austin bat bridge and its accompanying bats, even with the information that it was out of season to see bats. I knew there were still bats there, I smelled them that morning, I heard them chirping from within its depths, so they must be there and perhaps they would put on a good show. 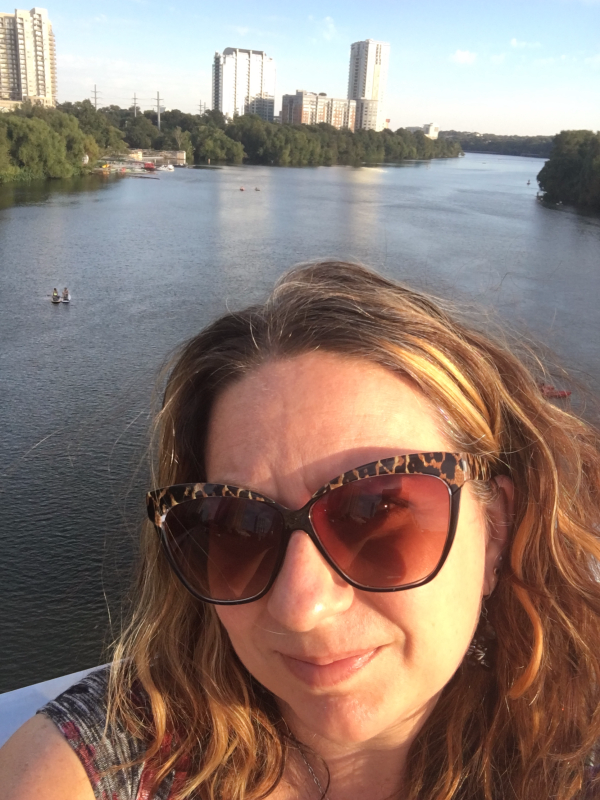 So here I am still pretty excited that I am on the bat bridge waiting to see the bats. Look at me with purpose – how cute. 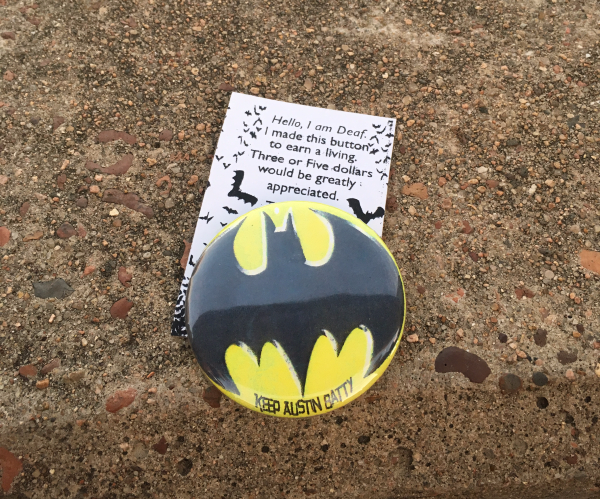 Here is the bat pin I bought from the deaf guy, who, after I gave him the money he asks for on the pin, still tried to take it back from me.  But apparently he reads lips as I loudly exclaimed that I gave him his requested donation, and he begrudgingly allowed me to keep the pin.  Meanwhile, the family next to me was not doing so hot. The small children were very confused as to why the bats were not cooperating and just coming out to show us their stuff. Many an occupy the children type of activity followed including the "don't stare at the nice woman next to us" talk. 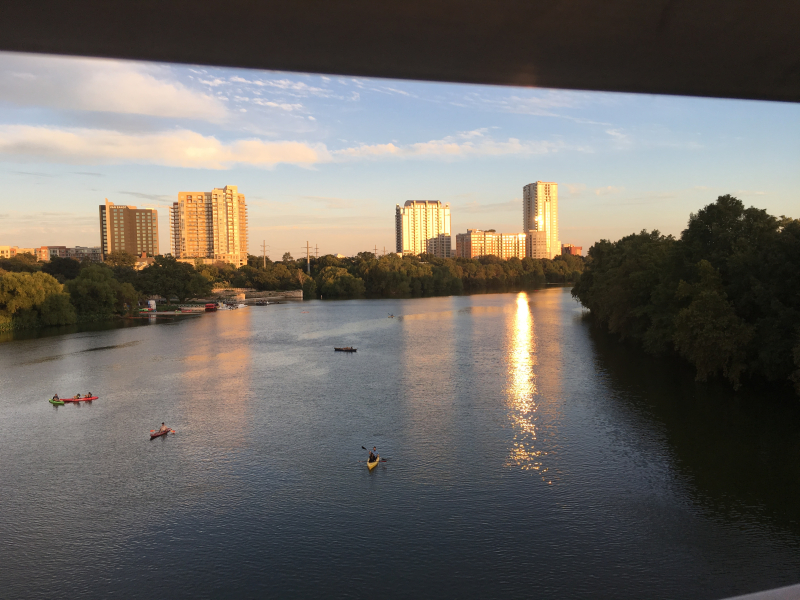 Then the shadows grew and the sun dipped and the bats still did not come.  I called my dinner reservation and said I'd be there after I saw the bats – the restaurant told me that they understood the bats were not on a particular timeline. 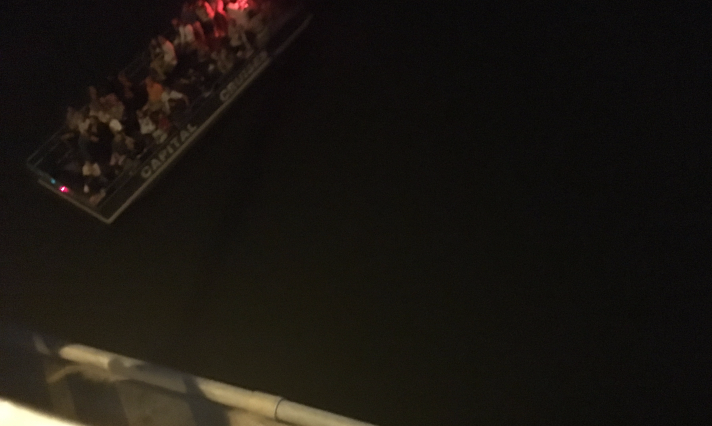 Then finally, it was completely dark and you could almost see their little bodies flying around in the dark under the bridge. I called it and stated to myself that "this is good enough" and started my walk to dinner before everyone else gave up.  It was a good attempt – bummer the bats didn't participate. I at least earned a decent dinner for trying. Fixe is famous for its biscuits.  The chef made his mother or grandmother's recipe.  In some ways that is the entire reason I chose the place.  They were amazing biscuits. 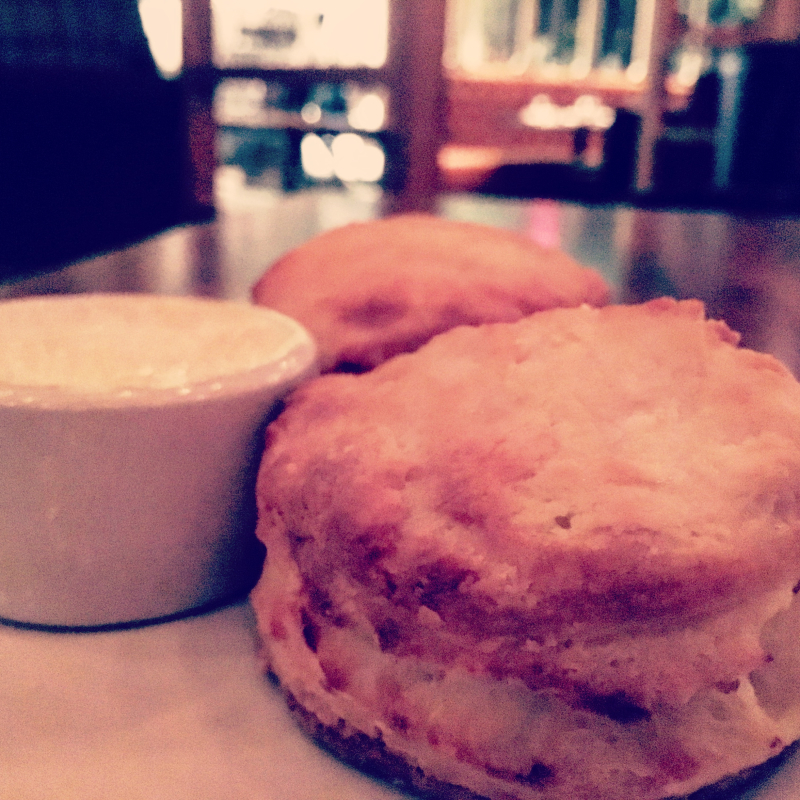 Flakey, fatty, luscious heavy piles of dough that cried to be eaten while still warm and steaming – promising all of the comfort of a loving grandmother's arms and heart disease if eaten too frequently. So good – five months later I'm drooling at the thought.  They gave me three, I ate two and got one put in a box for the morning ride to the airport – I would eat it cold and remember the glory of its former warm self. 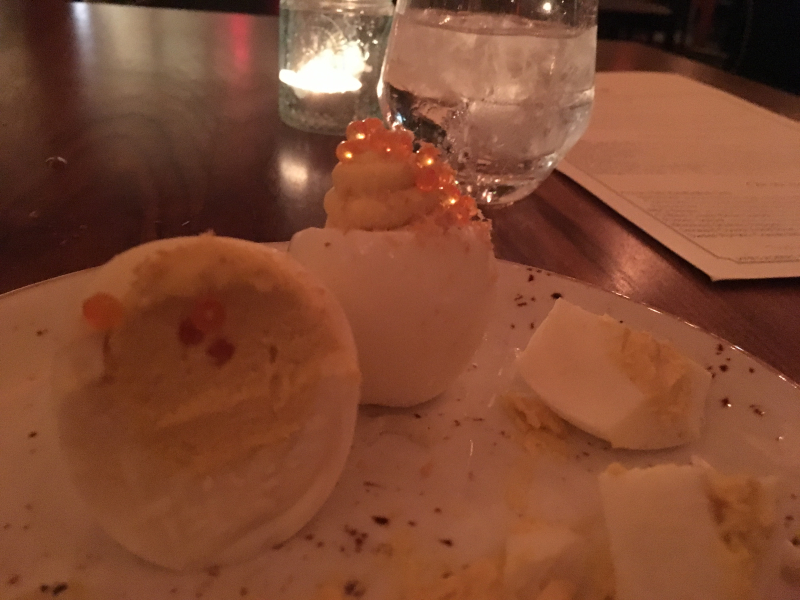 Then there were the deviled eggs with sauerkraut and roe. Enough said. Then the vegetarian (and therefore healthy) grits option – followed by the steak tartare and its pancake cracker friends.  All things were tasty and rich and I wasted food because it was impossible to even get close to finishing any of the above and the refrigerator at my Airbnb was still broken.  I also had to leave for the airport before 6am the next morning so it was time to go to bed with with my exceptionally full stomach and biscuit in a to-go box for breakfast. 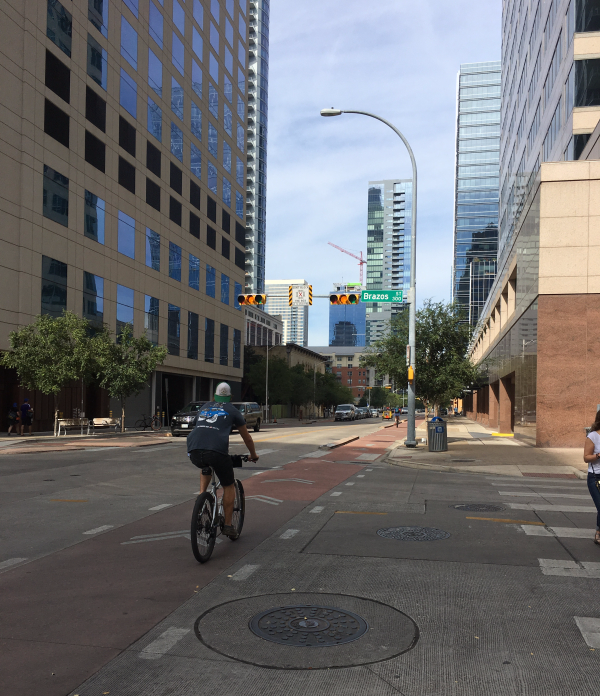 It had been a great time in Austin but it was time to return home to see what my new life in Seattle had in store.