Wednesday's plan included a 4 plus hour car journey to Savannah with a break for BBQ in the middle. Knowing we had a journey in front of us we started our third day in Atlanta by going out to a real breakfast place (that was open) before hoofing it to the airport to pick up the rental car. 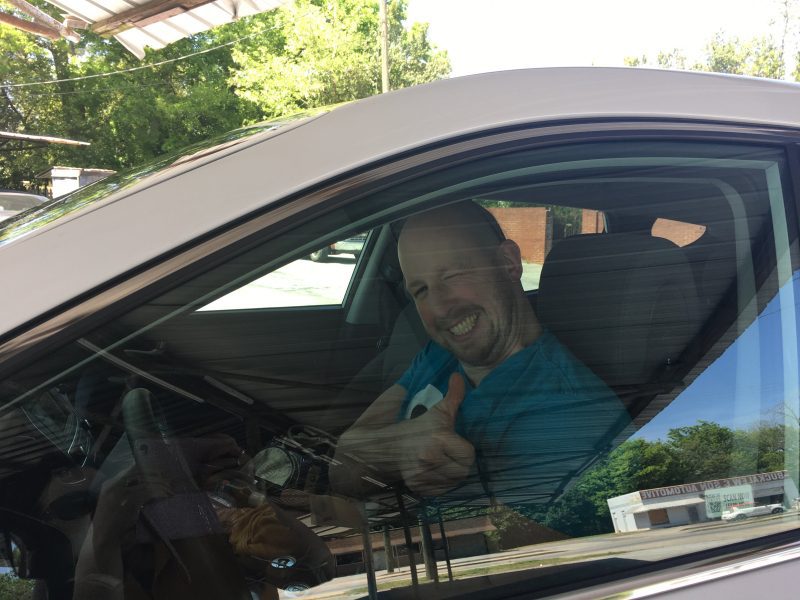 We chose a place called Thumb's Up Diner – it featured homemade jams, pancakes and other Southern specialties like fried catfish and grits. 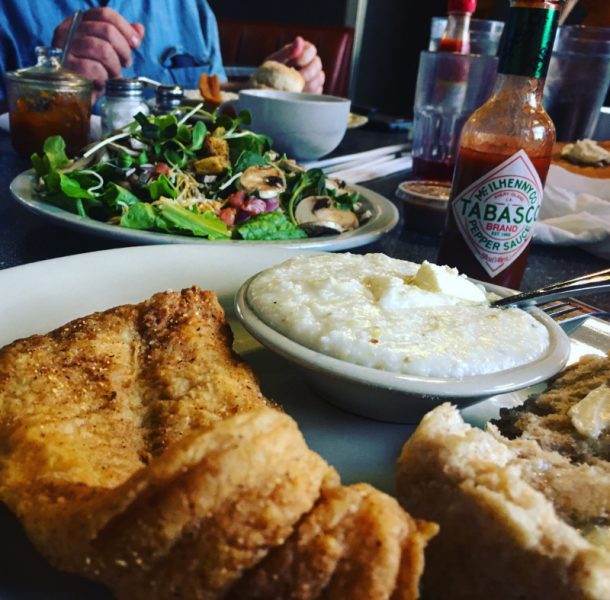 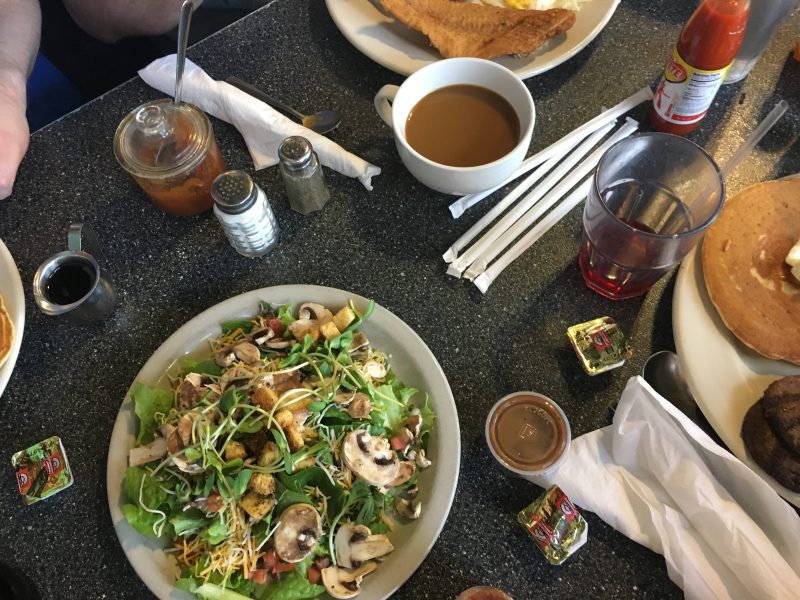 The fried catfish was breaded perfectly and their coffee was served in cups the size of bowls – they also had the largest breakfast salad ever. It was quite exciting. We checked out of the Airbnb and made our way to the airport via the slow street car, the MARTA train, and the very fast airport Skytrain to the gigantic Atlanta rental car center. The rental car center was is own humongous compound far enough away from the airport that once you start driving South, you have to pass the airport again to keep going South. You can tell just how large and busy the Atlanta airport is with the size and scope of its rental car program. Finally though, after over an hour of commuting and waiting in line we and our luggage were loaded into an SUV and driving in the direction of Savannah.

About an hour later we were in Macon, Georgia driving on a street name Bacon to avoid some type of something on the narrow road ahead of us on the way to Fincher's BBQ. We also passed a lot of boarded up buildings and had a general sense that this area of Macon that google maps directed us through was very economically depressed. We did eventually find Fincher's BBQ, it too looked like it had seen better days, or at least different days. 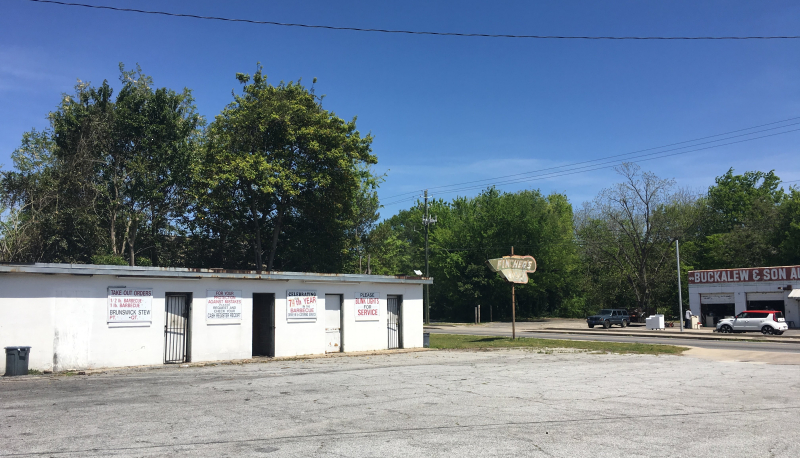 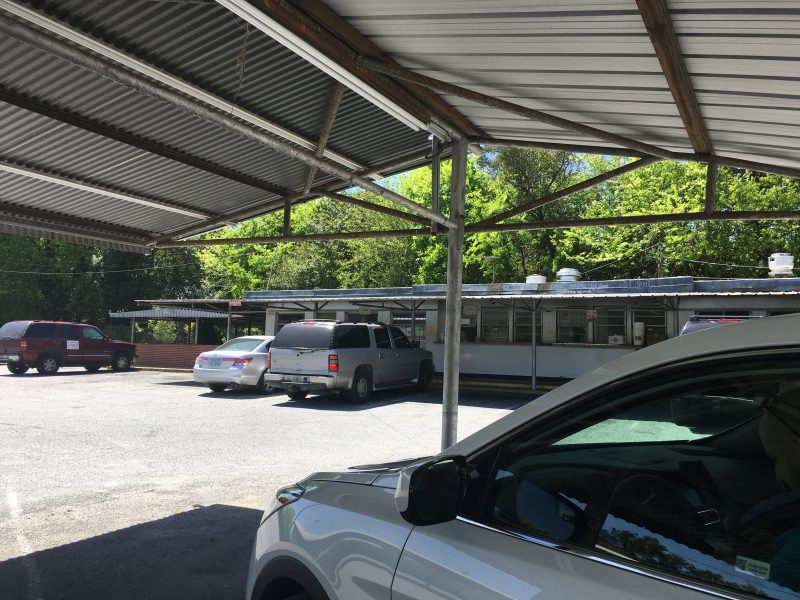 Inside (when we figured out which door to go to) we found friendly people and the 4th generation proprietor – who pointed out that his family's BBQ had been requested to be on two NASA space missions and that they were famous for their pulled pork. 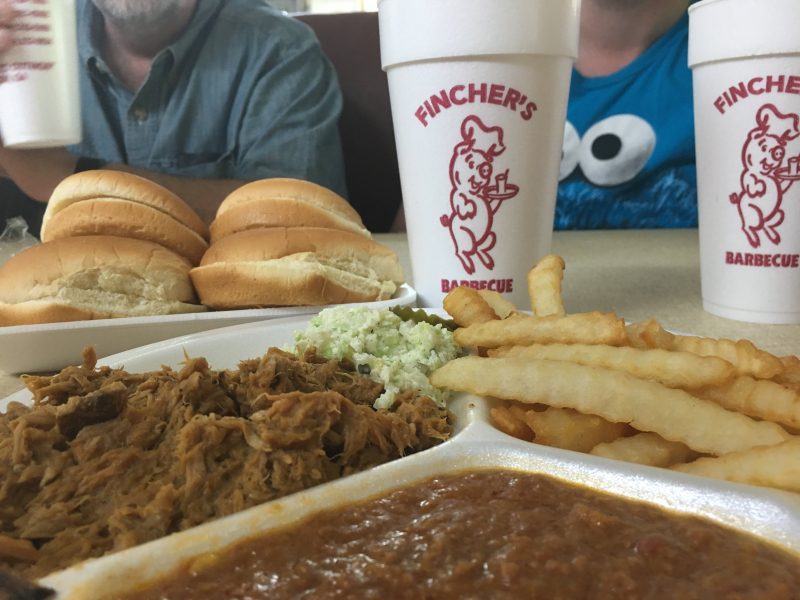 When one of us tried to order the rib plate we were instructed by the very friendly waitress that we should instead get the BBQ plate that featured their famous pulled pork and New Brunswick stew. Their BBQ was famous and had been made the same way for multiple generations, with the exception of the brisket. "I came up with the brisket!" Said the proprietor, proud of his expansion of the menu offerings. "But you should get the pulled pork, that is what went up into space with the astronauts." He said referring to the news article behind him entitled "Pigs in Space."

Jeremy got a sandwich featuring the pulled pork that had some type of creative name.  The sandwich was around $3 and our plates were $8, it was the most reasonably priced BBQ I had ever come across. It was all quite good, including the coleslaw that had pickles in it, and the New Brunswick stew that had corn and something else not quite identifiable but made you think of Manwich meat product in a can but not as sweet. The pulled pork was the best thing on the menu, and their BBQ sauce was of the Carolina BBQ family – tangy with lemon, vinegar and mustard. I purchased a couple bottles on the way out as we thanked the staff and proprietor again for their hospitality. 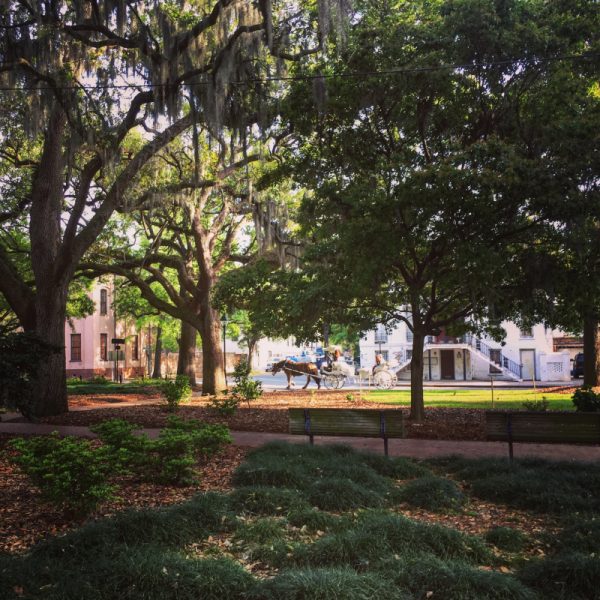 About 3 hours later, after a couple side trips for gas and random shopping we made it to historic Savannah. The square our Airbnb was on looked exactly like the square John Cusack's character stayed on in the movie Midnight in the Garden of Good and Evil. So did the square next to it however, so it is really hard to tell if we are on that exact square or if we were staying on a different square, but alas – does it really matter?  I did not see anyone walking a dead dog. I did, as the picture above suggests, immediately spot a horse drawn carriage. 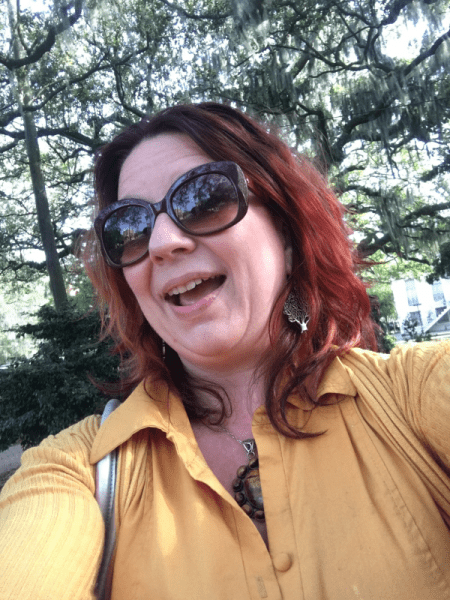 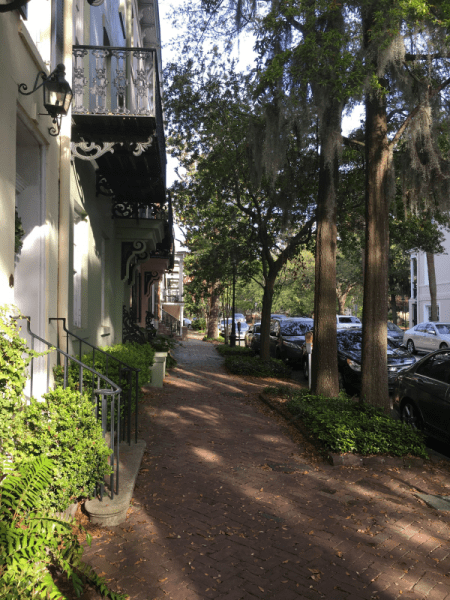 After checking in to our Airbnb and meeting our host "The Professor" we got the strong feeling that Savannah is not a very big place. We freshened up and checked the clock and decided it was time to roll the dice to see if we could get into Husk Savannah without reservations. We did. So I was able to complete the holy trinity of Sean Brock establishments, or so I thought until our lovely waitress informed us that another Husk had just opened in Greenville. Dang it. I am not getting the t-shirt. 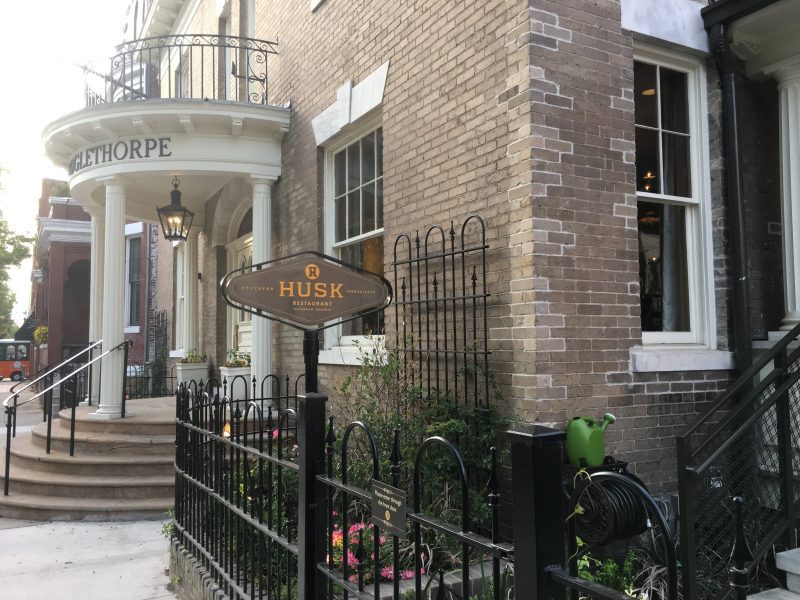 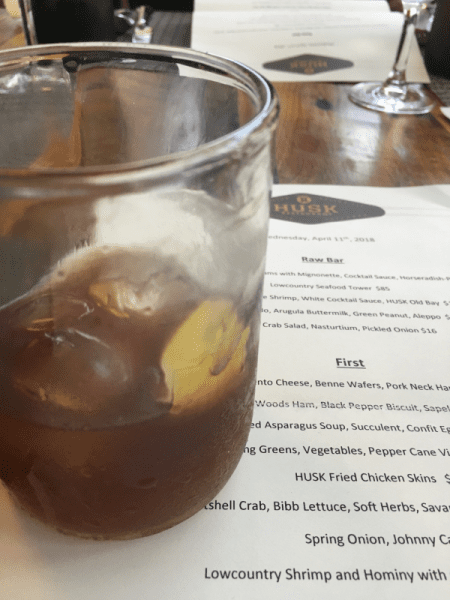 Sean Brock is obviously doing very well as the executive chef of his Husk empire as they clearly have budget to invest in large old historical buildings. Husk Savannah will also eventually be a 280 seat restaurant according to the lovely staff person assisting us with our food journey. We started with the raw bar, because we could, and made our way to the dinner courses. 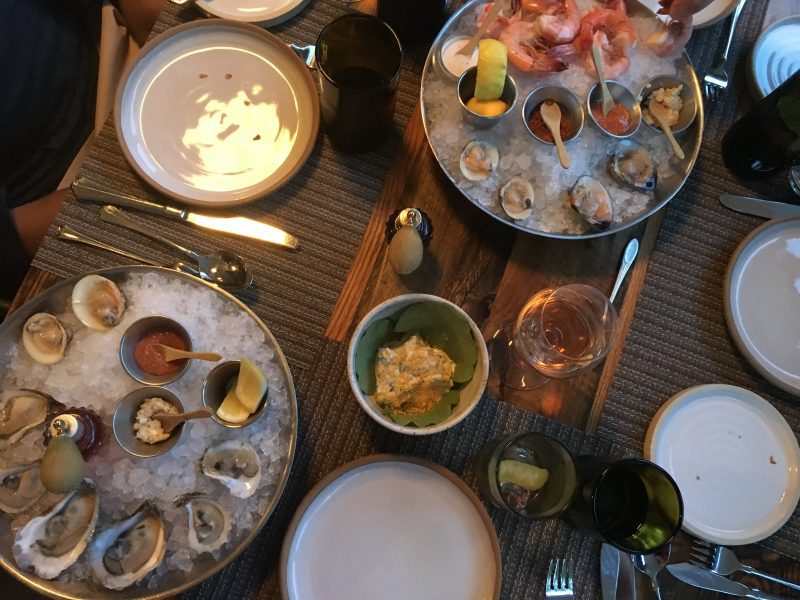 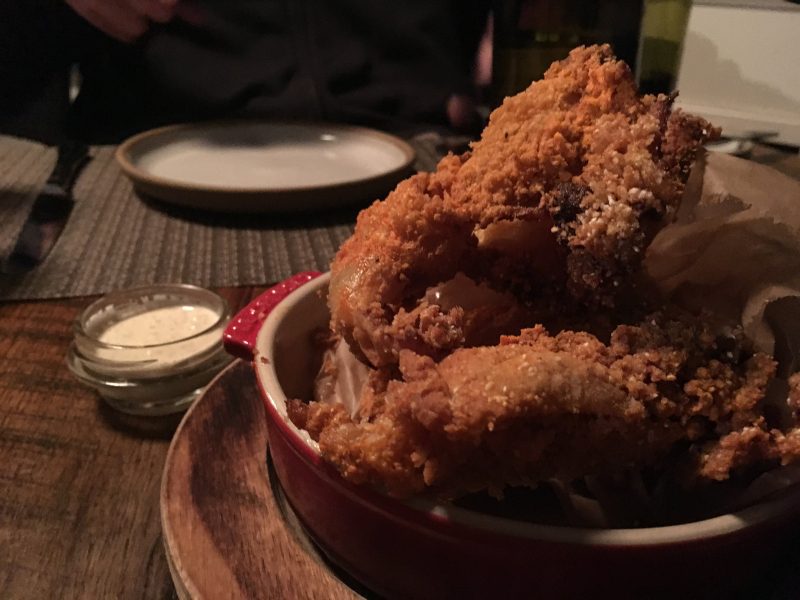 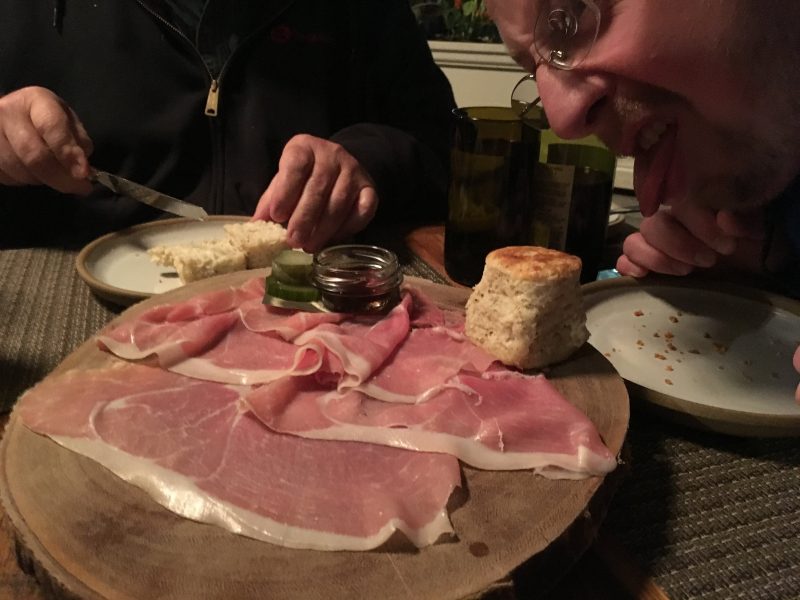 For our next course were the very light and fluffy diet foods of fried chicken skins and cured pork, followed by a pimento cheese plate. 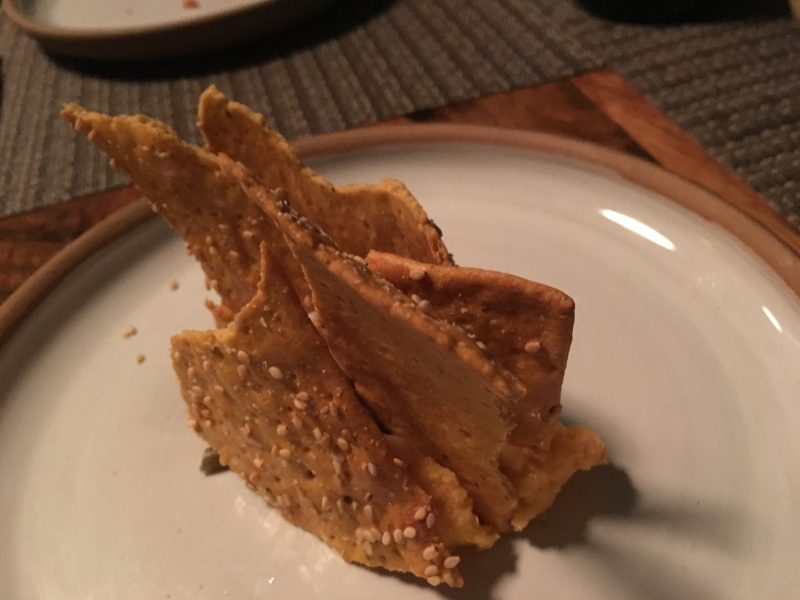 This pimento cheese plate was the bomb – it was made with four cheeses including two kinds of sharp cheddar from local dairies. After being mostly full on appetizers and other must have dishes, our main course of vegetables, cornbread, beef and pork and pork arrived. 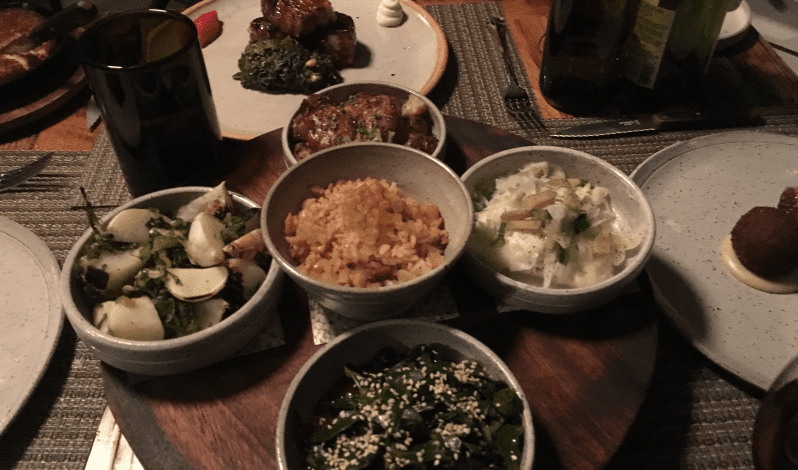 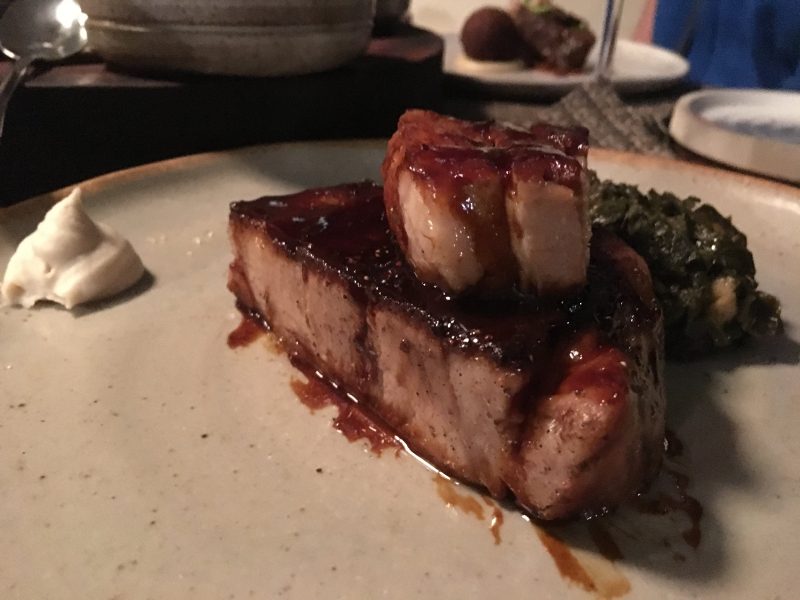 After my pork I never wanted to eat again, in fact, I got most of it boxed up with some dream of eating it for breakfast – but really I didn't even want to think about food for another 12 to 18 hours. It was extremely good though and so, so, so rich. 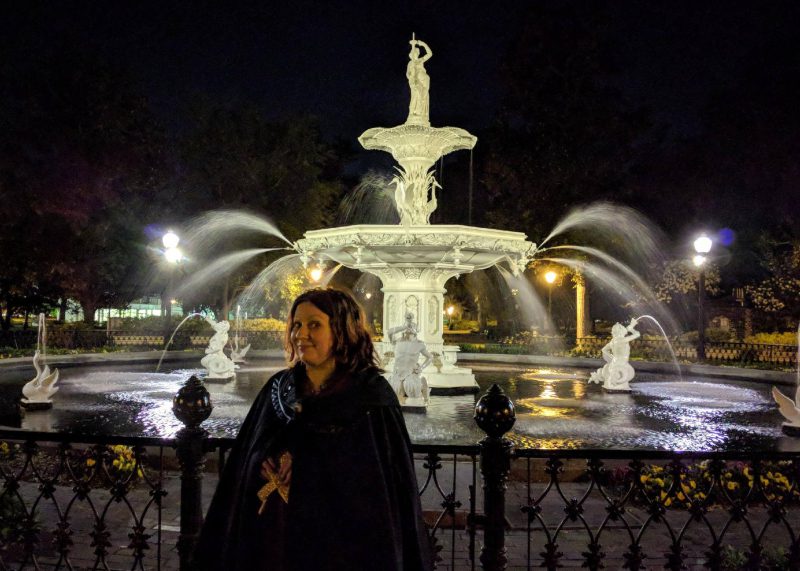 On our way back home we overshot our square and ended up in Forsyth Park standing in front of its famous fountain. I took a bunch of blurry photos of it, obvious overcome by lard, calories and red wine – so luckily Jeremy captured this one. It was a great start to our Savannah adventure.