After a phenomenal breakfast prepared by our Airbnb host in Cottonwood we loaded ourselves back into the truck and headed for Sedona, Arizona. 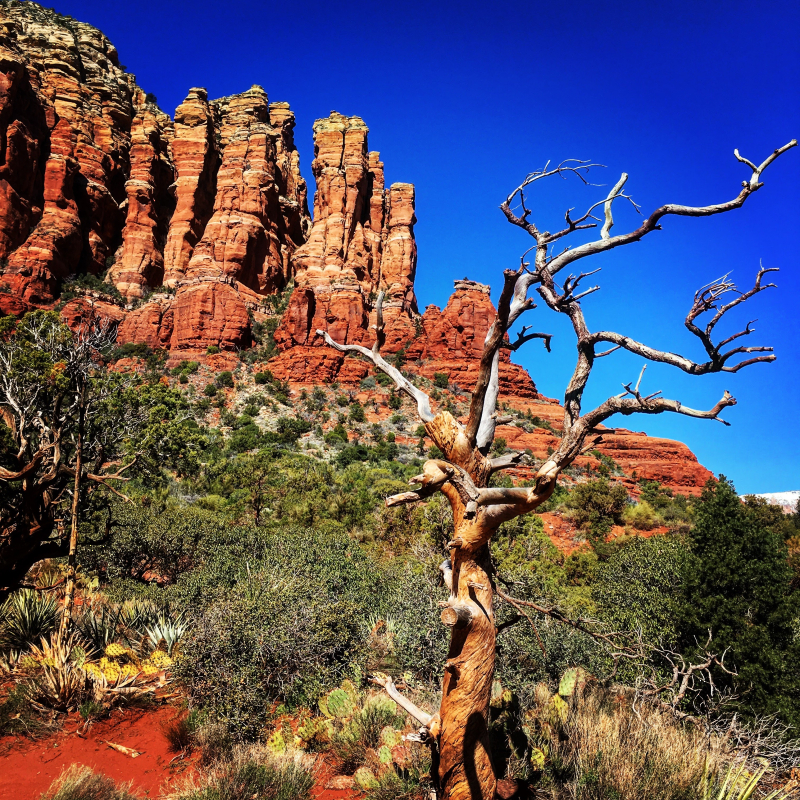 We had a morning appointment with the heralded and number one activity for tourists in Sedona – the Pink Jeep Tour. 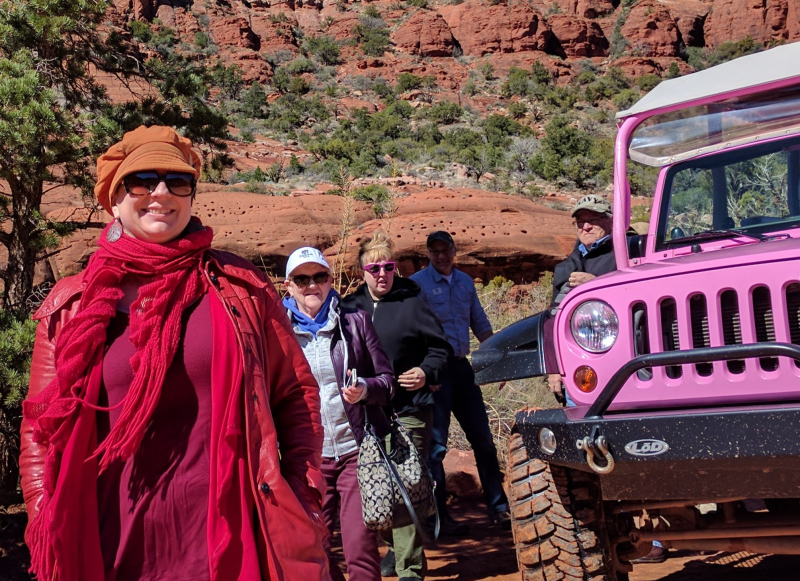 We got to Sedona an hour early for our tour – because that is how we are – so we tooled around the tourist part of town for a little bit to pass the time. 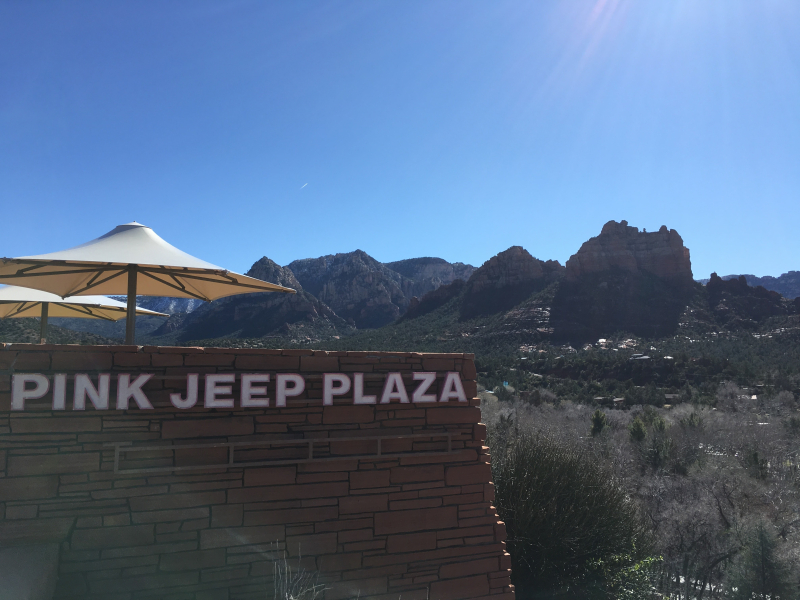 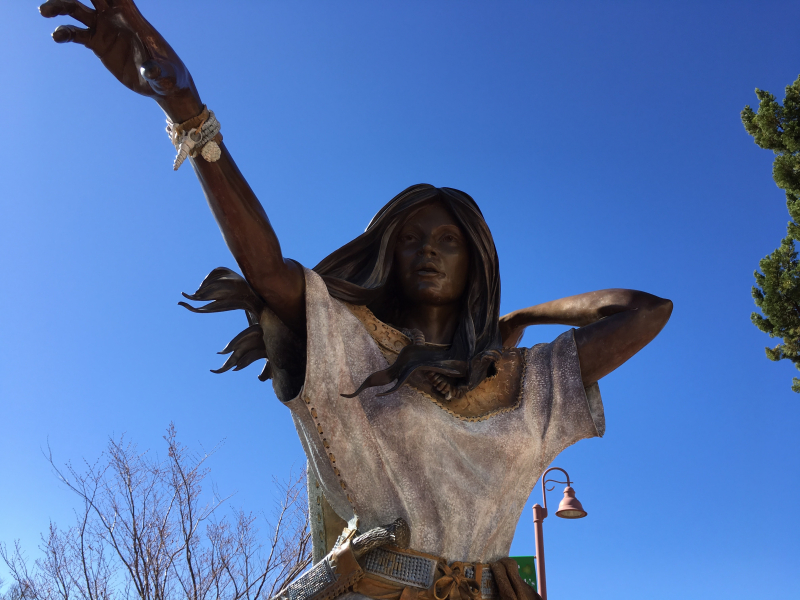 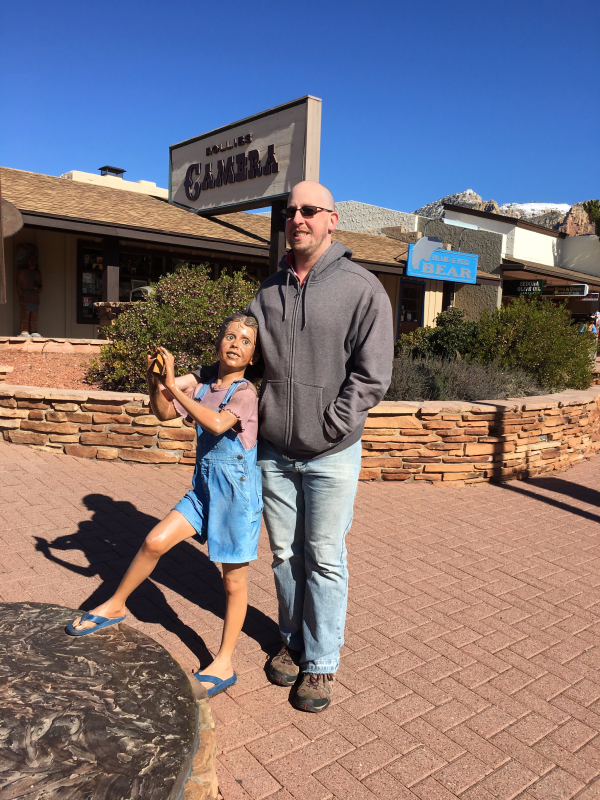 The strip in Sedona was not as bad as Gatlinburg (as our jeep driver referred to it) but it wasn't really any better. There were statues and crystal/rock shops, and T-shirt shops and fudge shops and shops about shops. There were Native American statues and creepy little girl statues and so many aggressively decorated javelina statues everywhere. 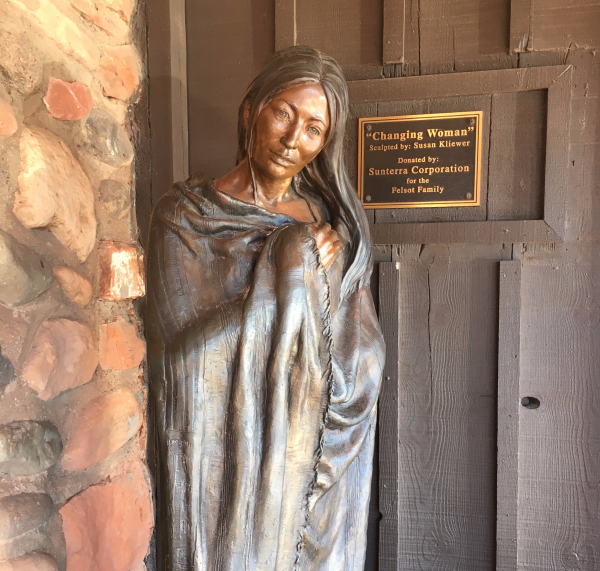 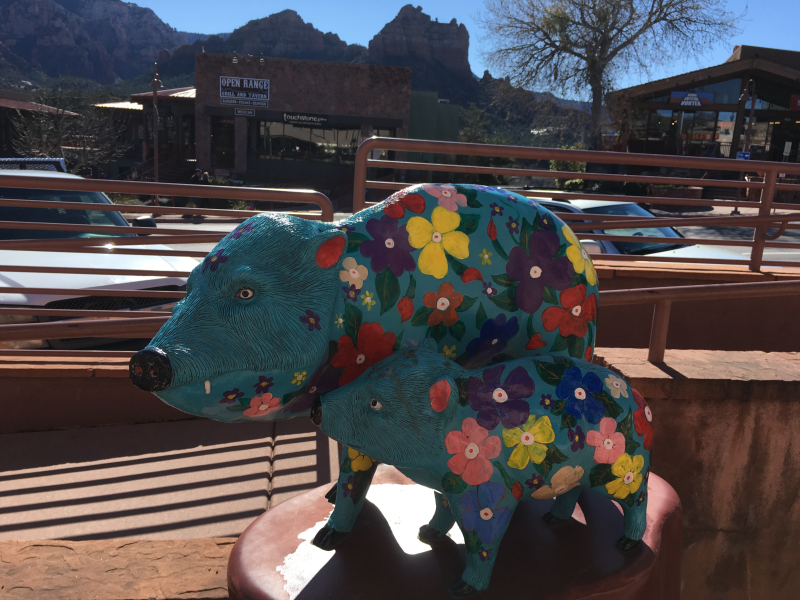 But we only had a short wait until our Pink Jeep Broken Arrow tour so sadly were only able to go into one crystal shop and count about five different versions of the javelina statues. 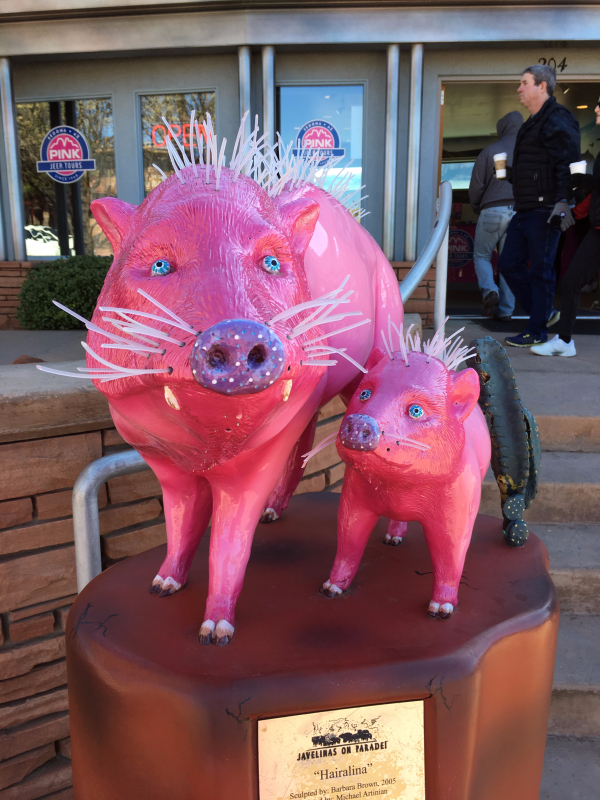 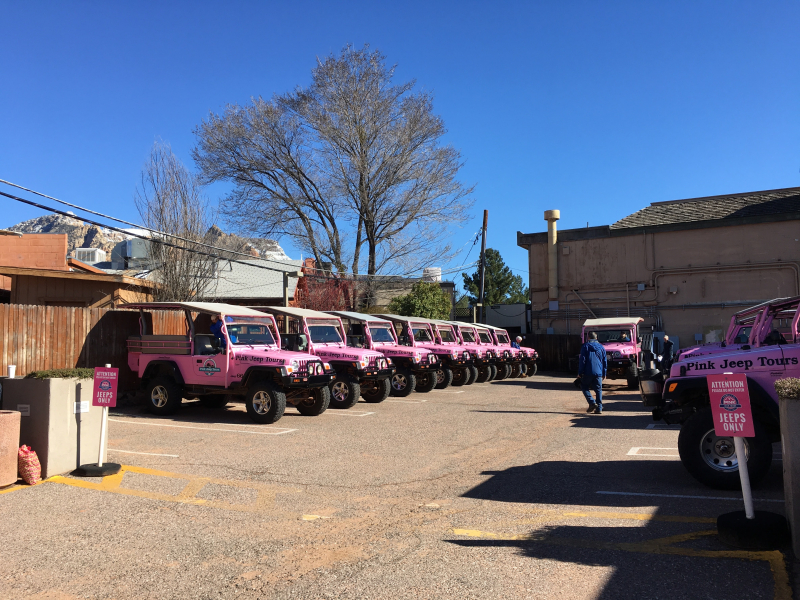 We lined up for our tour and waited for our driver and tour guide to pick us up in the signature tricked out pink jeep. Our driver Josh appeared very shortly and informed us that we would have a couple other people joining us in our jeep – Irene and her husband who we didn't get to know as well because he was in the front seat. 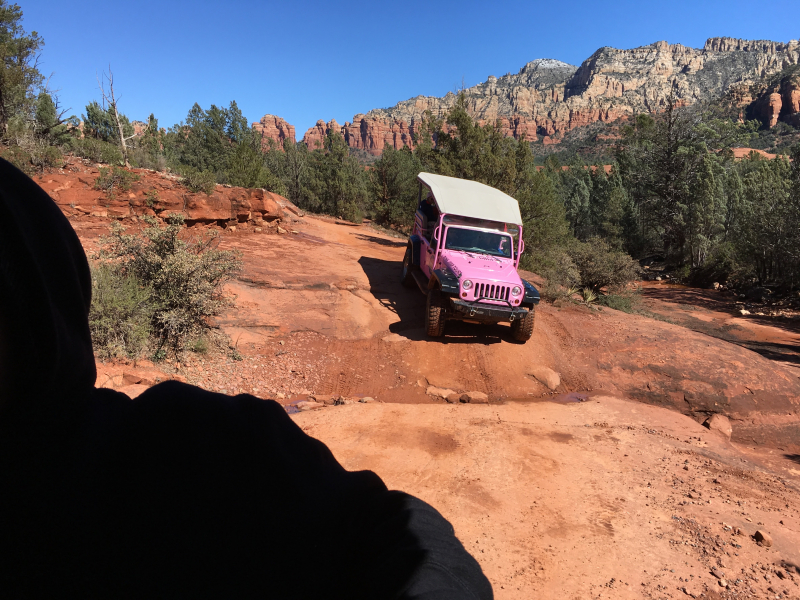 Soon we were driving up and over large rocks and terrain on a public park trail in a portion of the Red Rocks named after a Jimmy Stewart western – Broken Arrow.  Josh our driver told us all about the training procedure for drivers, how long he had been doing this, and which big rocks we would soon be driving up to.  Irene was a hoot as she exclaimed her delight and dismay in a very Minnesota way – which we all appreciated. 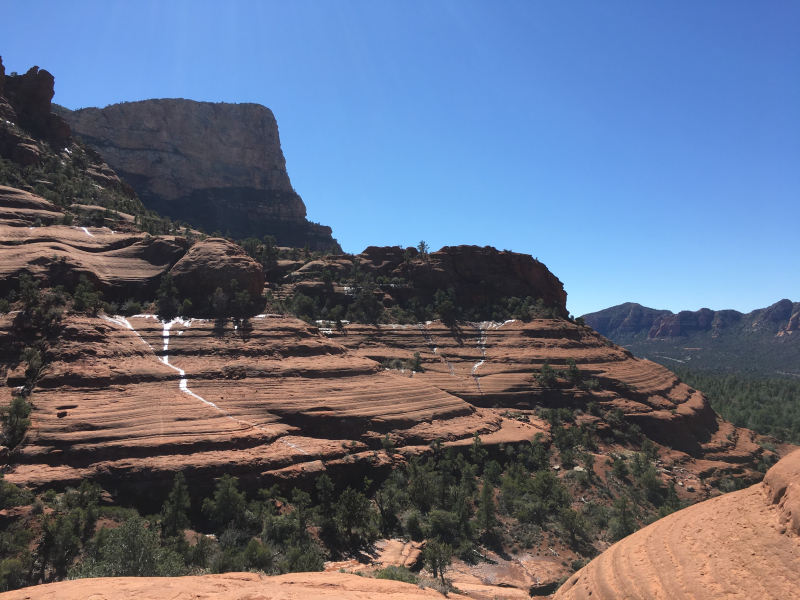 The views were spectacular and the "rusted sandstone" rocks were so red – just like my outfit. 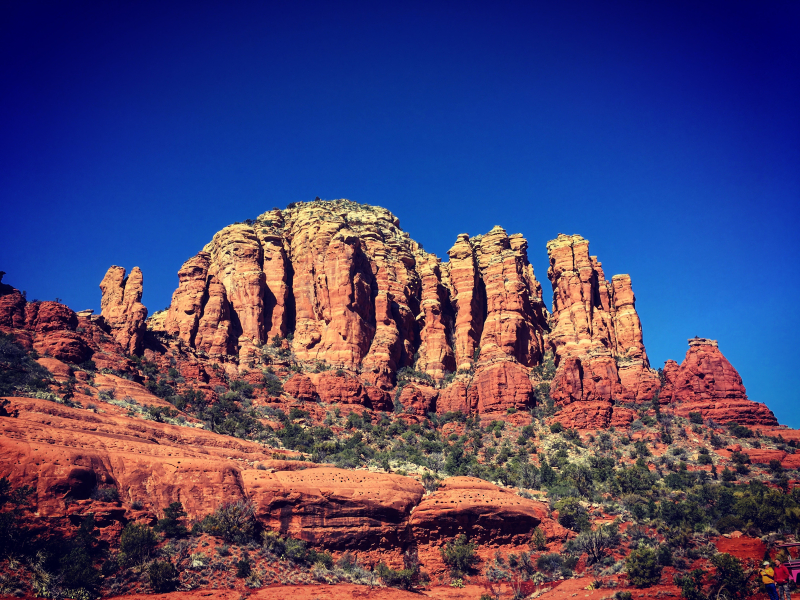 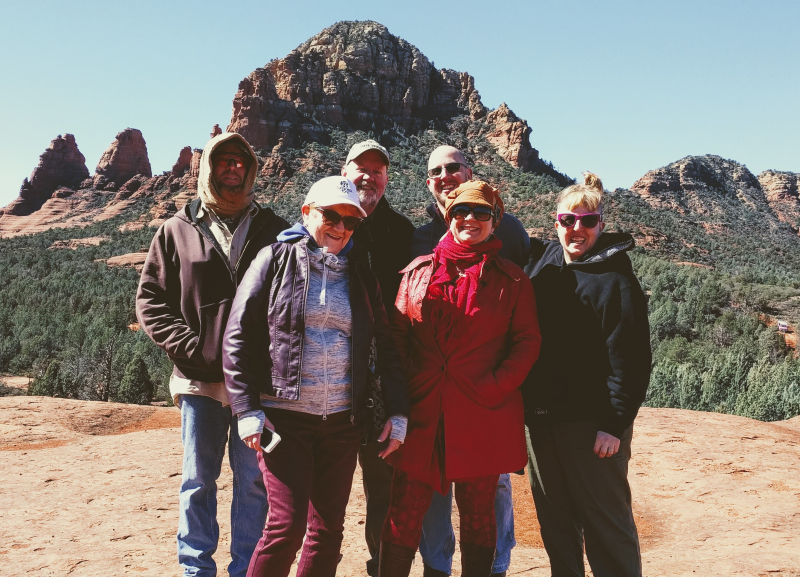 Here is Irene with us in our group photo. Very soon thereafter we were driving along the edge of this crazy rock like you see this jeep behind us doing. 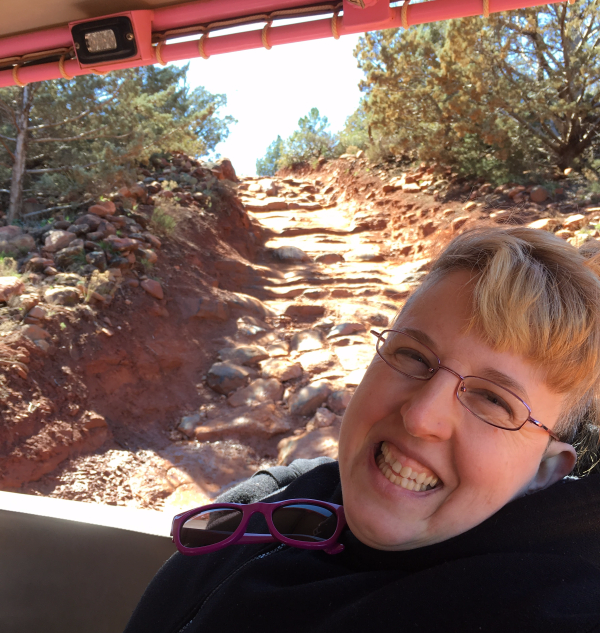 And going down this crazy stairway of rocks with a smile on our faces. 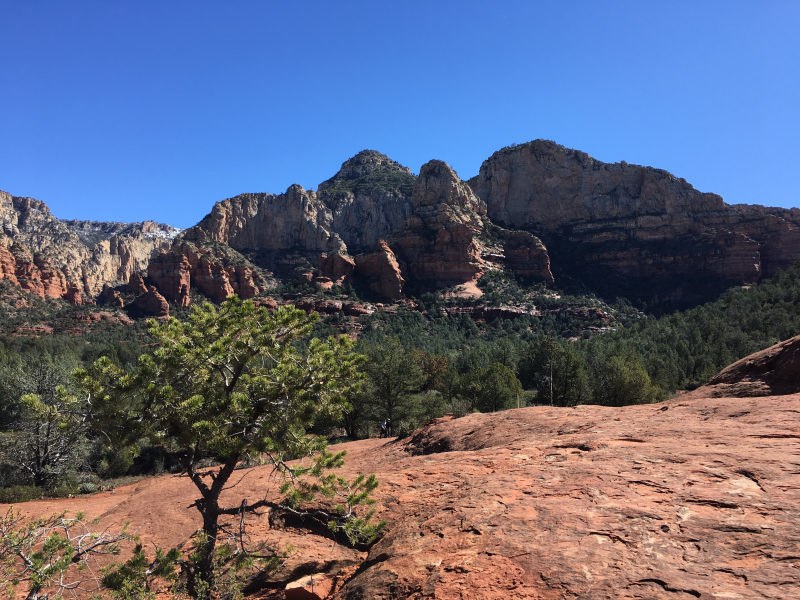 After our fun filled adventure through the red rocks we were very cold. If you could tell from our attire it was not warm on this fine first day of March – it was a high desert 40ish degress. It was time for some hot food before attempting to find the energy vortexes of Sedona. We opted for Thai food for the sake of hot tea and Tom Yum Soup. Nom nom nom. Warm and fed it was time to pile into the truck and look for some spiritual energy vortexes.  We had the chamber of commerce map and the one I printed off the internet after my extensive research. There are four officially recognized vortexes in Sedona each named after something they are near because they themselves are not physical things that can be proven to exist. I was excited and curious – as these vortexes are the reason that Sedona became a thing for the New Age community, celebrity psychics and thus the world in the 1980s and 1990s. This is an example of what one might look like, if we were able to get to one. Instead at each of the four recognized sites there were gigantic clusters of tourists spilling out of the officially recognized safe parking off and along the highway.  With no place even to pullover none of us could get out to go see if we could feel the energy.  We were officially tourist car blocked. It was a bit frustrating and ironic, as its off-season and all. As the tension in the car began to rise after each failure to find a place to pullover near the vortex sites I explained with a very calm voice that the vortex energy amplifies whatever energy you are feeling – so they must be working, as we were all feeling so frustrated. 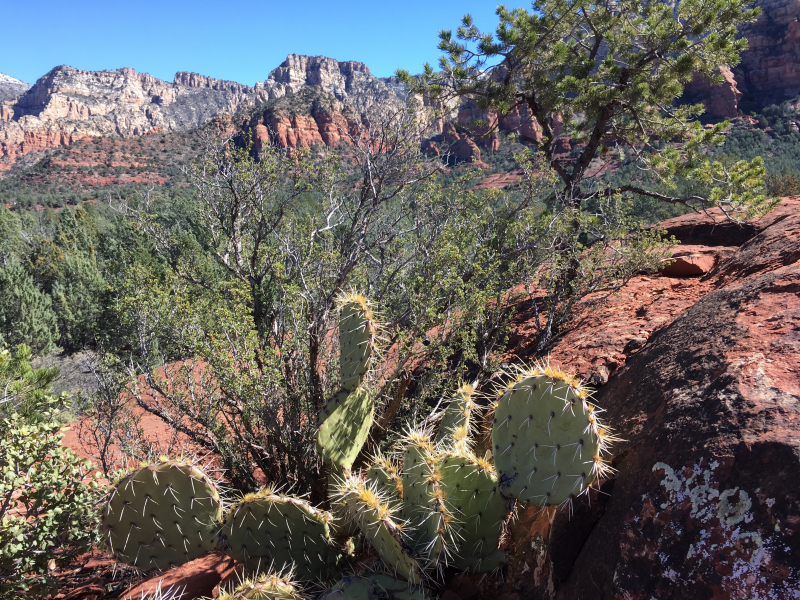 We abandoned the vortexes and decided it was time to check in to the Airbnb, take a little downtime and update the mobile devices in the available wifi. We also had to get ready for dinner at Elote in a few hours. 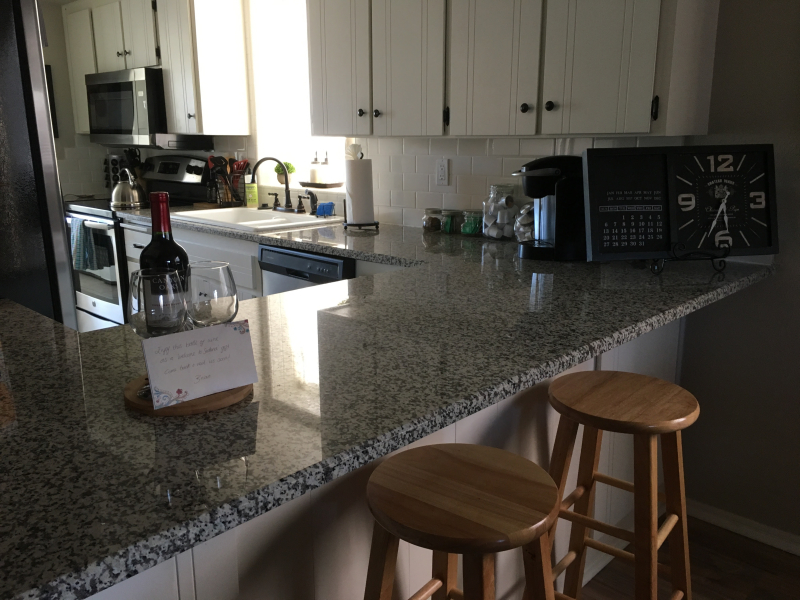 Our Airbnb host left us a lovely bottle of wine to enjoy, but all we wanted was the wifi after going over 24 hours without access to the internet – our phones, computers and my blog were crying for attention.  We immediately clogged the signal as all of our google photos started backing up and syncing and doing whatever they do. Meanwhile, we investigated the Uber, Lyft, cab situation to get to dinner. Cab service it was as there were only two Ubers in all of Sedona, none of which could carry five persons. 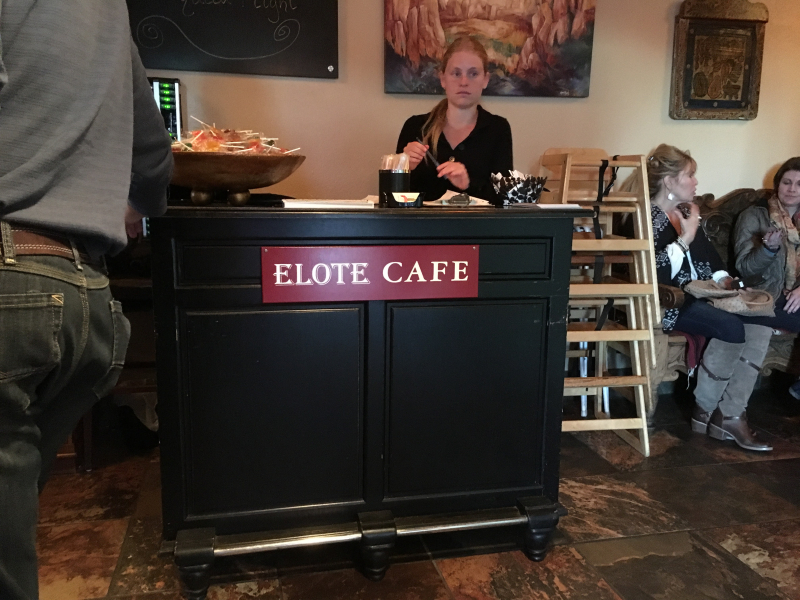 Elote is a Mexican Southwest American cuisine restaurant. When we said we were going to Elote in the Sedona and Jerome/Cottonwood area everyone replied "oooo! you are in for a treat!" then followed said excitement by "also a wait, they do not take reservations" which we knew and were fine with.  We got to sample a plethora of margaritas and house brewed mezcal while we waited. 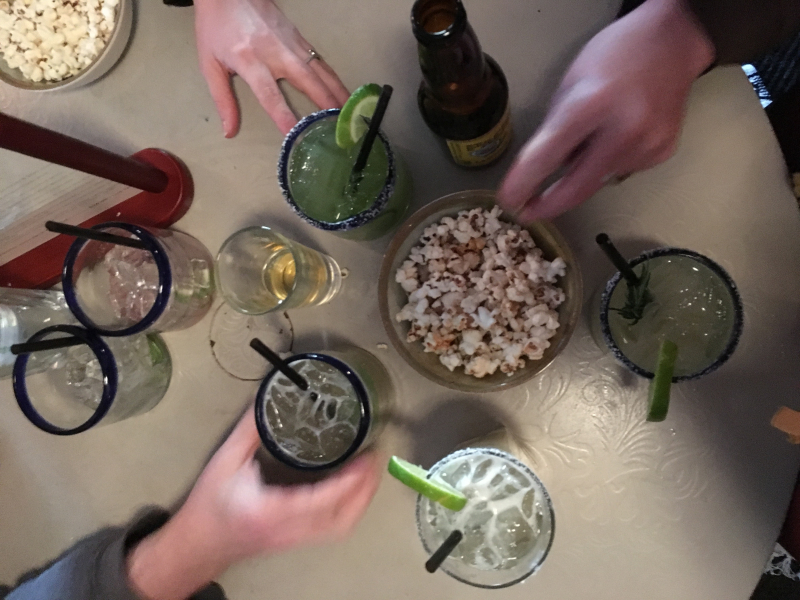 I chose a ginger rosemary margarita and it was yummy, not too sweet perfectly balanced with the rosemary.  The house made mezcal was small batch (i.e. one barrel) and really really good – you could taste the bourbon barrel aging process. Upon being sat at our table a little over an hour after our arrival, we immediately ordered the bean dip (seen above). It was delicious and we ate way too many chips. But were not to be prevented from ordering our dishes. 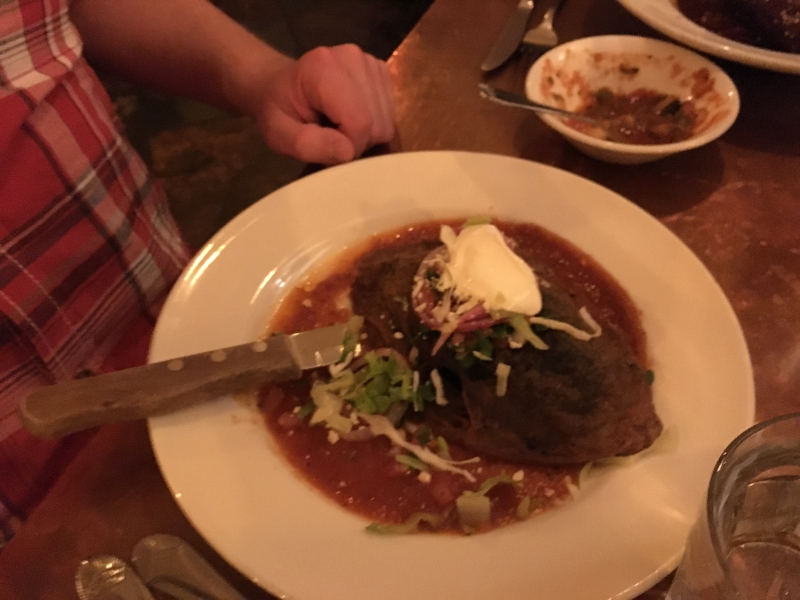 Chili rellenos stuffed with sweet potatoes and not doused in cheese, 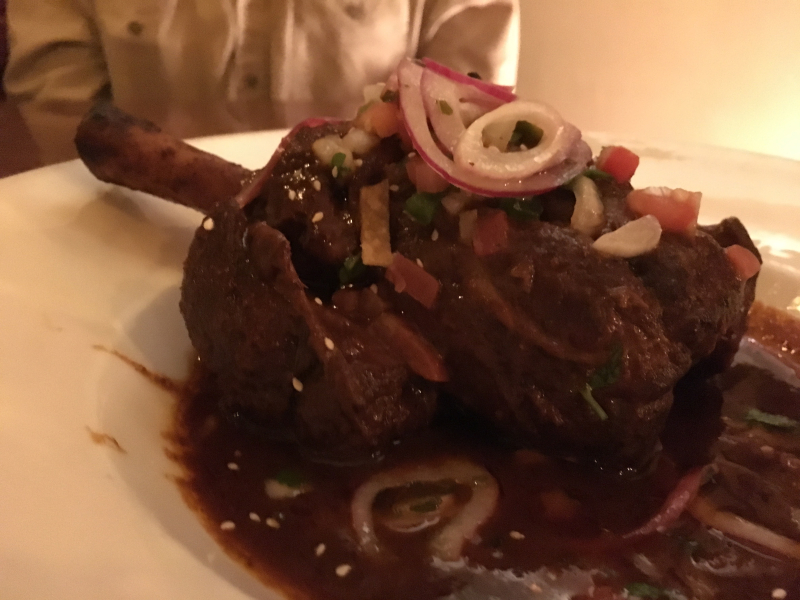 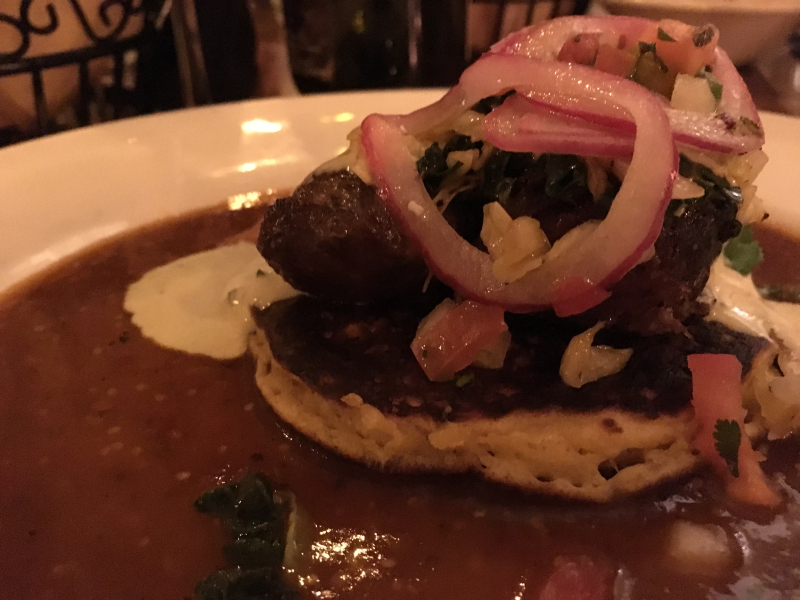 smoked pork cheeks over a corn cake with cascabel chili sauce and cumin drizzle. This was my dish – as tempting as the other items on the menu were I could not turn away from these potential flavors. I was not disappointed in its rich smokey pepper flavor with just a dance of cumin on the tongue and sweet corn. Officially the best food of the trip so far (with the exception of Shell's home cooked food at the Airbnb) and it made everyone giddy from the flavor. So giddy that we had to order dessert to go and upon return to the Airbnb, everyone, including me after a sad attempt to complete my blog about wine tasting in Jerome proceeded to pass out full and happy.