I had no idea when I awoke in Sedona, Arizona on Thursday morning the amount of ground we would cover that day. I thought we were going to Flagstaff for the day to do whatever it is you do in Flagstaff. Instead, we covered many many many miles and tourist attractions along old Route 66. 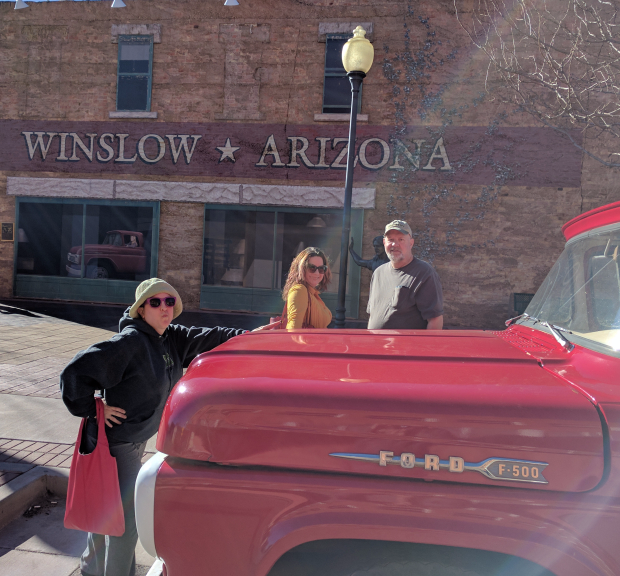 After cleaning up the Airbnb, eating a breakfast of Elote dessert, and packing up the truck we were on the road again to Flagstaff. The road to Flagstaff is a mountainous canyon filled with snow and curvy narrow highway. We changed elevation significantly and finally arrived in Flagstaff and turned onto old Route 66 just in time for Satchmo's to open for lunch. Satchmo's BBQ is a little local gem featuring cajun/creole cuisine in the center of Flagstaff. 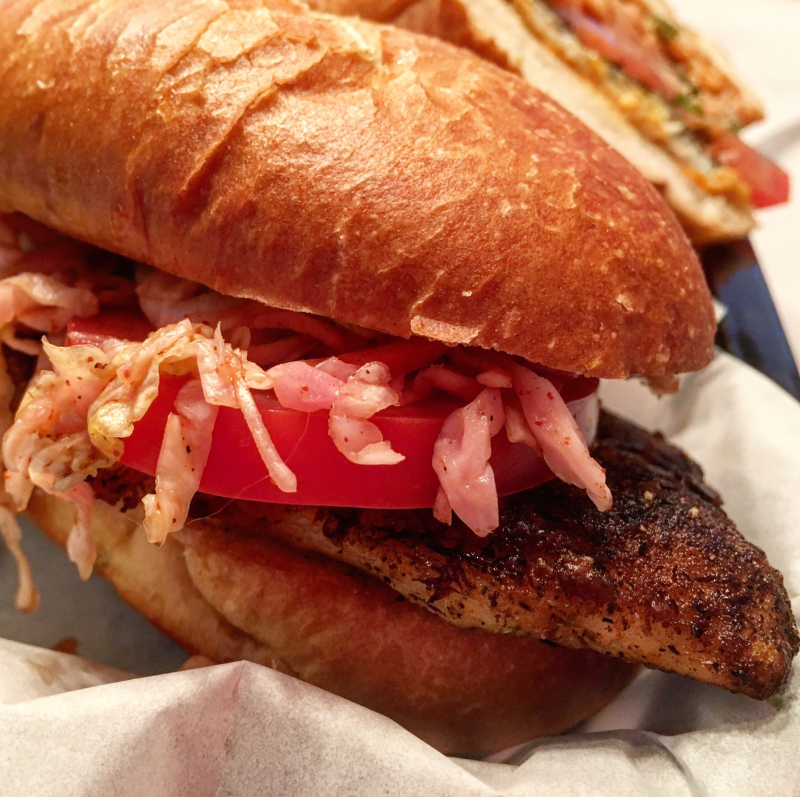 After much inner debate I went with the blackened catfish Po'Boy so that I could sample the catfish, the cajun mayo, the cole slaw and get a side of beans and rice. More food than I needed but more options to be sampled – none of which were eaten with any form of regret. We also, as a group, got the Tot-cho's – tater tot nachos, oh yeah – cheesy potato-ey goodness on a plate for the Minnesotans. 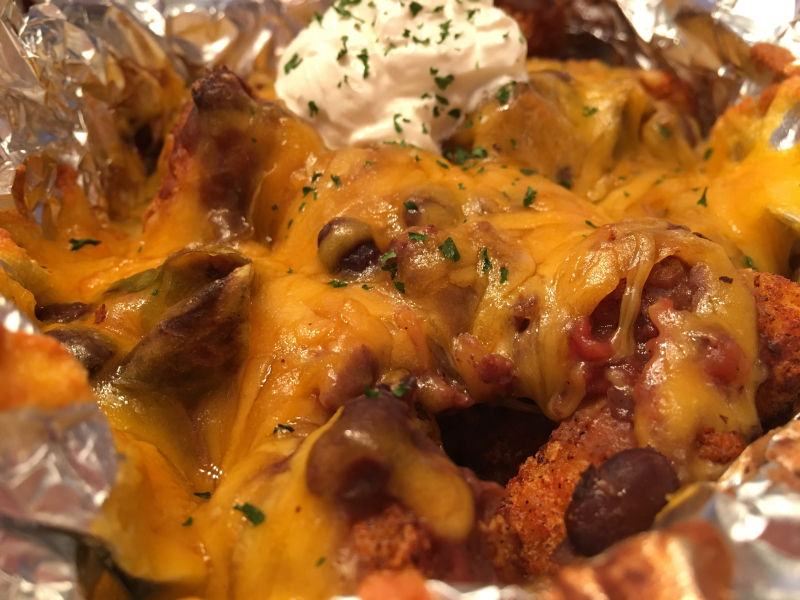 After lunch we were fueled for the Northern Arizona History Museum to visit a piece of the meteor that made meteor crater and learn about the natural history of the Colorado Plateau and the formation of the Grand Canyon. 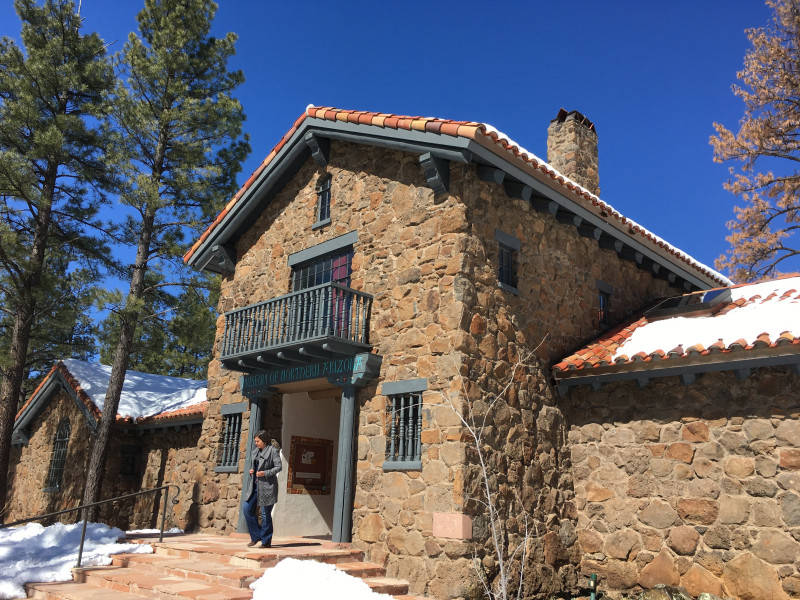 Note the snow on the ground in Flagstaff. 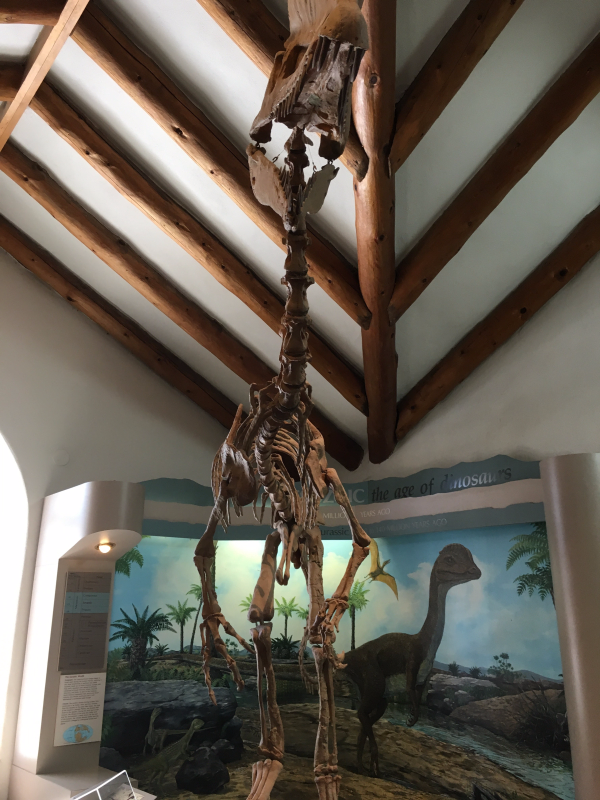 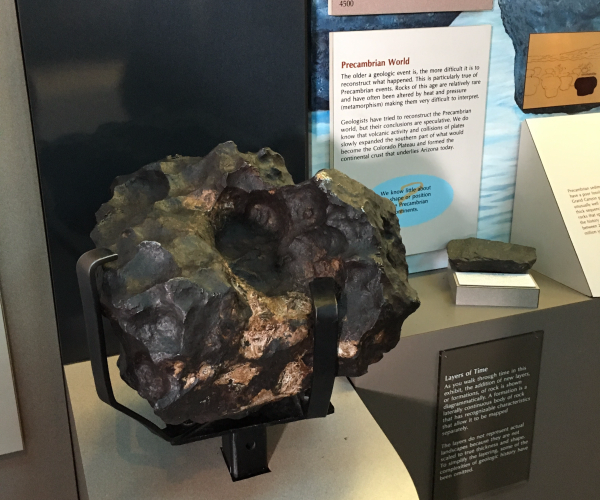 The museum had as much bookstore and gift shop as there was actual content – but they did a good job breaking down the history and archaeology of the region. Above is the chunk of the meteor that allegedly made meteor crater that we will get to in a minute. 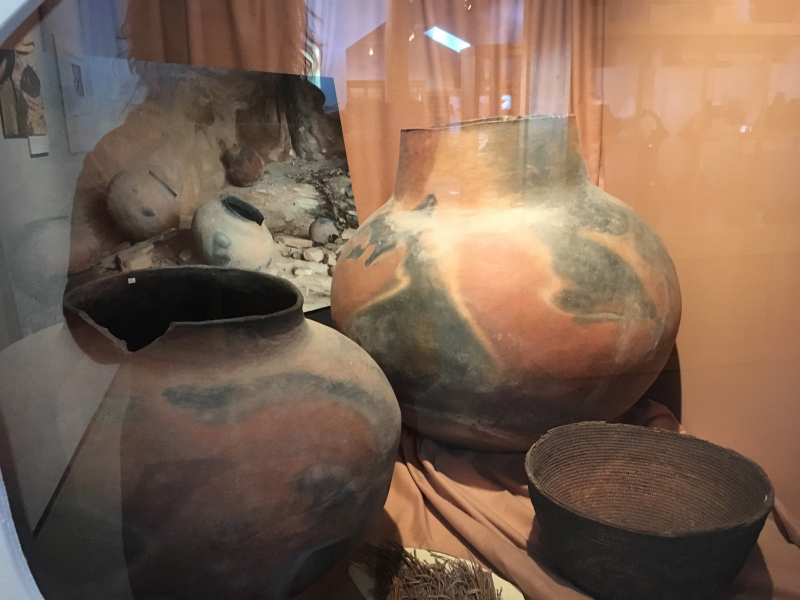 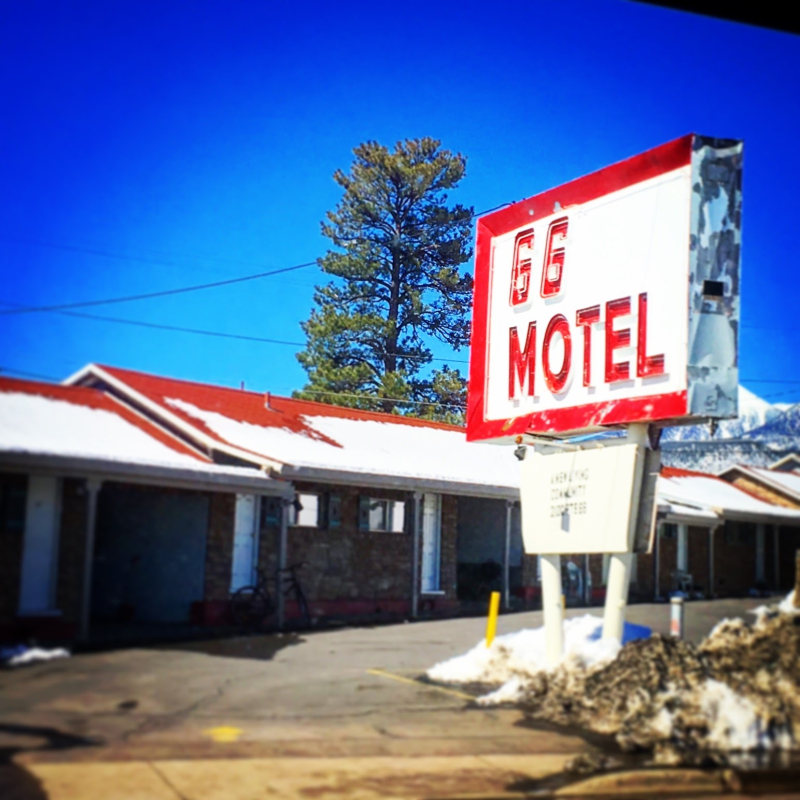 towards the dull flat plain of Arizona that no one really ever talks about because it is so boring. 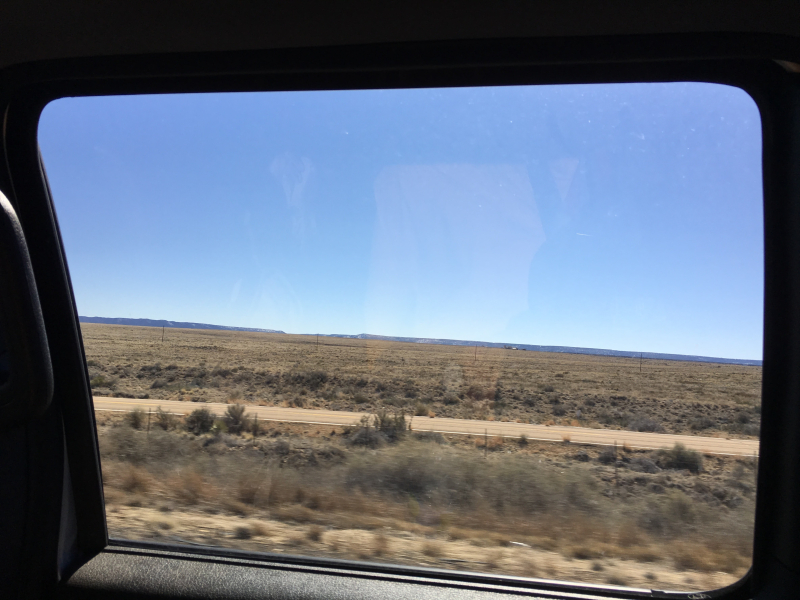 The most interesting parts of the drive are the relics of old Route 66 road side attractions that are now covered in graffiti. We did stop at the major highlights of the drive however – like Meteor Crater. 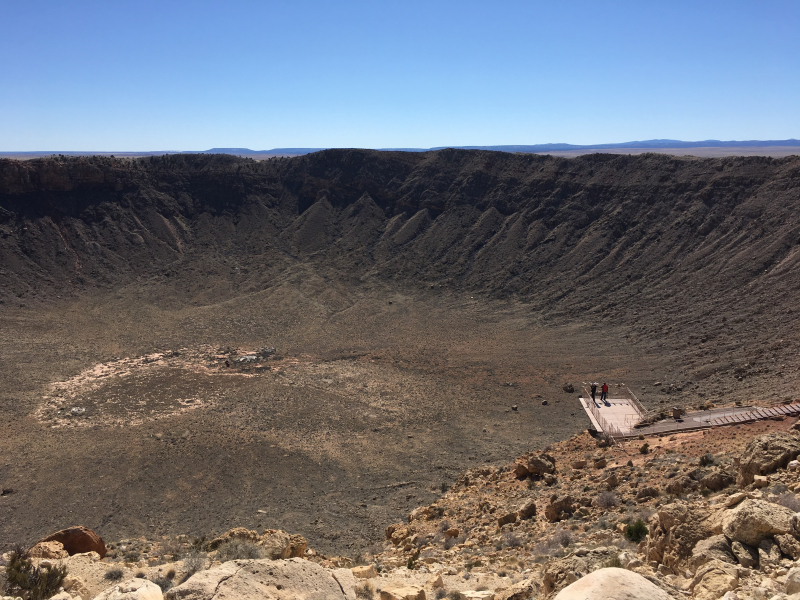 The meteor that caused Meteor Crater was very polite and landed in the middle of absolutely nothing about 50,000 years before humans were even a glimmer in history's eye. Meteor Crater is, according to the very repetitive and almost propoganda-like materials of the museum on-site, the best preserved meteor crater in the world. The land that Meteor Crater is part of was purchased by Daniel Moreau Barringer around 1902. Barringer, convinced that the crater was caused by a meteor (as this was not the common thinking of the time) formed Standard Iron Company and filed four mining claims with the Federal Government to mine the iron ore from the giant meteor that he believed to be under the ground in the crater. Barringer spent the next 26 years attempting to find this iron meteor. 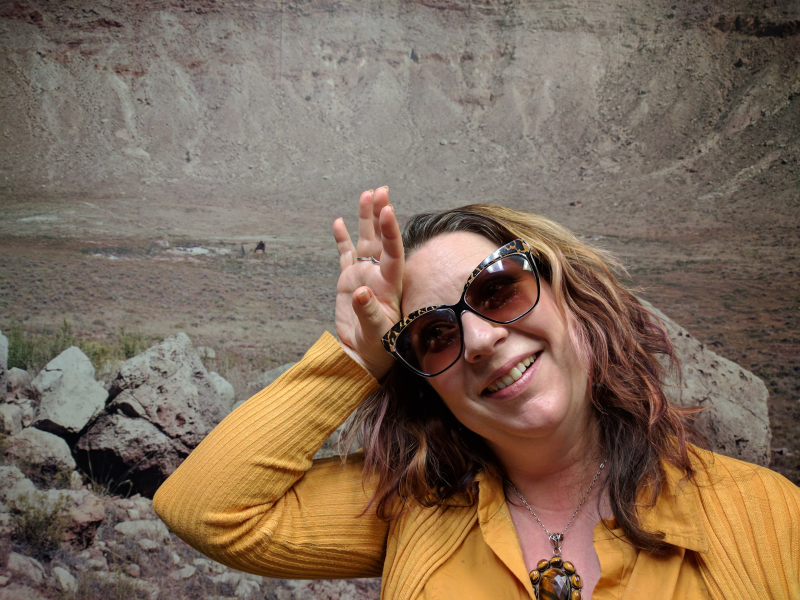 The pamphlet handed to you when you enter the meteor crater facility, aside from including a free Subway cookie coupon, says that Barringer's research was carried out with "great perseverance, and bitter disappointment" as he never found the meteor. 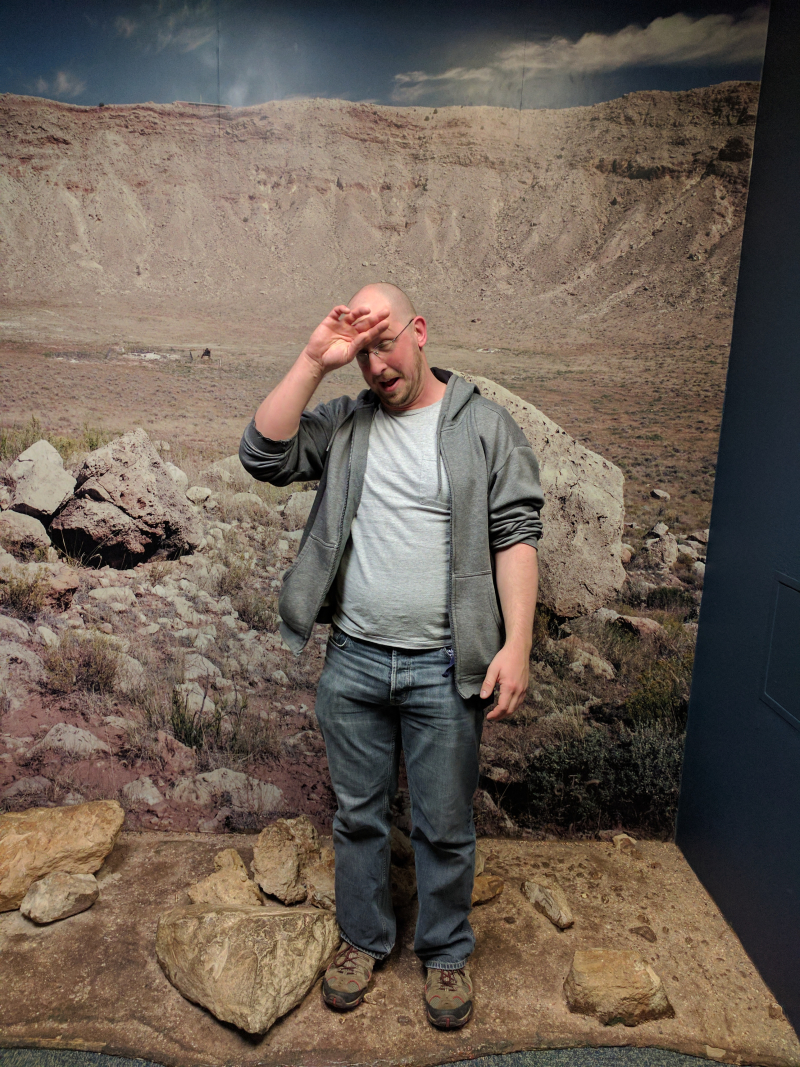 What Barringer did achieve however, was the beginning of the acceptance that all craters were not created by volcanic activity – some craters were created by meteors. This theory however, was not actually scientifically "proven" until the 1950s when nuclear blast scientists who helped with nuclear bomb tests confirmed the trajectory of the crater rock and other details mimicked that of a giant explosion.  For here it was theorized that most of the likely 150 ft across meteor evaporated upon impact. 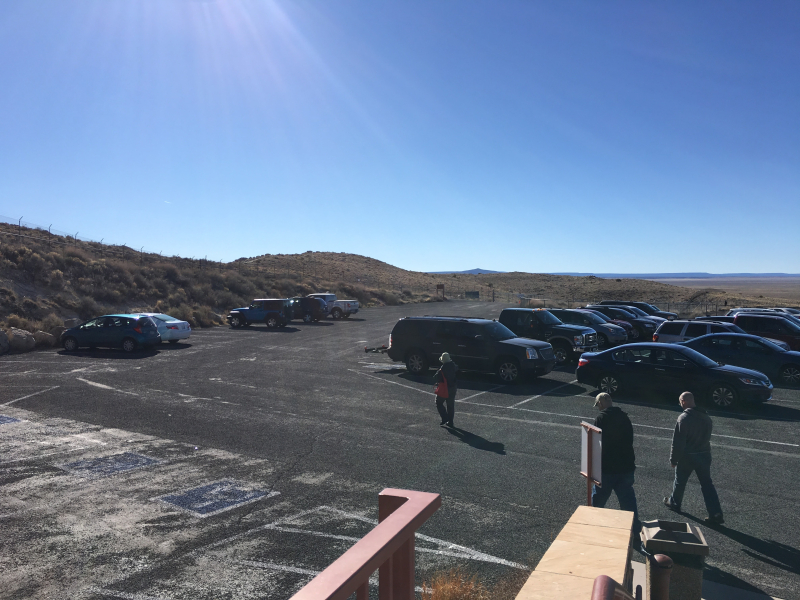 Meteor Crater is still privately owned by an enterprise held by the Barringer company as Meteor Crater Enterprises and they operate the museum visitor center on the site. The crater was used by NASA to train astronauts and has been the location of most geological study informing the science of meteors.  It is however, in the middle of nowhere, so definitely worth a stop on the way to something, but not really a destination location. 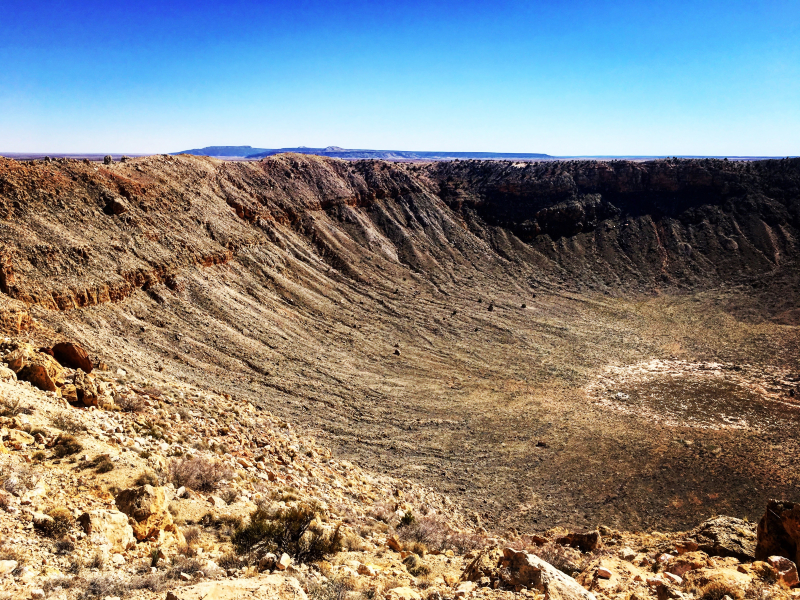 Luckily, we were on Route 66 and my companions had a plan for what to do to break up the drive from Flagstaff to Pinetop-Lakeside, Arizona (our destination). I was clueless, but we were in fact passing right by Winslow, Arizona and in Winslow, Arizona exists Standin' on a Corner Park. 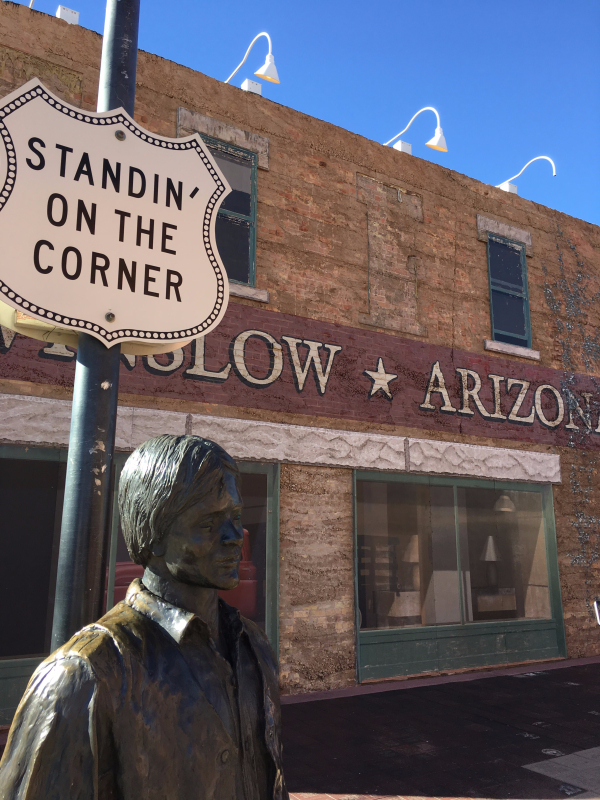 Complete with a red flat bed Ford and a statue of Glenn Frye (we think) – you can see him behind us in this photo below. 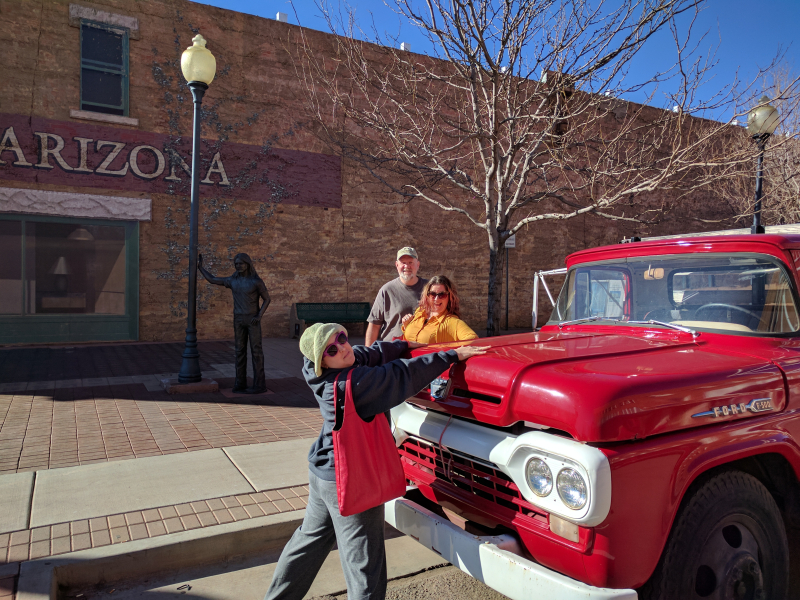 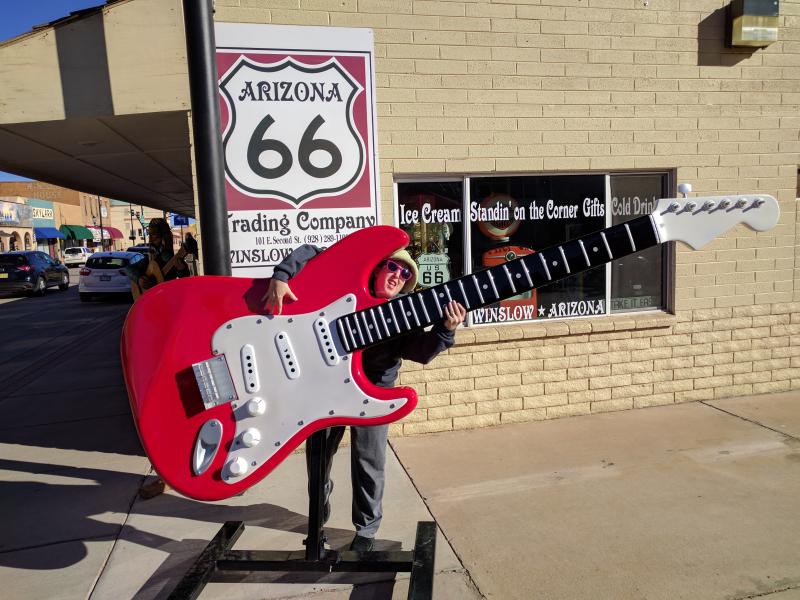 Also available was Standin' on a Corner gift shop and bar, a large guitar and a giant painting of Route 66 in the middle of the road. 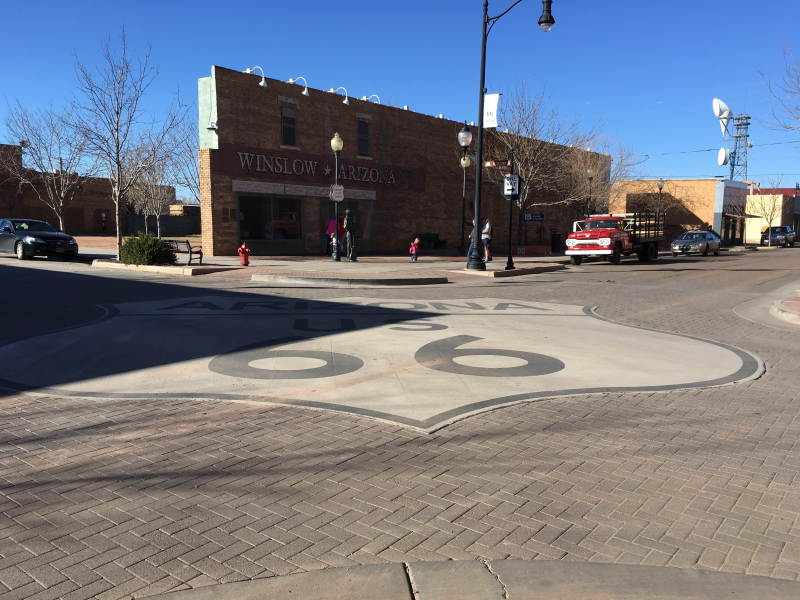 Our whole tourist photo opp took less than ten minutes and we were back in the truck heading through no man's land discussing how in the heck Winslow, Arizona ever even came to be and why Glenn Frye mentioned it in the song he helped Jackson Brown write. According to the Winslow Arizona Chamber of Commerce pamphlet it is "In touch with our past, in tune with our present, on target for the future…" however, it looks pretty economically depressed – and since the die off of passenger train travel it really has nothing else going for it but the park we spent 10 minutes at. 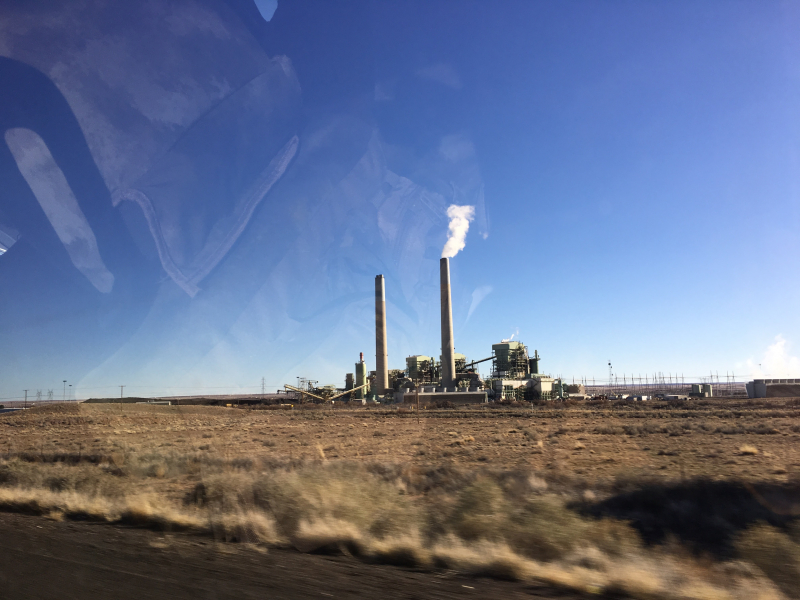 Winslow came into being in 1882 as a railroad city as its location was the easiest place to cross the Colorado River and the major division point to hold the surest supply of water for the steam engines of yesteryear. As of today there is really nothing out there but this power plant, prairie and Geronimo's gift shop selling "real indian crafts." 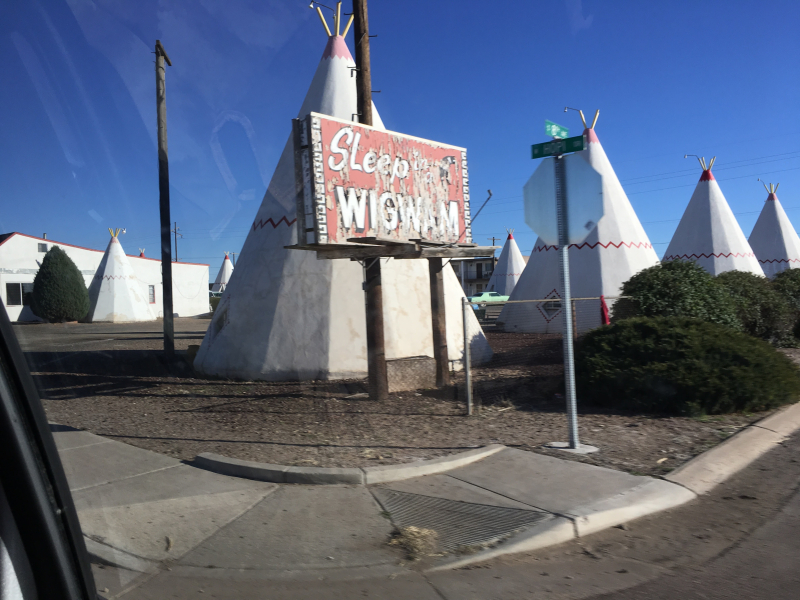 Holbrook, Arizona was our last drive by on the way to Pinetop-Lakeside. Holbrook looks a little stuck in time with the old Route 66 Wigwam motel along the road with other throwbacks from the 1950s. Holbrook is the template upon which the movie Cars was based, and it looks a lot like it. 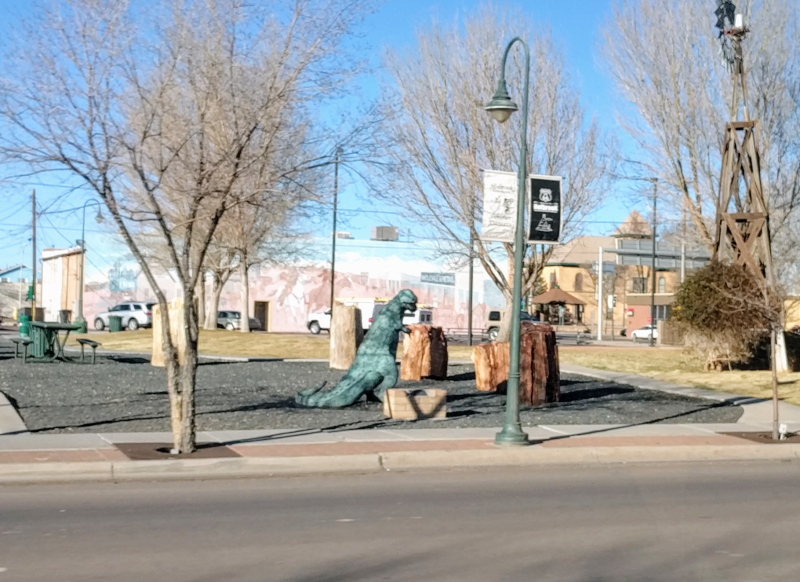 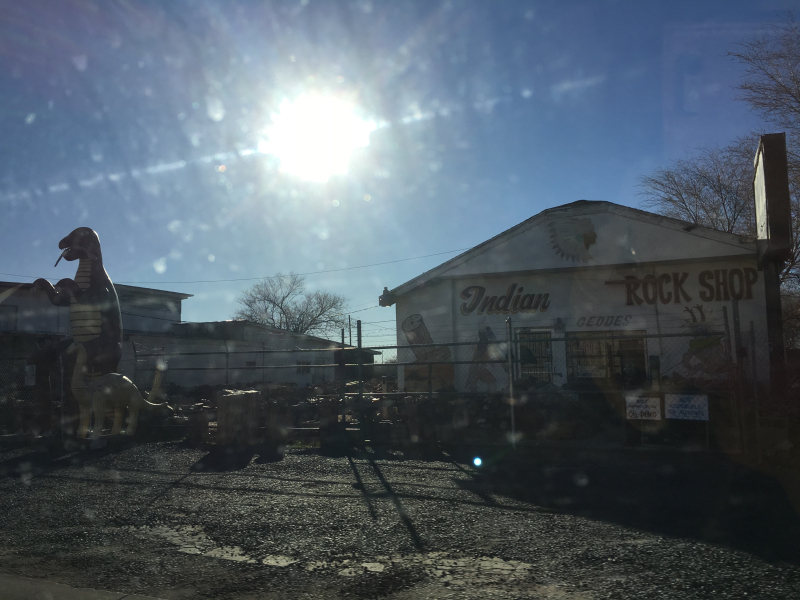 After Holbrook there were just a few more miles until our Route 66 adventure ended at the home of my traveling companions and Arizona locals Jodi & Jeremy at their home in Pinetop-Lakeside.  After a day of riding in the car and road food we were super ready to chill out and eat some salad. 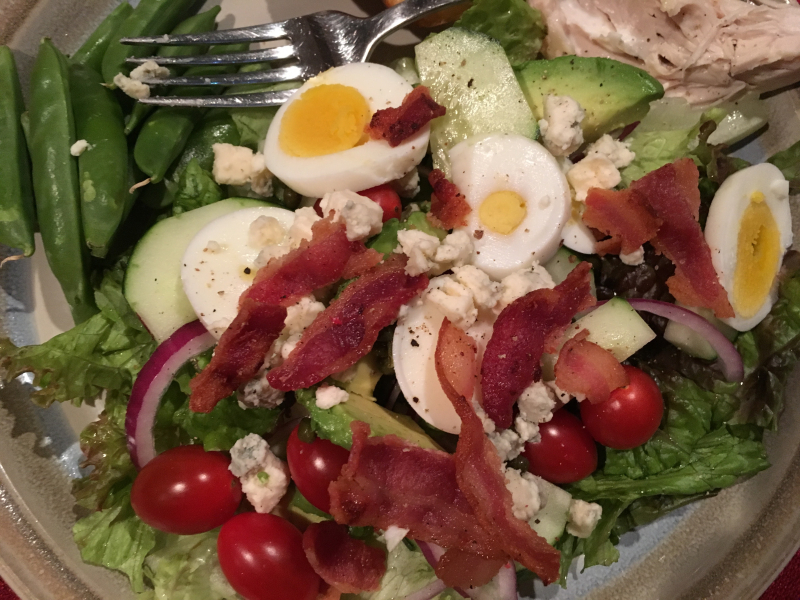