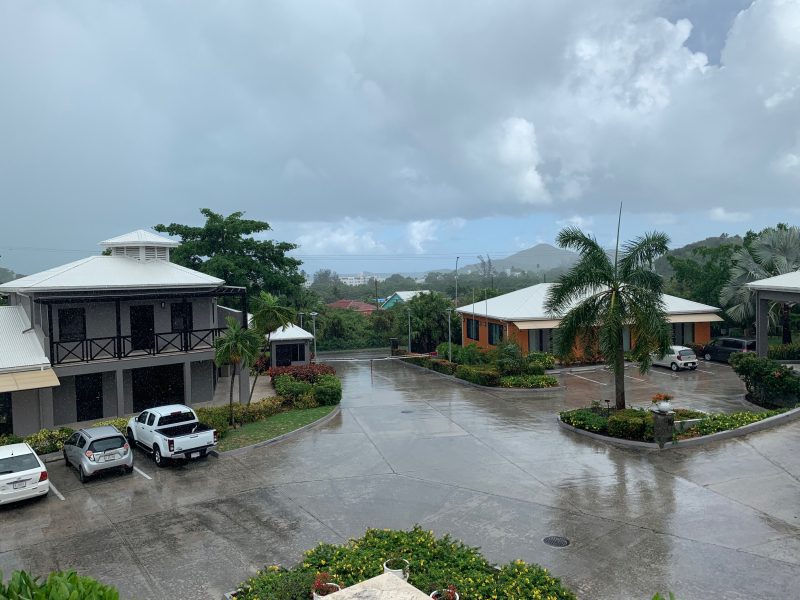 We thought it would only be an hour long hike with a bunch of slow educational rambling about plants along the way – we were so wrong. Almost 3 hours, somewhere between 4 to 6 miles, barely stopping long enough to take a picture, and non-stop story telling and informational downloading later, we returned back to Sugar Ridge, a little more knowledgeable and way more sunburned. 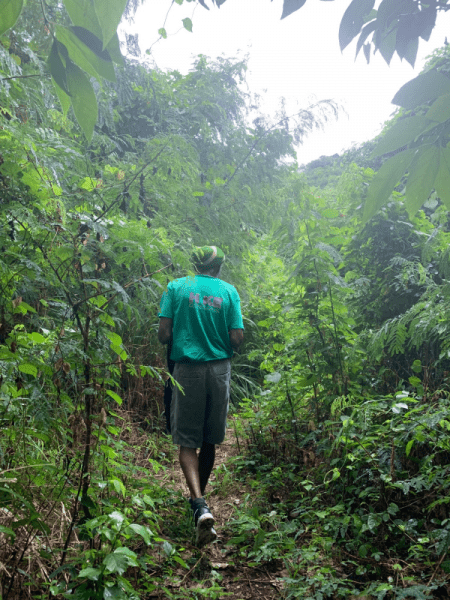 The Thursday morning “nature walk” offered by Sugar Ridge lists the walk as two hours and led by Vorn, voted “biggest character of the island” and renowned plant expert. While chatting with a staff member the day prior he said “Oh, you are going walking with the Rasta Man.” We probably should have known that this was going to be an adventure, and no type of primary school nature hike. But we were surprised by the intensity none-the-less.

Luckily, we started the morning on a full stomach from the resort’s selection of breakfast offerings. And a good sense of what “liquid sunshine” aka rain looks like.  It generally rains a lot in a few minutes then passes over – that is exactly what it did this morning, so our hike wasn’t cancelled. Although, I have the feeling that Vorn would march any tourist willing to go through the bush regardless of a little liquid sunshine. 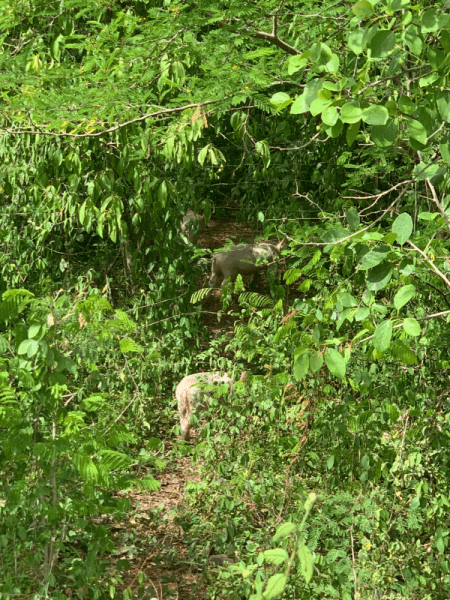 So our walk started out in the parking lot naming plants like citrinella and a couple others and then we moved right into a small cut path that went directly into what felt like the jungle. Vorn was moving fast and talking “You see dis path? I made dis path. Keep up now.” Meanwhile, he was shooting out names of plants like buckshot. There was no way I was going to keep up.

We were many feet behind him right away as the path was rather thin and un-pathlike. I had been slapped in the face by a rather prickly and wet bush that had started to make my eye swell a little bit, so I chose to put my sunglasses down, to stop the next bush from blinding me. But I could barely see. I was also looking down to watch where I was stepping because the path was covered in slowly migrating slimy snails and rocks.  I said “Oh! there are so many snails!” and Vorn replied “Leave dem der! don’t touch em! keep moving we go this way!”

We eventually broke out of the super wet narrow bush path onto another wider, but old looking path.  Vern said “Dis path bin here since we were slaves, my family bin walkin’ dis path for generations.”  That is when he started going into how he was sent to Antigua to stay with his Grandmother as punishment when he was a young boy, and his Grandma was the one who taught him all about plants.  As we were walking and he was telling a story about his grandma charging him rent a little piggy came out onto the path and looked at us then ran back into the forest. Vorn kept walking, uninterested as I paused to take pictures of the piggy and his buddies. 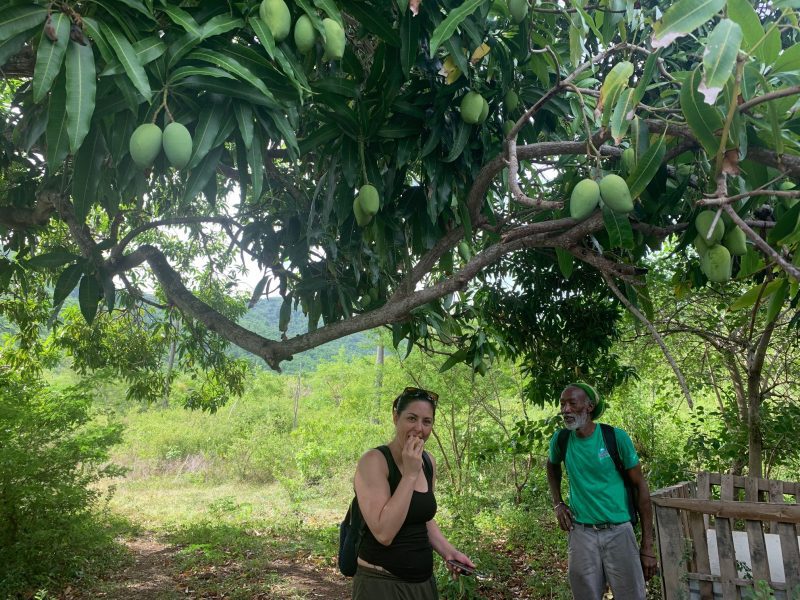 We stopped at a mango tree on the path and he handed one to Natasha and said “Bite down, spit, din eat da fruit.”  She did as he said and successfully got right to the mango. Vorn was impressed “You eat mango like Chinese person!”  he said. “Pass that to your friend over der” he said motioning to me who was busy taking pictures and catching up. 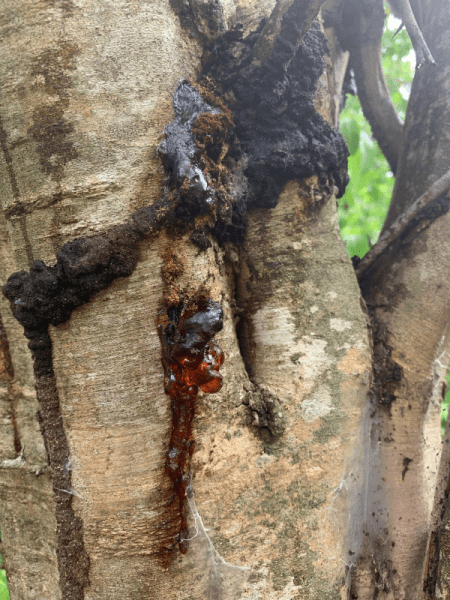 We kept walking until we came to a tree where there was really thick sap come out of it. Like in the picture here. Vorn started singing the lyrics from “No Woman, No Cry.”

and then georgie would make the fire light,
as it was logwood burnin’ through the night

“See here,” he said pointing to the tree and the sap, “Dis here is logwood. It is really hard wood and burns long. Dat what Bob sing about in dat song – then they make cornmeal porridge.”  And he kept walking and singing

no woman, no cry…these feet are my only carriage, so I got to push on through…

Vorn turned to us and said “because the woman wouldn’t stop crying he done left.” Then he bent down to pick up a leave off a little tiny bush on the ground “Crush dis and pass it down.” Natasha did and passed it to me. “Dis is bush tea. I’m going to teach you to fish, because if you teach a man to fish he eats, if you catch a fish he starves. Now you will be able to find dis here plant.” I’m certain I could just live off bush tea in the 100 square miles of wilderness on Antigua. 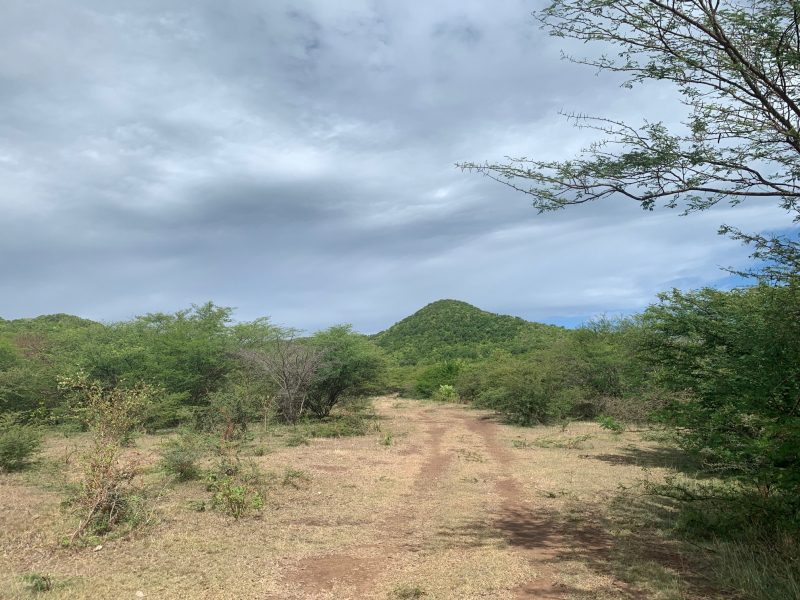 Then we finally busted out of the forest into a big valley clearing between the mountains filled with really pointy bushes everywhere. Vorn said “Be careful, dese poke you – and that pile der is donkey.” Pointing to the dung on the ground. We navigating through the land of pointy bushes, dung and beautiful views until we found ourselves in farmland. 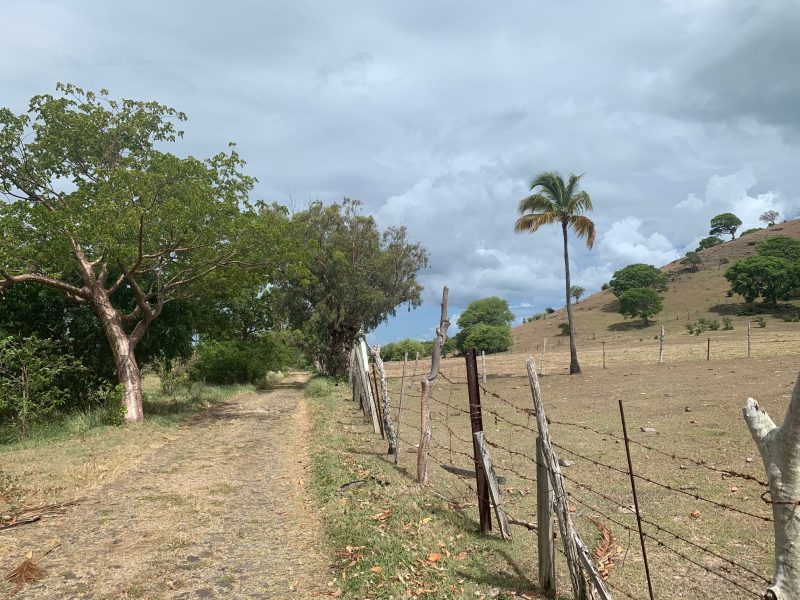 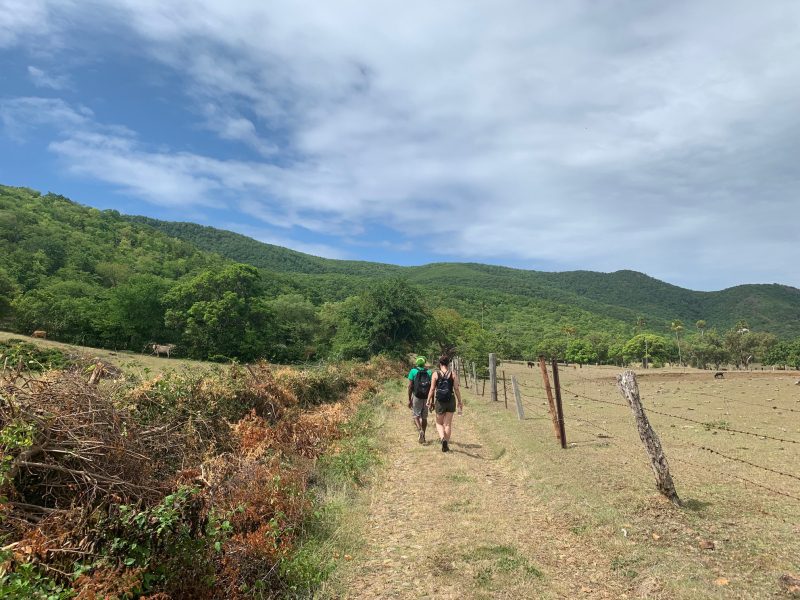 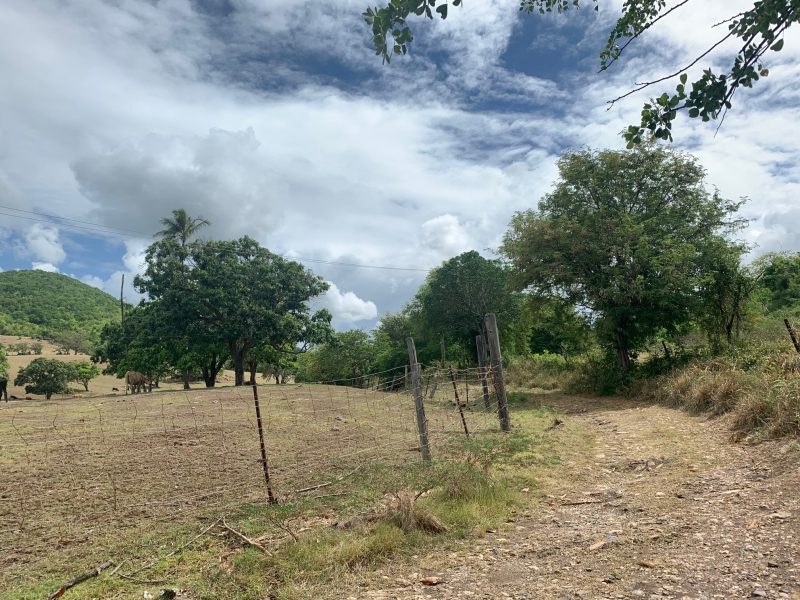 Then the cows started showing up (first I spotted their cow pies). One, unpictured here actually followed us for a while despite Vorn’s attempts to make it go away. The rest of the cows were behind fences or chained to trees. 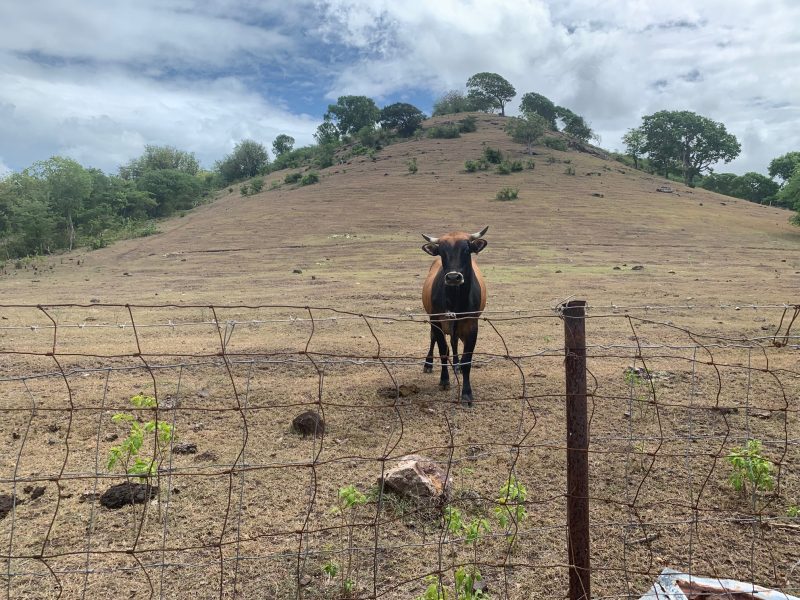 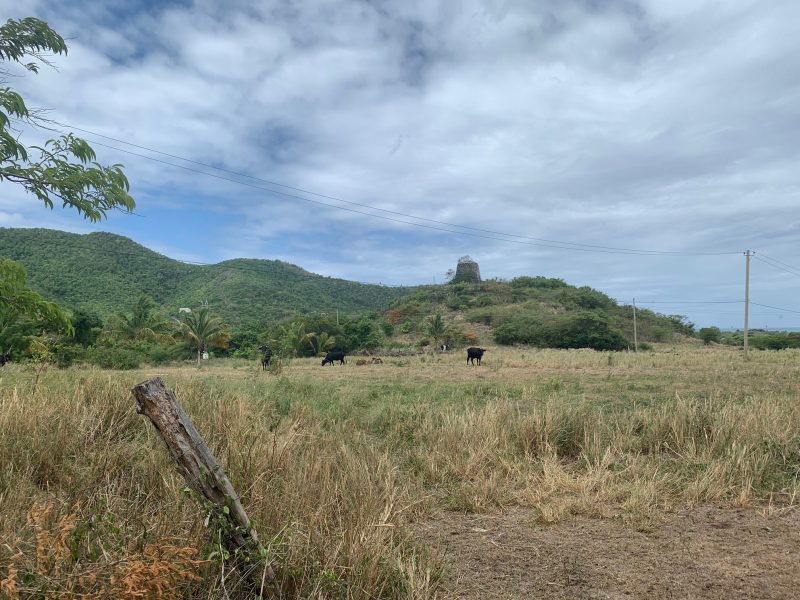 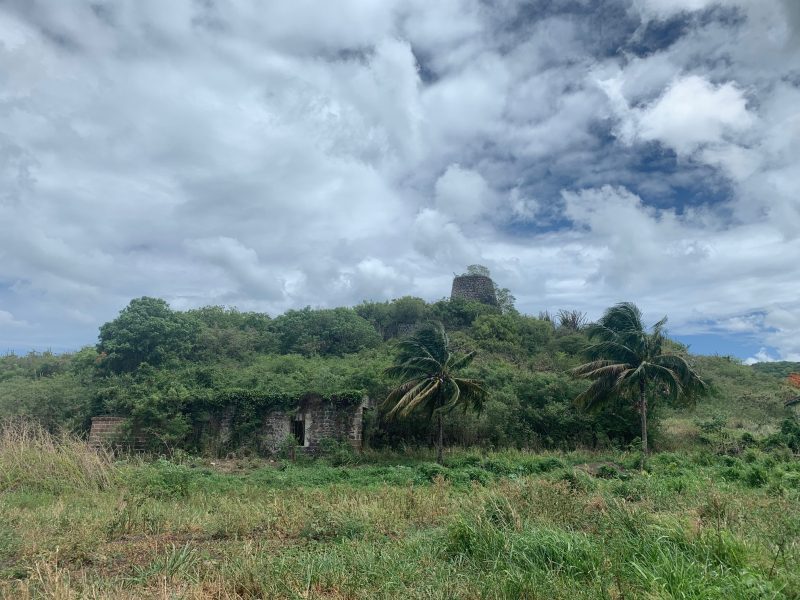 Then in the distance we saw the sugar mill and Vorn declared we were on the hunt for mangos. “Antigua has 50 different type of mango.” He declared as worked on opening a locked fence. The set-up looked like it was something he created for this very walk, but it was a little hard to tell exactly if he wasn’t just breaking into the mango grove for our entertainment. He was also moving into a story about how as a Rasta Man he just lives off the land, eating plants, and how when he went to the doctor with a poisoned hand he was fine because he didn’t have a bit of fat on him. “Doctor said I be a dead man, but I have no fat, so I good. That’s why you keep walkin, you see?” We nodded in agreement. 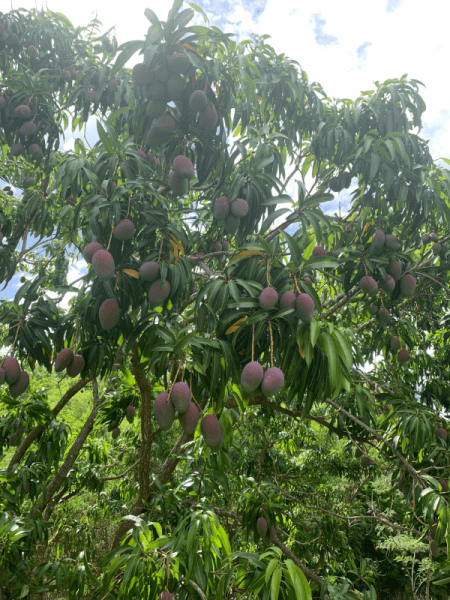 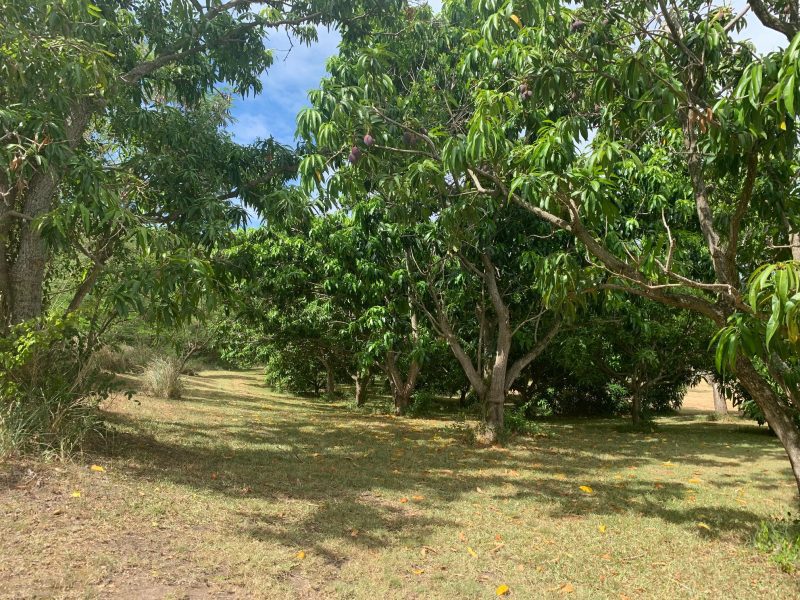 There were no ripe mangos in the grove so we kept walking to find something ripe.  On the way we found a dried/oily coconut that he made Natasha smash on the road until it opened up to reveal its nut. I put it in her backpack to carry for later. 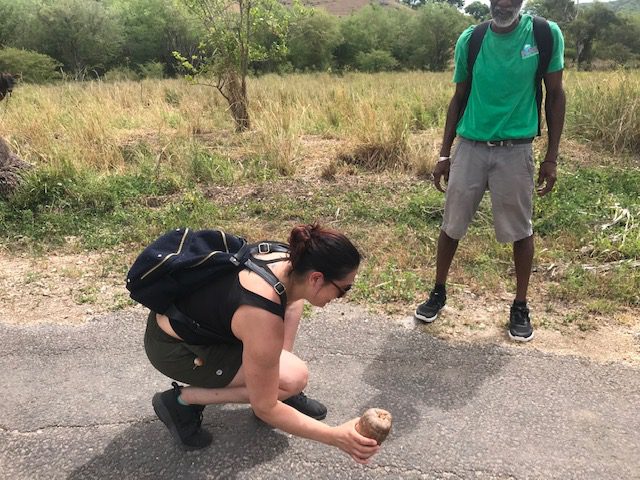 He also found a “water” coconut that he climbed to pull down three coconuts “We drink dis at the end, back at Sugar Ridge.” He said and handed each of us one. 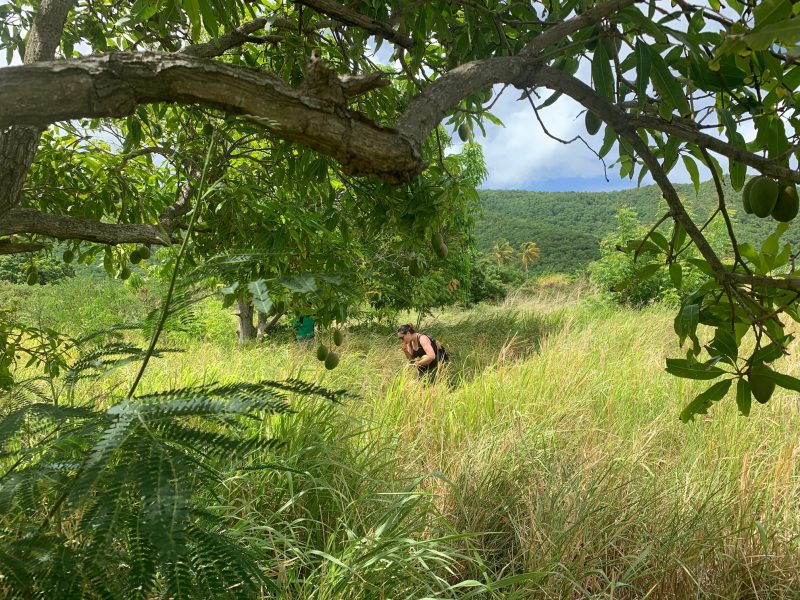 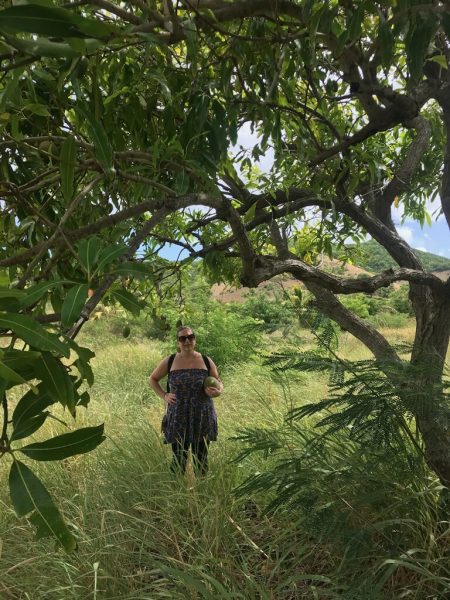 Then he finally found us some ripe mango. Natasha followed him all the way – I stood back in the shade of another tree and held my coconut and took pictures. He picked a bunch and dispersed the among us. I carried mine for a ways then ate it a little later along the way for refreshment getting sticky mango juice all over me. As I tried to wipe it off Vorn was like “No, no don’t ya put that juice on yer dress! Here rub it like dis and it will dry right in. Good for ya skin it tis.” It was just sticky mango all over my arms – I worried briefly I was going to have an allergic reaction but got over it. At this point we started walking out of the wilderness and found ourselves at Coco Beach resort, coming in from the back way. 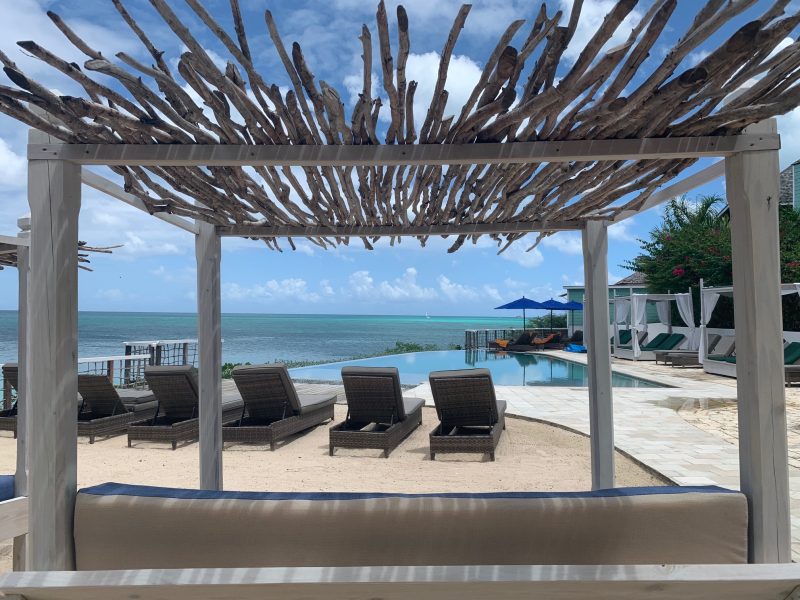 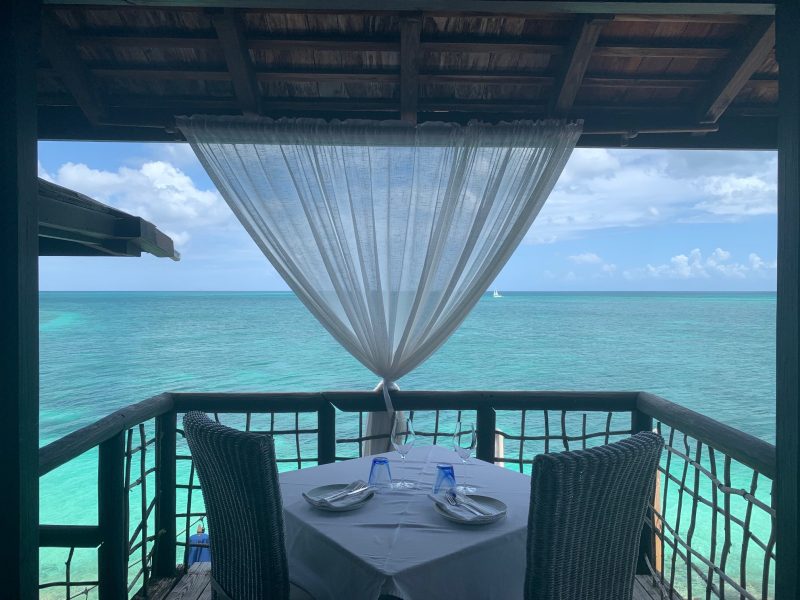 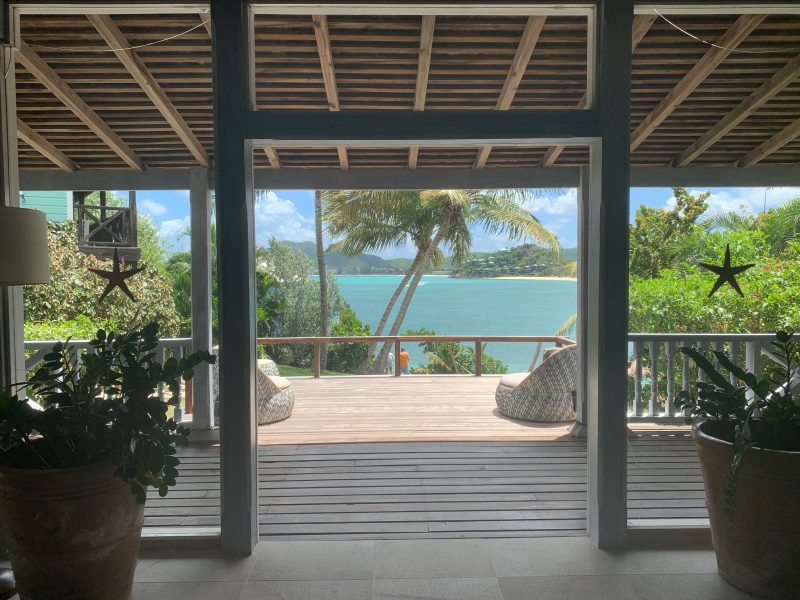 As we walked up to the grounds Vorn pointed out the Taxi men waiting by their cars and said, “Tax Driver, First Enemy. Dey don’t want me teachin’ you how to walk.” And we kept walking by as he waved and said some things to them in a strong accent vernacular that was English but barely. Then he led us up every step and introduced us to every worker in the establishment and told us to “look around and take pictures, maybe you come back here and have a dinner later.” It was definitely beyond beautiful. But all I could think at this point was that I had to pee and my water bottle was empty. We were also dirty and covered in sticky mango juice. We stood around in the front lobby for a while, no bathroom in sight just so he could call Sugar Ridge and ask them to meet us at The Nest. The Nest was all the way over on Valley Church Beach so we had a good 20 minutes or so to go, or so we thought. At The Nest our ride didn’t meet us so we walked all the way back to Sugar Ridge. 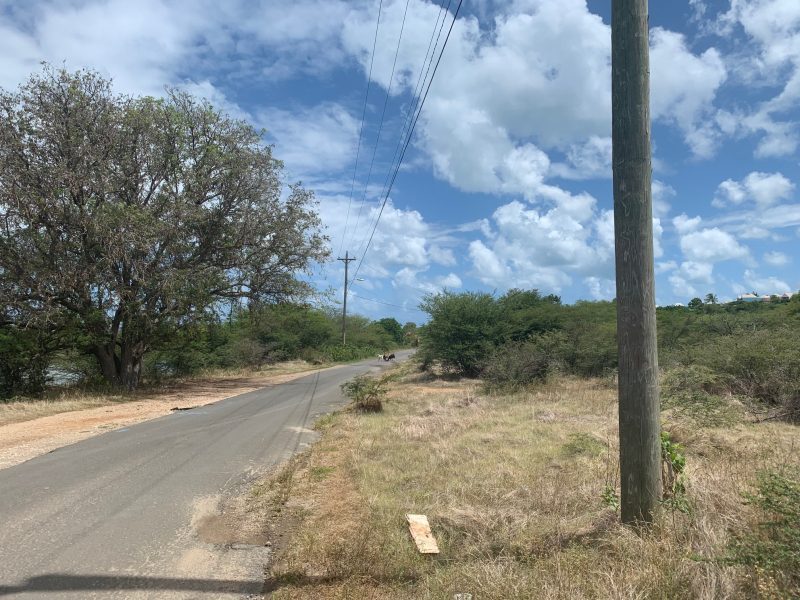 Here is our route according to Google Maps.  Natasha’s phone said we did 6 miles and 18000 steps and 26 floors (must of been a heck of an incline going through the mountains).  Either way we returned to the resort sunburned, tired, having to pee, and thirsty.  Luckily, there were bathrooms and we had the coconuts. Vorn chopped into them and we sat in the shade an drank, reviving after our long walk in the sun with our very interesting guide. 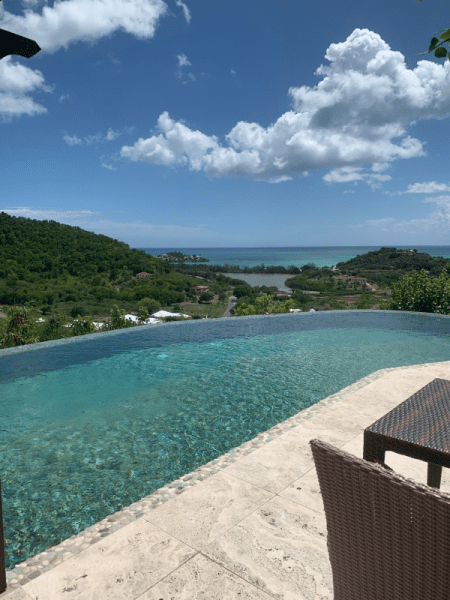 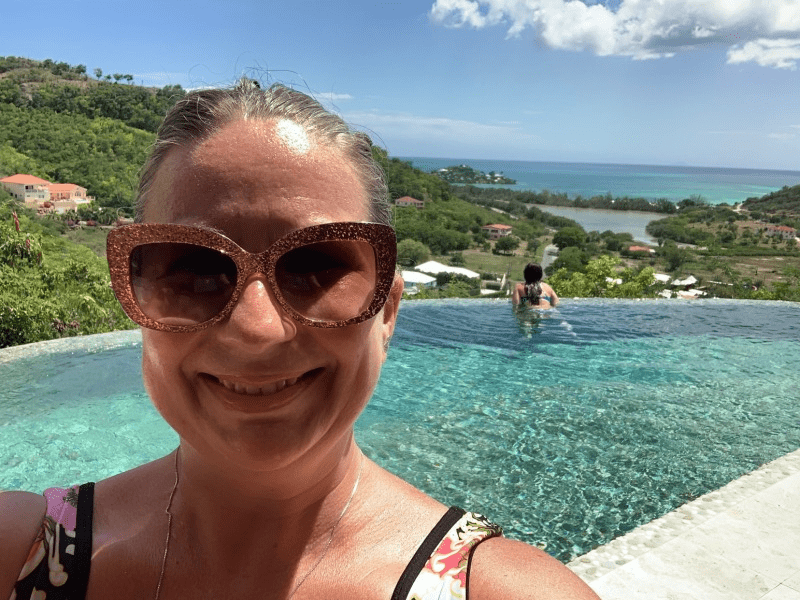 It was definitely an afternoon to check out the infinity pool at the top of the resort instead of going to the beach (being that we were both already tired and sunburned). It was a relaxing affair and quite the view, and I finally learned what an infinity pool actually is. We eventually got hungry, but didn’t want to “fine dine” again so we put our shoes back on and walked to Jolly Harbour to check out the off-season dining options that Google said existed.  One out of five actually was open – but it was casual, fun and tasty, and Jolly Harbour is quite pretty. 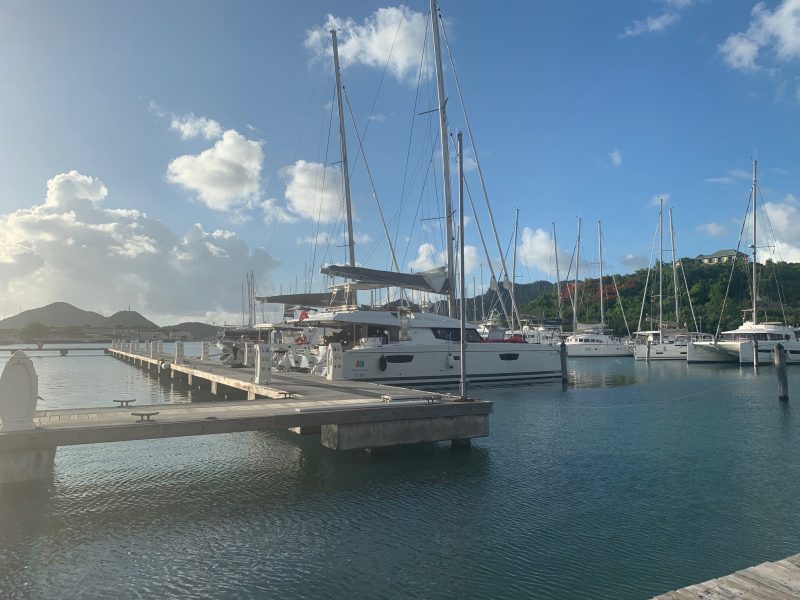 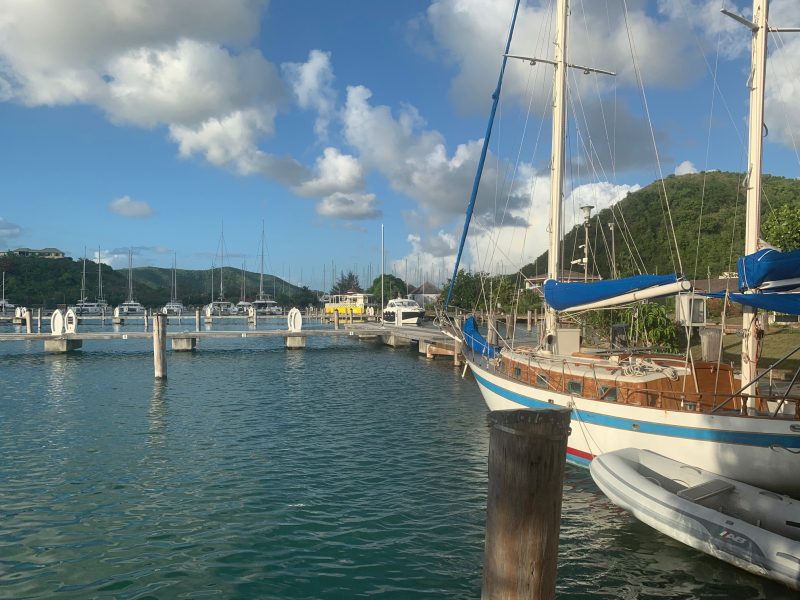 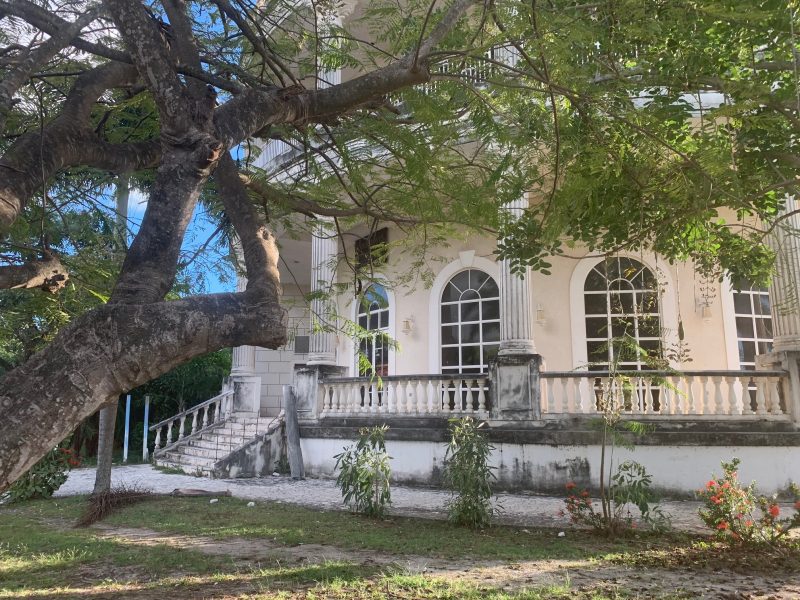 Even with the strange abandoned casino smack dab in the middle of everything collecting odd human characters on its front steps.

We ate at a place called the Crow’s Nest – it was cute and casual and the food was actually super yummy featuring burgers and local specialties like curry and jerk chicken (as well as lobster).  I ordered the West Indies Curry with lobster and Natasha got an Island Burger (which featured a coconut shrimp). 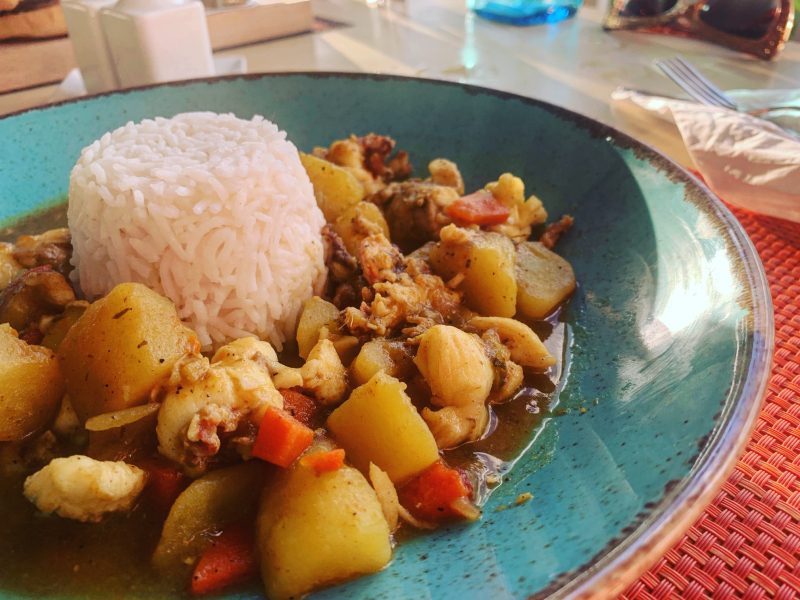 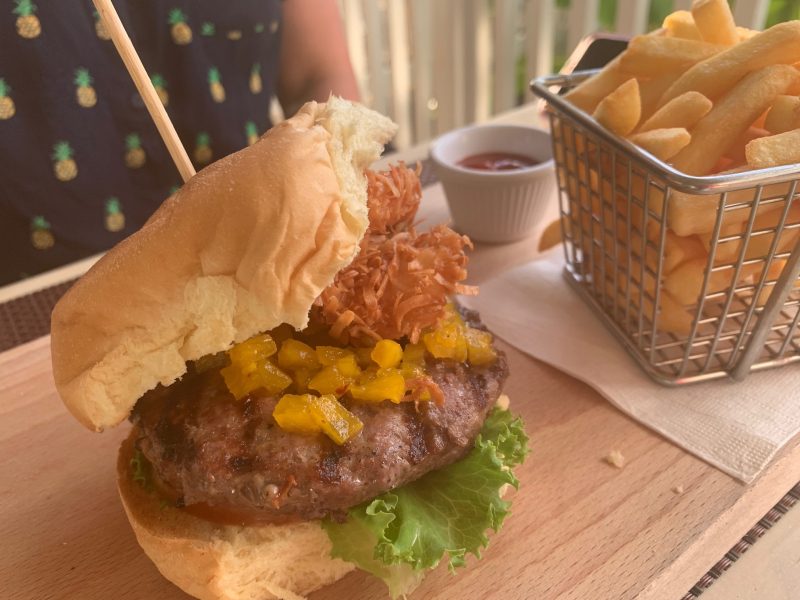 We left fully satisfied and ready to explore the local grocery store for water, juice and snacks. But meanwhile, we found a tree with strange tuber like growths dropping from it. Natasha hugged one before we saw how much the insects loved the strange fruits. 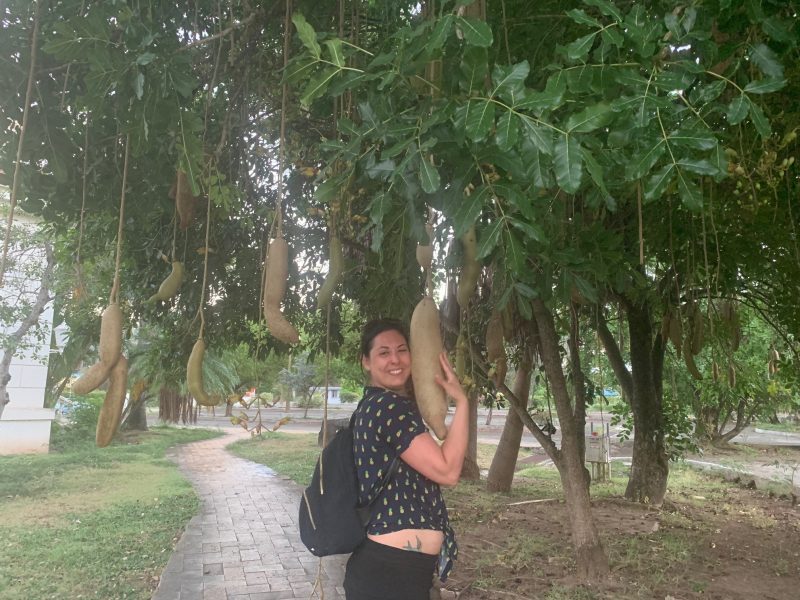 It had been a good day adventuring on island time.